» UNHCR Fear is over 21 countries speak for us only 15 against
by Vishwanarth Yesterday at 11:14 am

Global Moderator
Posts : 2620
Equity Stars : 10122
Reputation : 158
Join date : 2011-02-02
Age : 34
IMPERATIVES FOR ECONOMIC DEVELOPMENT
By Nimal Sanderatne
Once again the country is heading for a balance of payments crisis. The trade gap of nearly US$ 2.6 billion in the first three months of this year foreshadows a huge deficit surpassing last year's massive deficit of US$ 10 billion.

Import expenditure has continued to increase by 17 per cent owing to significant increases in intermediate and investment goods imports.

At the same time, there has been a decrease in both industrial and agricultural exports. Export earnings have declined by 1.4 per cent in the first quarter of the year.

While imports are still increasing, export earnings are falling. This is in contrast to the pattern of the trade imbalance in the first quarter of last year, when exports increased significantly but were inadequate to balance the huge increases in imports. As at present, indications are that the trade deficit may even exceed last year's deficit of US$ 10 billion to severely strain the balance of payments.


The trade gap of nearly US$ 2.6 billion in the first three months is a warning that unless imports are curtailed, there is a prospect of a massive trade deficit surpassing last year's record deficit of US$ 10 billion. This trend in trade performance for the first quarter is a pointer to a swelling trade deficit this year. If this trend continues, the trade deficit may reach US$ 11 billion and create a serious balance of payments problem.

Once again the Central Bank's expectations are that the huge trade deficit could be offset by worker remittances, earnings from tourism, foreign investments and other capital inflows. This may prove optimistic, as was the case last year, when the trade deficit was so large that capital inflows were inadequate to bridge the trade deficit to generate even a small balance of payments surplus.
Foreign borrowing may finance the current account deficit this year.

However, an overall balance of payments surplus achieved through foreign borrowing will increase the country's foreign debt burden and strain the balance of payments in the future. There has already been a significant amount of foreign borrowing at high cost that would add to the country's debt burden and debt servicing costs. The trade deficit has to be brought down by about 15 percent to achieve a current account balance through worker remittances, tourist and other services and capital inflows. This should be the objective of government policy. 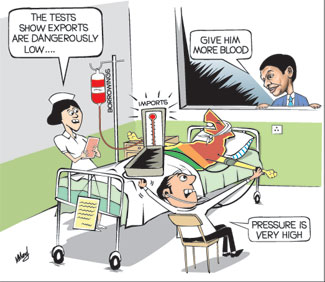 Hopefully, the reduction in consumer imports and the decrease in the international price of oil that we are currently witnessing, will assist in curtailing the trade deficit in the next three quarters of the year and bring it down to below US$ 10 billion. This is still large, but less of a strain on the balance of payments.
The prospect of declining oil prices in the international market is a hopeful development as it could reduce the import bill significantly in the second half of the year. Petroleum imports in the first quarter accounted for 27.5 per cent of total import expenditure. Reduction in the quantity imported and decreasing international prices would have a significant impact on the trade balance.


A fall in oil prices to below US$ 90 per barrel would reduce the country's oil import bill drastically and result in the trade deficit falling to below US$ 9 billion. If the magnitude of the trade deficit is contained below US 9 billion it could be offset by service earnings and capital inflows. If it overshoots this mark, the deficit could be financed only through foreign loans and other borrowings that increase the country's foreign debt burden.

The downside prospect is the failure of the monsoon. Drought conditions would reduce agricultural output and exports, and increase imports of food and petroleum. The latter is significant. If rainfall is low higher amount of thermal generation would be needed. This would add to the already high oil import bill. One should hope that it is only a delayed monsoon. 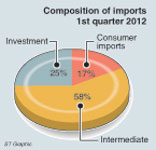 There would be a serious balance of payments problem if the trade deficit continues to balloon as in the first quarter. As the preceding analysis pointed out the fundamental reasons for the large trade deficit is the continuing increase in intermediate and investment goods imports. Unless these are contained there is little prospect of reducing the trade deficit. There must be stronger efforts to control intermediate and investment goods imports.

Expecting the large trade deficit to be offset by remittances, tourist earnings and capital inflows is rather optimistic. The only way that there could be an overall balance of payments surplus would be through the borrowing of banks, international aid flows, the remaining IMF loan instalment and a further line of credit from the IMF. However these are contingent liabilities and result in a debt burden.

The fundamental problem of a huge trade deficit must be addressed to ensure imports are brought into closer alignment with exports. Oil imports and international prices and curtailment of investments goods imports such as building materials and transport equipment are needed. Optimistic expectations of capital inflows should not deter actions to contain imports.
http://www.sundaytimes.lk/120610/Columns/eco.html