» STOCK market for beginners
by Asoka Samarakone Today at 11:30 am

» Sri Lanka: Tea industry faces multiple setbacks, may shut down
by ChooBoy Yesterday at 6:38 am

» Excerpts from Premier's Speech in the Parliament
by God Father Yesterday at 6:28 am

The budget deficit for the first two months of this year reached 2.14 percent of GDP, up from 1.62 percent a year earlier with recurrent expenditure growth outpacing tax revenue growth, data released by the Central Bank last Friday showed.

Recurrent expenditure grew 20.22 percent during the first two months of this year from a year earlier, while capital expenditure, or long term public investment, grew a healthy 62.32 percent.

The budget deficit for the two months amounted to Rs. 160.9 billion, up 51 percent from a year ago.

Last week the IMF said fiscal targets were under pressure due to falling imports and high interest rates.

IMF Mission Chief to Sri Lanka Dr. John Nelmes told journalists in Colombo last Friday (15) that revenue has been lower than expected due to falling imports, and rising interest rates have put pressure on recurrent expenditure. (See The Island of June 16, page 4).

Earlier this year, Treasury Secretary Dr. P. B. Jayasundera said the policy measures taken to contain a balance of payments crisis were revenue neutral and therefore would not impose undue pressure on government revenue, which is, going by the IMF statement, not proving to be the case.

According to Central Bank data released last Friday (15), the total outstanding debt stock of the government as at end February 2012 increased 17.56 percent from a year earlier to Rs. 5.53 trillion. Domestic debt was up 13 percent to Rs. 3 trillion and foreign dent grew 23.48 percent to Rs. 2.53 trillion.

The total outstanding debt stock as at end February 2012 amounted to around 73.78 percent of GDP. Government debt to GDP was 78.5 percent in 2011, which was a new low.

Maintaining the fiscal deficit target is crucial in order to ensure macroeconomic stability.

The IMF’s Dr. Nelmes meanwhile praised efforts made to contain a balance of payments crisis.

"I would give the government top marks for managing the bold policy changes that were critical to ensuring long term stability. The balance of payments and current account had come under pressure last year and in many countries such policy changes would be extremely difficult to implement because of the political and social implications involved. But these policy measures were needed and necessary and the government has done a good job in managing the changes," the IMF Mission Chief to Sri Lanka said.

Since February, the Central Bank floated the rupee, slapped a ceiling on commercial bank lending, imposed tighter limits on dollar net open positions of the banking sector and raised policy interest rates twice in a late effort to contain a growing balance of payments crisis. The Treasury too adjusted upwards domestic fuel prices and electricity tariffs and raised import duties on selected goods.

In response to a query raised by The Island Financial Review as to whether these measures would be enough to contain the balance of payments problem, Dr. Nelmes said: "My short answer is, Yes".

He said credit growth was slowing down and imports were showing signs of easing. 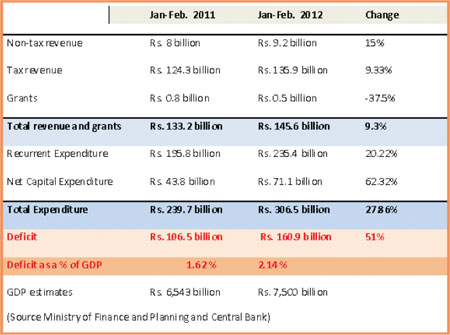 "Inflation would be high because of some of these policy measures. We forecast headline inflation at 9.5 percent by the year’s end. The Central Bank’s monetary policy stance has been appropriate but we feel monetary policy should continue to be tight in the short term to keep inflation under control."

The IMF said growth was expected to slowdown to 6.75 percent this year, lower than the 7.2 percent forecast of the Central Bank.

While the Central Bank and Treasury have gone on record that the rupee would stabilise around Rs. 125 to a dollar, Dr. Nelmes said the IMF could not make such a forecast as it was an impossible thing to do.

Sometimes, policy makers make such statements in order to calm markets or cool down expectations. This is a mild form of moral suasion and is known to work from time to time, a market analyst said. However, the Treasury has also said authorities would be ready to intervene should speculators drive down the rupee.

"Without shock-absorbers in car, when it hits a bump on the road the passengers insiders would hit their heads against the roof," Dr. Nelmes said.

The fallout of the European debt crisis would also impact growth and the balance of payments with a major share of exports catering to EU markets. Another major buyer of Sri Lankan goods, the US, is also seeing slow growth. "Unfortunately, this is beyond Sri Lanka’s control," Dr. Nelmes said.

He said remittances and tourism earnings remained buoyant while reserves would continue to grow.

The IMF Review Mission has left for Washington and would continue to monitor the developments here before taking their finding before the Executive Board on July 20, where the fate of the final tranche and the end of the UD$ 2.6 billion standby arrangement would be decided.

Dr. Nelmes said the government and IMF are exploring the possibility of commencing a monitoring programme thereafter.

"This is to assist Sri Lanka’s transition further in to a middle-income country status. We have not decided on the specifics of the programme at this stage," he said.

Senior Minister of International Financial Cooperation Dr. Sarath Amunugam has said, as reported earlier in The Island Financial Review, that the monitoring programme would involve an infusion of US$ 500 million, should Sri Lanka decide to draw.
http://www.island.lk/index.php?page_cat=article-details&page=article-details&code_title=54659