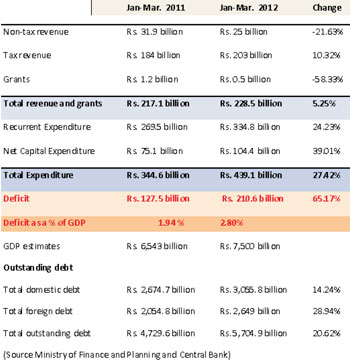 The budget deficit for the first quarter of the year reached 2.8 percent of GDP with revenue growth slowing down and expenditure growth racing ahead, data released by the Central Bank last Friday (22). The government’s fiscal deficit target for 2012 is 6.2 percent of GDP.

This could be a worrying sign with the deficit almost nearing the halfway mark of the full year’s target in just three months. Treasury Secretary Dr. P. B. Jayasundera has said that April was a difficult month as well, but he is confident that the budget deficit target would be met and the IMF seems comfortable with the government’s commitment in this regard.

A reported in these pages last May, Dr. Jayasundera said the government had to borrow Rs. 40 billion from the Central Bank and the market to finance seasonal obligations. By May, Rs. 38 billion had been settled, he said.

Total expenditure growth continues to race ahead of revenue growth at 27.42 percent year-on-year to Rs. 439.1 billion.

Recurrent expenditure amounted to Rs. 334.8 billion, up 24.23 percent from a year earlier while capital expenditure or public investment on infrastructure, increased 39.01 percent to Rs. 104.4 billion.

The IMF earlier this month said falling imports have put pressure on revenue while rising interest rates are pressurising expenditure, but the government had expressed its commitment to the IMF that the 6.2 percent to GDP budget deficit would be met.

Economists and institutions, such as the Central Bank and Institute of Policy Studies, have consistently highlighted the importance of sticking to budgeted targets. Before the 30-year conflict ended in 2009, governments have almost always been guilty of overestimating revenue and underestimating expenditure. Another trend during this period was that public investment was sacrificed for recurrent expenditure (salaries and pensions to a bloated public service cadre, interest payments on debt and subsidies).

The very late policy response to a balance of payments crisis last February is expected to cause fiscal slippages and also cause economic growth to slow down, but as these pages reported earlier this month, the IMF is confident that it would place Sri Lanka on a much more sustainable growth trajectory.

"Such front-loaded borrowing has strengthened expectations of fiscal slippage and an extension of market borrowing beyond the budgeted amount. While a successful sovereign bond issuance (US$ 1 billion) might provide some respite during Q3-2012, supply concerns are likely to persist for the remainder of 2012.

"Moreover, headline inflation seems to have reversed its trajectory and we believe hardening inflation would widen the term premia on T-bonds. Banking-system liquidity, which has been in deficit since the beginning of 2012, has pushed the overnight borrowing cost (call money rate) to a three-year high of 10.28%. If the CBSL maintains its liquidity stance for the remainder of 2012 then elevated funding costs would also contribute to a hardening of yields," the international bank said.

"The rates market response to the monetary policy announcement was muted, as it was in-line with market expectations. While stable policy rates are a positive for the bond market, we believe fiscal-slippage fears, hardening inflation and tight banking-system liquidity are likely to maintain upward pressure on the yield curve. On the back of these, we have raised our T-bond yield forecasts for the remainder of 2012.

"With supply likely to be the key driver of the rates market in the remainder of 2012, the shape of the yield curve will depend on the issuance profile. If the government continues its historical (and 2012 YTD) issuance pattern of extending duration, then we expect the yield curve to continue its bear-steepening trend," Standard Chartered Bank said.
http://www.island.lk/index.php?page_cat=article-details&page=article-details&code_title=55211