Big boost as US GSP is back on track

Global Moderator
Posts : 2620
Equity Stars : 10130
Reputation : 158
Join date : 2011-02-02
Age : 34
Sri Lanka’s external relations have received a boost following the decision by the US to continue with its duty free Generalised System of Preference (GSP) program for trade after a review that took over three years.

Following the loss of the European Union’s GSP+ a few years ago, the future of the US scheme had been in the balance with some fearing its end as well. 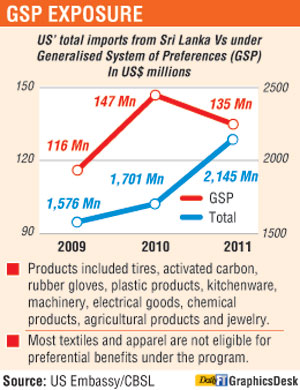 “The closure of the GSP country practice review of Sri Lanka was based on the Sri Lankan Government’s noteworthy efforts to address worker rights issues over the past few years. This welcome outcome to the review demonstrates that GSP remains an effective tool for engaging GSP beneficiary countries on worker rights,” Ambassador Kirk said.

The US action follows an interagency review of a petition filed by the AFL-CIO in 2008, alleging shortcomings in Sri Lanka’s recognition or worker rights.

A US statement said that over the course of the last few years, the Government of Sri Lanka has taken significant steps to improve worker rights environment in the country.

Among these steps are: Progress in initiating, investigating and resolving unfair labour practices cases; the establishment of trade union facilitation centres in each of the three largest Economic Processing Zones; improved procedures for conducting union certifications; and enactment of legislation to increase the fines for labour practices violations.

As part of the annual GSP review, an interagency US Government committee led by USTR receives and considers petitions seeking to withdraw or limit a country’s eligibility for GSP tariff benefits based on that country’s compliance with statutory eligibility criteria. One such criterion is whether a beneficiary country “has not taken or is not taking steps to afford internationally recognised worker rights to workers in the country”.

US imports from Sri Lanka under GSP totalled $ 135 million in 2011 and include tyres, activated carbon, rubber gloves, plastic products and kitchenware. In comparison to overall exports of $ 2.14 billion, shipments which came under GSP scheme were only 6.2%. However in 2010, the share amounted to 8.6% as GSP-benefits enjoying products export value was $ 147 million.

Under the GSP program, up to 5,000 types of products from 128 beneficiary developing countries are eligible for duty-free importation into the United States. In 2011, the total value of imports that entered the United States duty-free under GSP was $ 18.5 billion.