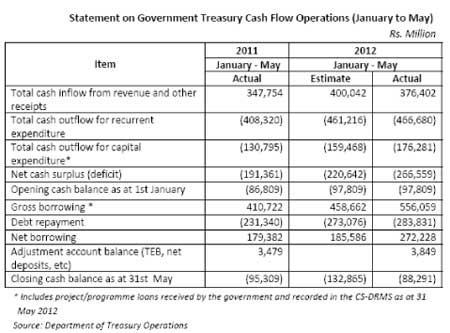 Off target heavy borrowings have brought the Treasury’s cash deficit well below targeted levels for the first five months of this year and the corresponding period of last year, as overestimated revenue and underestimated expenditure continue to characterise the government’s fiscal operations, although to a lesser degree.

As reported last Monday the budget deficit for the first four months of this year expanded to 3.8 percent of GDP, a worrying trend considering that the target for the full year was 6.2 percent. The Treasury said it would meet this target, and the IMF last month said it had faith in the government’s fiscal commitments.

According to the Ministry of Finance and Planning, the total cash inflow into the Treasury was Rs. 376.4 billion during the first five months of this year, 5.9 percent lower than the Rs. 400 billion estimated for the period.

A problematic characteristic of fiscal operations in the past was the often always overestimated revenue and underestimated expenditure, and capital expenditure being shaved-off to meet recurrent expenditure. Since 2010, the government has been able to rein in its fiscal indiscipline, termed the ‘bane of macroeconomic stability’ of the country.

The Treasury’s cash flow for the first five months of this year is showing the worrying signs of the past, but the deviations are not alarming and public investments, or capital expenditure spending has not been sacrificed to meet the recurrent expenditure obligations. However, the Treasury has engaged in heavy borrowings during this period.

Debt repayments during this period amounted to Rs. 283.8 billion, up 3.9 percent from the original estimate of Rs. 273 billion.

Net borrowings from January to May 2012 amounted to Rs. 272.2 billion, a huge 46.7 percent increase from the Rs. 185.6 billion originally estimated for the period.

According to the Treasury: "Cash inflow to the government Treasury in the first five months of 2012 increased by 8 percent compared to the same period in 2011. Cash deficit after outflow for recurrent and capital expenditure amounted to Rs. 266.6 billion, which is higher than the corresponding figure for the year 2011 by Rs. 75.2 billion. This was mainly due to the increase in cash outflows for recurrent and capital expenditure by 14 percent and 35 percent, respectively, compared to the corresponding period of the previous year. The overall closing cash balance (deficit) as at end May 2012 was Rs. 88.3 billion, which is lower than the cash deficit prevailed at the end of May 2011 by Rs. 7.0 billion".
http://island.lk/index.php?page_cat=article-details&page=article-details&code_title=55896