* Current expenditure up 24.7% due to higher and front loaded interest payments of Rs. 31 b; high wage and welfare expenditures

* Assures full year deficit target of 6.2% of GDP will be met due to higher revenue and moderation of expenditure expected in 2H

Public investment up 46% to Rs. 152 b; Welfare payments and subsidies up 22% to Rs. 32.5 b
President and Finance Minister Mahinda Rajapaksa’s 2012 Budget for the country so far has gone haywire owing to both domestic and global reasons and largely impacted by policy responses though Treasury has assured the targeted deficit of 6.2% could be met by year end.

The expansion in the deficit midst challenging conditions in 2012 so far comes after considerable improvement especially revenue in the first four months of last year.

The Budget deficit of 2.7% last year was also lower than 3% posted in the comparable period of 2010.

However Ministry of Finance in its statutory Mid Year Fiscal Report released on Friday defended itself saying the fiscal performance has to be analysed considering the impact of the measures introduced by the government in February 2012 to contain the trade deficit of the country, which was widened significantly in 2011.

The measures included the pursuance of greater exchange rate flexibility, tightening of monetary policy through increases in Central Bank policy rates and the pursuance of strategies to moderate bank credit growth as well as adjustments in domestic petroleum, electricity and transport prices to reflect the developments in the international market. “These measures, together with the depreciation of the Rupee in line with the exchange rate flexibility during the first five months of the year, had a mixed impact on the government fiscal operations,” the report added.

Finance Ministry attributed the sharp rise in recurrent expenditure to higher and front loaded interest payments that amounted to Rs. 31 billion. The non interest expenditure increased reflecting the high wage and welfare expenditures. The Government spent Rs. 112.1 billion (up 4%) on salaries and wages of public servants during the first four months. This was due to the increase in the special allowance by 10% of the basic salary of public servants of non staff category and 5% of the basic salary to staff category from January 2012. Expenditure on pension payments increased by 15% to Rs. 37.1 billion due to the full impact of 22,773 of new retirees in 2011 and partial impact of 8,100 new retirees in the first four months of 2012. The increase in pension payments by Rs.500 to those who retired before 01.01.2004 and by Rs.250 to the pensioners retired during the period between 02.01.2004 and 31.12.2006 also contributed to this increase.

The expenditure on welfare payments and subsidies of the government in the first five months of the year totalled at Rs. 32.5 billion, up by 22% over the corresponding period of last year.

The capital expenditure and net lending increased at a higher rate of 50.8% largely reflecting the higher utilisation of foreign funds earmarked for development projects. 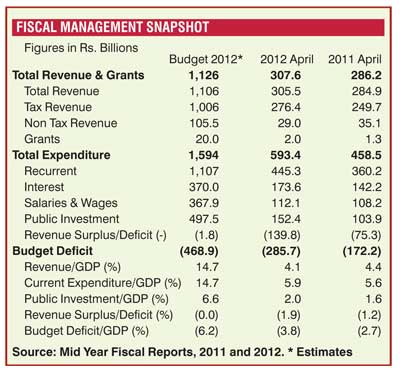 A redeeming feature in the expenditure side is public investment rising by 46% to Rs. 152 billion.

Though Mid Year Fiscal Report gives revenue up to May, and some expenditure also up to May the deficit revealed is for four months (January to April).

“The first four months outcome reflects the impact of revenue lags and expenditure leads and higher revenue and moderation of expenditure is expected in the second half of the year. Hence, the fiscal operations in the year as a whole are expected to remain consistent with the targeted deficit of 6.2% of GDP,” Finance Ministry said.

In terms of Section 10 of the Fiscal Management (Responsibility) Act No. 03 of 2003, the Minister of Finance is requested to present the Mid‐Year Fiscal Position Report to the public by the last day of June of the year and thereafter lay before Parliament.

The purpose of this report is to provide updated information on the Government’s fiscal performance as per the fiscal strategy of the Government. The report contains the performance of Government revenue, expenditure, cash flow operations and borrowings during the first four months of the year 2012. The report also provides updated information, depending on the availability of information, relating to macroeconomic performance, price developments, foreign aid, government debt and official reserves.
http://www.ft.lk/2012/07/04/budget-bloats/#more-96148