» A Balanced & Diversified Model Portfolio for a longer term investor
by EquityChamp Today at 10:56 am

» Dividends Announcements:
by Wickyz Today at 10:36 am

"The upgrade of PB’s rating reflects Fitch’s reassessment of government support to PB in light of its growing importance as Sri Lanka’s second-largest bank. This is underpinned by the agency’s expectations that PB’s role in the post-war development economy will likely further strengthen its linkage with the Sri Lanka government (‘BB-’/Stable Outlook)," the ratings agency said in a statement last week. 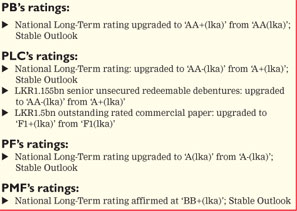 PB’s rating reflects Fitch’s expectation of timely support from the government of Sri Lanka if required, given its government ownership, importance to the government in light of the abovementioned role, and high systemic importance (18% of system assets and deposits at end-2011). Changes to Sri Lanka’s sovereign rating will therefore result in changes to PB’s ratings.

PB’s National Long-Term Rating may be upgraded further if there is a demonstration of preferential support for PB.

The upgrade to PLC’s and PF’s ratings reflects the increased capacity of their parent PB to extend support, as indicated by the latter’s rating upgrade. Fitch’s view of support is premised on PLC’s close integration with, and strategic importance to, PB, and PF’s strategic importance to, and integration with, PLC. PB’s majority ownership of PLC and PF also supports the ratings.

The affirmation of PMF’s rating reflects Fitch’s expectations of a moderate level of support from PB due to its low integration with, and limited strategic importance to, PB. Fitch’s view of support is based on PMF’s association with, and the consequent reputation risk to, PB’s franchise. PMF’s rating also reflects its weak standalone financial profile.

Both PLC and PF are strongly associated with the PB brand. PB owns 75% of PLC, and effectively owns 66.5% of PF through PLC. At end-2011, the PLC group accounted for 27% of PB’s consolidated post-tax profits and 14% of net advances. At end-March 2012, PLCand PF’s aggregate retail funding amounted to over LKR23bn, and funded 24% of the PLC group assets.

PB’s capacity to support stems from the government’s own capacity and willingness to support the bank - through which support is expected to flow into both PLC and PF. Fitch believes it is highly likely that government support could flow through to PLC via PB, and to PF via PLC, mainly due to the subsidiaries’ strategic importance and linkages to PB and the consequent reputation risk to the government if PLC or PF should fail.

The two-notch differential between the ratings of PB and PLC, and of PLC and PF reflects the possibility of delay in timely government support due to regulatory restrictions between the entities (e.g. maximum exposure limits) or administrative difficulties usually seen in layered support structures.

Changes to PB’s ratings may result in corresponding changes to PLC’s ratings, providing the linkages between PB and PLC remain intact. PLC’s ratings may be downgraded if PB gives up its controlling stake in PLC, or if its strategic importance to PB diminishes over time. The same is true of PLC’s and PF’s ratings.

Deterioration in PMF’s profitability and/or deterioration in its asset quality and solvency may result in a negative rating action. PMF’s rating could be affected by a change in circumstances that would warrant a review of Fitch’s expectation of support from PB.

PB is a key lender to the government, with assets amounting to LKR663bn at end-2011, accounting for 18.5% of the licensed commercial bank sector. PLC is the largest non-bank financial institution (NBFI) by advances and accounted for almost 20% of NBFI sector assets. At end-March 2012 PLC’s consolidated assets stood at LKR96bn. PMF, which operates as a licensed finance company since April 2012, had a consolidated asset base of LKR2.9bn at end-March 2012."
http://www.island.lk/index.php?page_cat=article-details&page=article-details&code_title=56354