» GLAS will be winner with Super Gain.
by Chithi Today at 9:05 pm

Monday’s turnover was relatively lower with Laugfs non-voting counter attracting investor interest upon declaring a dividend of Rs. 1.50. Both indices closed in opposing directions as signs of circumspect took light. Retail counters were actively traded and foreigners were net buyers.
Tuesday saw the market regulator confirm claims made by the news agencies that it decided to extend broker credit to 120 days from the prevailing 30 days. This information did not help to improve market sentiment as both indices closed lower with a low turnover. Foreigners were net sellers this day to the tune of Rs. 9.7 million.

Market continued its sluggish ways into Wednesday’s trading as well. Large deals on Sampath Bank took place and are thought to be foreign selling as foreigners were net sellers with Rs. 109 million. Yields on all three maturities were higher on this day’s auction showing signs the market may face tougher times ahead. Foreign participation rose to around 30% of market turnover buoyed by sales on Sampath Bank.
Thursday saw a reverse in the momentum as both indices recorded robust gains with a healthy turnover of Rs. 383 million. Retail counters were actively traded throughout the day although few blue-chips continued to show selling pressure. Foreign selling on Sampath Bank picked up on this day with foreigner being net sellers of Rs. 216 million.

Industry professionals met with the President today as market was rallying on retail heavy counters. However, the market momentum lost steam as both indices closed on the red with many blue-chips experiencing selling pressure. Industry officials are however positive from the outcome of the meeting.
ASI lost 2.89 points (0.06%) to close at 4,888.22, MPI lost 21.45 points (0.5%) to close at 4,309.59 and the S&P index gained 8.26 points (0.3%) to close at 2,768.44. Turnover was Rs. 284 million.

Foreign participation stood at 15% and were net buyers of Rs. 9.6 million.
Market saw selected blue-chips showing selling pressure throughout the week with retail heavy counters also showing volatility. The rupee strengthen against the dollar during the latter part of the week to close at Rs. 131 levels with expected inflows from the Sovereign bond sale and Loan note of People’s Leasing Company. Foreigners were net sellers for the week as a result of large blocks of Sampath bank being sold in the market. 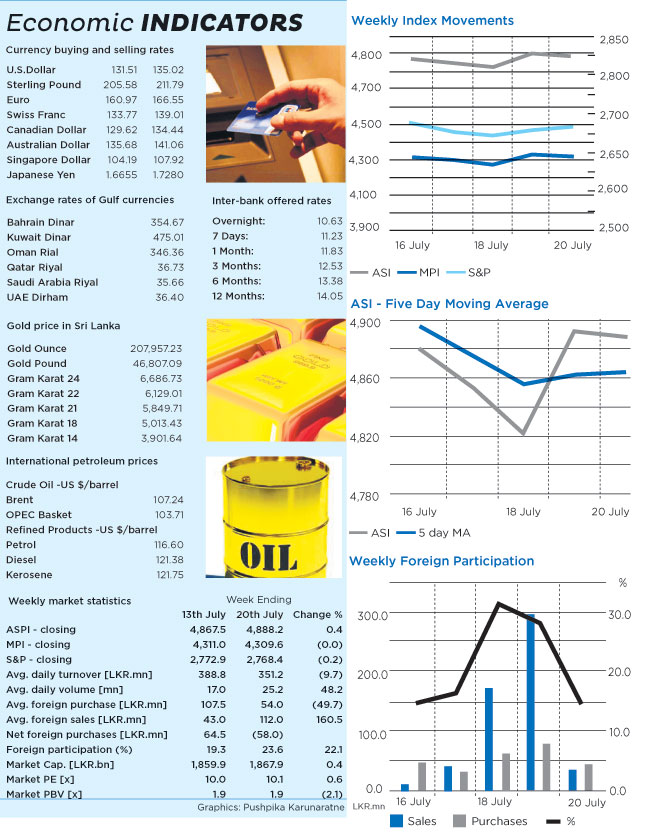