Posts : 6053
Equity Stars : 14971
Reputation : 770
Join date : 2012-02-14
The recent US$ 1 billion sovereign bond sold by Sri Lanka would potentially ease pressure on interest rates and stabilize the exchange rate despite an increase in the foreign debt position of the country, a report by a brokerage said.

According to CT Smith Stockbrokers, which has a wide foreign clientele, the recent spike in interest rates was largely due to the lack of liquidity in the money market. 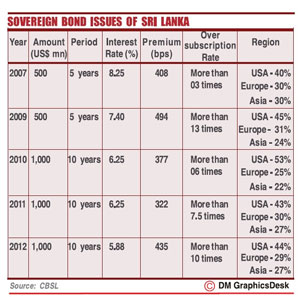 “Hence, an increase in foreign capital inflows is likely to improve the liquidity position in the money market, imposing downward pressure on domestic interest rates,” the report noted.

Sri Lanka last week received the final tranche of US$ 415 million from the International Monetary Fund (IMF) as per the Stand-byAgreement, which the country successfully completed.

Apart from that, the Sri Lanka Ports Authority (SLPA) is expected to raise US$ 1 billion through a bond issue in October 2012 for a port city project, where it plans to reclaim the sea front of Galle Face Green.

The country also expects a further funding of US$ 500 million from the IMF as an Extended Fund Facility (EFF), following the completion of the Stand-By-Facility.

“The above capital inflows along with the current bond are likely to stabilize the exchange rate by boosting foreign reserves,” the report said.

However, it noted that the foreign debt position of the country would potentially increase due to the current bond issue coupled with lower expectations of Sri Lanka’s Gross Domestic Product (GDP) growth.

A recent document submitted to the Parliament showed that Sri Lanka has to repay in excess of US$ 15 billion to foreign lenders such as China and the Asian Development Bank (ADB).

According to the Central Bank, the issue was oversubscribed by more than 10 times amidst strong demand, resulting in the largest order book and the highest number of investors that a Sri Lankan sovereign bond has attracted.

As announced earlier, part of the bond will be used to repay the country’s maiden five-year US$ 500 million Eurobond issue, maturing this October and other short-term debt will be used for infrastructure projects.
http://dailymirror.lk/business/stock/20546-bond-bonuses-.html