» GLAS will be winner with Super Gain.
by ONTHEMONEY Yesterday at 7:16 am 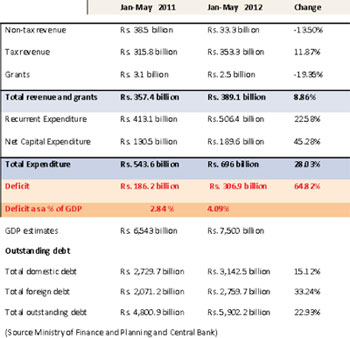 The budget deficit for the first five months of this year grew 64.82 percent to reach 4.09 percent of GDP as expenditure growth continued to outpace revenue growth, although small signs of consolidation are emerging, latest data released by the Central Bank showed.

The government is expected to contain the budget deficit at 6.2 percent of GDP and several analysts have appointed out that this target would be missed, for instance Standard Chartered Bank has forecast the deficit would reach 7 percent of GDP.

However, the International Monetary Fund (IMF) which does not look at the fiscal target per se, but how the deficit is financed by domestic resources believes the government would be able to meet the 6.2 percent deficit target by the end of this year, according to end June data made available to it, if it continues to remain committed to the target.

A recent IMF staff report on Sri Lanka says: "The authorities’ commitment to meet the 2012 budget deficit target is commendable, particularly given the weakening revenue and growth outlook and higher interest expenses. The target is achievable given the authorities’ track record of prudent expenditure control. However, decisive improvements in revenue administration and base widening are needed to sustain fiscal consolidation while financing increased infrastructure investment, key for supporting robust growth over the longer run. In this context, staff welcomes the authorities’ intention to strengthen VAT administration, and supports their request for IMF technical assistance".

The IMF said government revenue is likely to fall short of the year-end target by ¾ percent of GDP while expenditure could increase by 0.3 percent of GDP on raising interest rates.

There are some signs that the government is consolidating its fiscal performance when comparing year-on-year growth rates as at end May 2012 and April 2012.

Loans to the government from off shore banking units declined 4.5 percent to Rs. 129.3 billion from Rs. 135.5 billion a year earlier.