» Expolanka to continue its winning streak
by samaritan Today at 7:22 am

MSCI’s broadest index of Asia-Pacific shares outside Japan inched up 0.2 percent after world stocks rose to a three-month high on Tuesday, shrugging off soft data showing further contraction in Italy and a fall in factory orders in Germany. 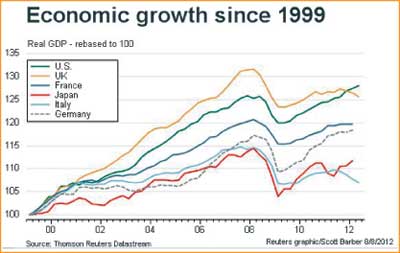 “Despite the lack of fundamental improvement, equities continue to grind higher, driven in recent sessions by cyclical sectors and small caps, which had lagged the recovery back toward the April 2012 highs,” Barclays Capital analysts said in a research note.

“The possibility that the market is looking past policy uncertainty leads us to conclude that investors should not fight the rally,” they said.

As risk appetite recovered on hopes that global policymakers will act to help resolve the euro zone’s three-year debt crisis, demand weakened for safe-haven assets such as U.S. Treasuries and German government bonds, driving benchmark Treasury yields up to a one-month high on Tuesday.

Asian credit markets firmed, with the spread on the iTraxx Asia ex-Japan investment-grade index tightening by 2 basis points and hovering near its lowest since March.

Oil prices fell after racing up to a 12-week high on Tuesday on expectations of further economic stimulus, supply worries linked to an expected drop in North Sea output next month, Middle East tensions and the Gulf of Mexico hurricane season.

Brent crude futures fell 0.4 percent to $111.54 a barrel and U.S. crude eased 0.4 percent to $93.28 a barrel.
In the absence of major economic data or events, investors will wait for data from China due on Thursday, including industrial production, retail sales and inflation, for indications the world’s second-largest economy can pick up momentum in the second half of the year from a lacklustre first half.

On top of hopes the European Central Bank will soon start buying bonds to help contain surging borrowing costs for Spain, sentiment was boosted by Italy’s Prime Minister Mario Monti winning a confidence vote on
Tuesday on a bill to cut spending, which comes in addition to his austerity package passed in December.

But markets were still worried by Germany continuing to oppose any large-scale bond-buying programme while Greece is walking a tightrope over its deficit chasm, awaiting global creditors to approve bailout funds.

A Greek exit from the euro zone would be manageable but is not desirable, Eurogroup President Jean-Claude Juncker said in an interview with Germany’s WDR television posted on the Luxembourg government’s website on Tuesday.

“For now, the disparate and ‘off the cuff’ talk from the politicians indicates that the debate on what to do is still ongoing. We don’t see the debate over Greece affecting risk sentiment much more over August. The risks for later in September and beyond remain real however,” Societe Generale said in a research note.
http://www.ft.lk/2012/08/09/asian-shares-hit-three-month-high-as-policy-optimism-persists/