» What happens in the market is absolutely 100% out of your control. Stock market for beginners
by Asoka Samarakone Today at 9:45 pm

» GLAS will be winner with Super Gain.
by Chithi Today at 9:05 pm

Foreign participation was at very high levels throughout the week buoyed by interest on John Keells Holdings. Retail investor sentiment remained weak with interest rates seen rising and household debt levels remaining at high levels. Retail activity was seen on selected counters although the overall sentiment was subdued. The market remains at very attractive prices as the overall market price earnings ratio was around 9.8X as at end of trading on Friday (today). The Sri Lankan equity market stands as one of the cheapest in the region which justifies the significant buying interest from foreign funds.

Market opened trading on Monday with premier blue-chip John Keells Holdings leading the way attracting plenty of foreign interest. Indices were marginally lower on this day with a modest turnover of Rs. 353.8m. Foreign participation was at 52% mainly attributable to the buying interest on John Keells Holdings. Activity on all other counters were dismal John Keells Holdings contributed 60% of total market turnover.

Market continued to slide on Tuesday although plenty of buying interest was seen on Ceylon Tobacco Company which is now the second most valuable listed entity. John Keells Holdings continued to attract foreign interest at the Rs. 185 mark. Retail buying interest was seen on the companies related to Renuka Holdings. Foreign participation remained high on this day as well. Meanwhile, the Central Bank left policy rates unchanged in a bid to cool inflationary pressures which have arrived as a result of the prevailing drought.

Turnover levels dropped on Wednesday as activity on John Keells Holdings which was seen in the prior two days were not seen on this day. Blue-chip Bukit Darah dipped on this day on thin volumes. Foreign participation also dropped today although they still remained net buyers. Meanwhile, yields of all three maturing Treasury bills edged higher on this day’s auction. 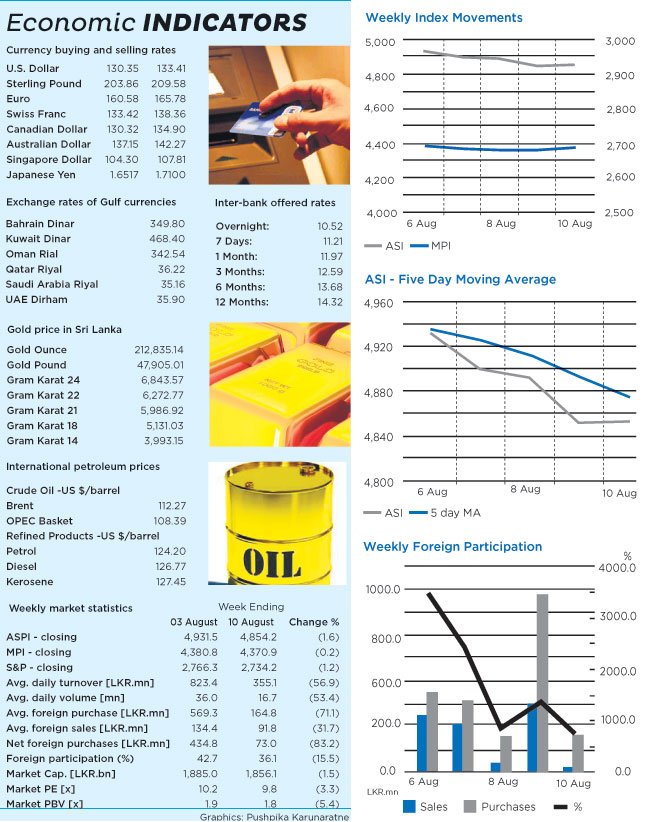