» BEST OFFERS FOR BANKING INSTRUMENTS
by Mohammed020 Today at 1:58 am

» Lubricant oil Prices increases for third time.. Keep eye on Industry
by rajithasahan Today at 12:17 am

» GLAS will be winner with Super Gain.
by Chithi Yesterday at 10:39 pm

» NIFL is about to run towards ATH
by Kethy Yesterday at 10:29 pm

» In the vicinity listing of LOCH – “LOLC CEYLON”
by Kethy Yesterday at 10:27 pm

» Maharaja after long time
by stockchaser Yesterday at 9:56 pm

» Fertilizer issue over !! Buy plantations
by Emdmadusanka Yesterday at 8:33 pm

If the general investing and savings public believes the Colombo Stock Exchange isn’t attractive, then nearly 50 stocks are likely to prove this incorrect, especially given their performance during the past month.

The reason is that these select stocks have offered well over 10% return within a month (some as high as 91%) and in this performing portfolio are some fundamentally sound stocks with good upside.

The price appreciation by these stocks (see table) reflects they are higher than ordinary savings or even now jacked up rates for Fixed Deposits. These stocks have also beaten the market’s near 20% year-to-date negative return very comfortably. 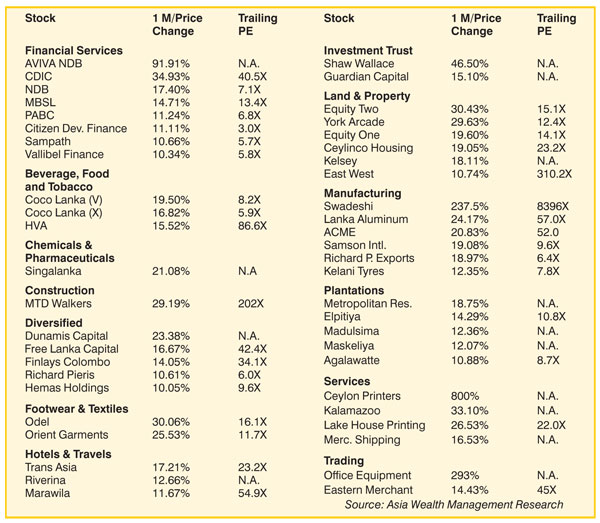 Some stocks in the selection, however, may have risen for extraordinary reason, and are illiquid, whilst some as per their Price Earnings Ratio (PER) are unlikely to be on advisors’ list too.

Nevertheless, the list shows there are still opportunities for a decent return in the Colombo Bourse out of around 200 actively traded stocks.

The Daily FT found nearly 50 stocks which have offered over 10% return during the past month, whilst within the league of the fundamentally sound, three stocks had offered over 20% return year-to-date.

The premier blue chip JKH’s return year-to-date is an impressive 14.6% whilst during the past month it was nearly 10%.

Acuity Stockbrokers said last week renewed interest was evident amongst investors with all three indices moving up over the week. The ASPI increased 1.50%. The MPI moved up 4.10% while the S&P SL 20 Index increased by 2.12%.

Softlogic Stockbrokers said the Colombo Bourse, trading at a trailing PER of 10.8X, was now titled as an attractive investment destination amongst foreigners as they were now seen seeking their specific favourite stocks such as John Keells Holdings and Distilleries (trading at NAV).

“However, the local investors are lacking the buying spirit as they watch the foreigners happily hoarding on the discount. Latter week breather of foreigners would stir up again once the SEC management board settles,” it said.

“We widely favour the high Dividend Yields (DYs) during a rising interest rate environment as this, whilst we advice (investors) to remain hawk-eyed on the growth and value stock mix of the counters trading at bargains for a long-term reap,” Softlogic Stockbrokers said.

“Although we view investment opportunities mainly from a bottom-up perspective, at a macro level, we expect economic growth to continue notwithstanding our expectation of a rise in inflationary pressures due to cost push factors caused by the rupee depreciation and high oil prices which will impact the balance of payments,” DNH said.

With the majority of the 2Q2012/1Q2013 corporate results already having been released, DNH said it was time to pick out the winners from the losers again.

“Given the fact that most investors would now agree that the potential for short-term trading opportunities are markedly limited, selecting medium to longer term investments would depend on a number of parameters, mostly top line and the sustainability of the bottom line,” it said.

“While we do not rule out the importance of earnings as a strong indicator of growth, it is highly important to determine the source of profits, whether a result of actual top line growth or an increase in other (mainly FX) income or a dramatic cut in costs that could have a negative impact on productivity in the longer term,” DNH said.

“Stripping off the ‘other’ income component, the majority of companies appear to still have performed reasonably well. Consequently, we advise investors to focus on companies with a sustainable earnings model supported by firm top line growth and not overly relying on nonrecurring income generation to support the bottom line,” DNH added.

“The Bourse is in a position where year-to-date return has come to a negative circa 18.9% and volumes and turnover levels are barely significant. Retail investors are mostly absent in trading, whilst local high net worth investors and institutional investors are holding back from big moves,” it said.

“We observed a sudden unexpected upsurge in the market during the week likely responding to the news over the SEC Chairman’s intention to resign. Our concern is whether it is a valid reason for the market to turn its direction and if it had been the reason all this time for the long prevailing downturn in the market,” Asia said.

“If that is the reason, why are foreign investors accumulating fundamental stocks? Are they reaping the benefits of prevailing attractive valuations, where the trailing market PE is at 11.38x and PBV at 1.84x? So the question arises, haven’t foreign investors lost confidence over the CSE?” Asia said.

“Therefore, to top it all, the market is attractive with stocks having fundamental backing performing satisfactorily. The Sri Lanka economy is volatile, being affected by the global economic uncertainties, yet the overall outlook is still supportive for businesses,” it added.

According to Asia, the reason for the absence of retail investors is likely due to their lost liquidity spun over lost portfolio values, with majority of the investors facing margin pressure.

“Therefore, towards a solid market recovery, we expect new funds to flow not purely from foreign but from the local cash rich high net worth individuals and institutional investors. It is still a big question mark why the aforementioned high end local investors are sidelined. Can we put it as a deliberate attempt by a coalition of investors trying to exert pressure on the market? Yet the answers to these are barely known,” Asia said.

“Considering all of the above, we believe that the solution lies with the regulators, who should come up with regulations adhering to global investment standards and be firm in their decisions, and to be independent and unbiased. Until such time, a revival in the market would be a question,” Asia Wealth opined.
http://www.ft.lk/2012/08/20/better-bourse-returns-bared/

If a stock has depreciated from Rs. 100 to 50 in 7 months, and during the 8th month if it has increased in value to 60, we can say that it has recovered from the slump partially. In spirit, we cannot say that it has given 20% return in one month, even if it is correct technically.

If a stock has depreciated from Rs. 100 to 50 in 7 months, and during the 8th month if it has increased in value to 60, we can say that it has recovered from the slump partially. In spirit, we cannot say that it has given 20% return in one month, even if it is correct technically.

Take a penny counter ard Rs. 1/- now and if we see a rising market, in coming months this could go to 1.50 with the trend. So its also a 50% gain but the initial investment is low..