Market opened on Monday with large deals on Asiri Hospital Holdings and Asha Central. The positive momentum was seen continuing into this day. All indices closed higher with net foreign buying amounting to Rs. 980.2Mn with a formidable turnover of Rs. 1,763.4Mn.

The market saw mixed reactions on Tuesday but not before most counters showing active trading. Many fundamentally sound counters saw renewed investor interest. Foreign activity was lower on this day but foreigners remained net buyers.

John Keells Holdings dominated trading on Thursday with positive activity on the counter seemed to be rubbing off on other counters as well. The market lost steam towards the latter part of trading with indices closing in opposite directions. Foreign activity picked up on this day and foreigners remained net buyers.

The market took a breather on Friday with all indices closing in the red. John Keells failed to reach the Rs. 200.00 barrier and saw its shares trading at lower levels. Turnover was also lower Friday as only one private deal took place.

Notable contributors to turnover were John Keells Holdings with Rs. 73.9Mn, Distilleries with Rs. 25.7Mn and Commercial Bank with Rs. 21.9Mn. Most active counters for the day were Hydro Power Free Lanka, Distilleries and Browns Investments.

Cash map for Friday was 63.0%. Foreign participation was 27.9% of total market turnover and foreigners were net sellers of Rs. 63.7Mn. 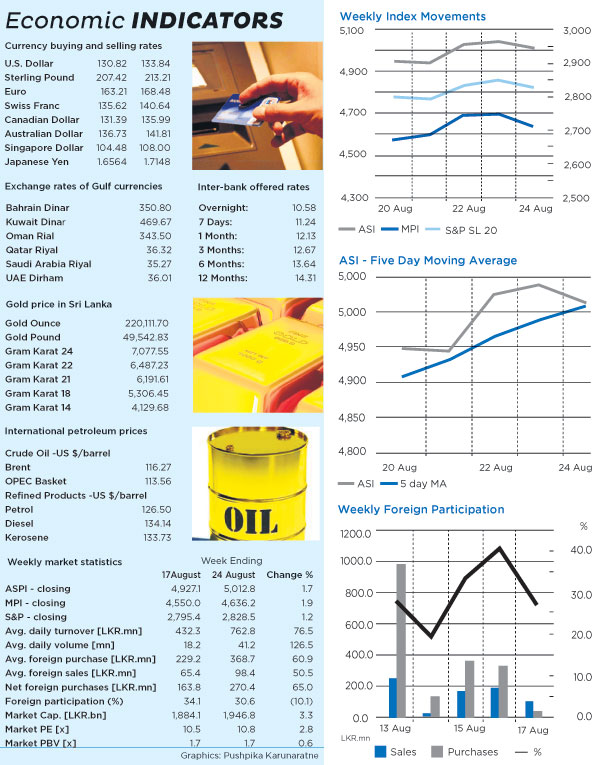