Despite original reservations by some that President Mahinda Rajapaksa shouldn’t have met with capital market stakeholders, the Colombo stock market has proved otherwise, with the most bullish being foreign investors.

Since the 20 July discussions with capital market players by the President and subsequent meetings chaired by Finance Secretary Dr. P.B. Jayasundera, net foreign buying had risen by 20% or Rs. 4.8 billion to Rs. 28.5 billion.

After the market closed on 19 July, the benchmark All Share Index (ASI) had risen by 2.4% whilst the more active Milanka Index had gained sharply by 7%. Market’s value had swelled by Rs. 48 billion between 19 July and 24 August.

The year-to-date dip of ASI has reduced to 17.4% by Friday as opposed to 19.4%, reflecting a 10% change, whilst the MPI’s year-to-date dip, which was 17% on 19 July, had been erased to 11.3% by Friday.
President Rajapaksa met capital market stakeholders in his capacity as Minister of Finance, whilst the Treasury also used the opportunity as a pre-2013 Budget discussion.

Opposition Leader Ranil Wickremesinghe as well as market observers criticised the President for meeting capital market stakeholders, saying there were more important segments of the economy with bigger issues.

Some also viewed the meeting as an intervention by the President or the Government which would be perceived as negative, especially by foreign investors. In that context, as well some critics claiming that following the developments at SEC a few foreign funds would pull out, the sharp rise in foreign buying thus far has proved sceptics wrong; though whether this momentum will continue or not will be closely watched.

The Treasury as well as most of the capital market stakeholders welcomed the meeting. Some brokers noted that had there been a clear official communiqué following the meeting, investor sentiment would have strengthened further with a sharper rise in market activity as opposed to various parties including the SEC misinterpreting the discussions negatively.

The 20 July discussions with capital market stakeholders was the second in a year though after both engagements, the head of the capital market regulatory body SEC saw a change.

Among those who attended the forum were Deputy Finance Minister Geethanjana Gunawardena, MP Sajin Vas Gunawardena, Secretary to the President Lalith Weeratunga, Treasury Secretary Dr. P.B. Jayasundera, commissioners of the SEC, the Board of Directors of Colombo Stock Exchange, brokers and several investors.

Broking firm Asia Wealth Management said a stronger securities regulatory environment and a focus on attractively-priced fundamentally-sound counters were prerequisites for a sustained recovery to take place at the Colombo Bourse.

In its weekly report, Asia said despite the upward movement in the indices observed over the week on the back of number of large trades by institutional parties, macroeconomic worries and uncertainty over the securities regulatory environment continues to dampen local retail investor sentiment.

The data released by the Central Bank concerning the external and monetary position of the economy is an indicator of the likely future challenges. The external sector performance for June 2012 revealed that the trade deficit for 1HCY12 expanded 11.8% YoY albeit at a slower rate.

The most worrisome factor is the slowdown in agricultural and industrial exports due to a drop in prices of primary commodities in the case of the former and a slowdown in global consumption in the case of the latter. This has been mirrored in slowing revenue growth for 1QFY12of export-oriented counters such as Hayleys and Textured Jersey, which it believes is likely to continue.

Contemporaneously, rates on six-month and one-year treasury securities indicate that borrowing costs are facing upward pressure. This has already begun to negatively impact the earnings of highly leveraged counters and would lead to a downward revision of firm values.

Alongside the growth in Foreign Direct Investment (FDI) observed during 1HCY12, Asia Wealth Management said it expected renewed interest in equities at the Colombo Bourse by institutional players.
DNH Financial commenting on market trajectory said positive economics would provide a tailwind for the Colombo Bourse.

“It is easy to shy away from the market on the conviction that the market may not trend upwards given the relative lack of a sufficient impetus or support. While we don’t rule out the possibility of further sideways movement as investors sit in the wings, we are nevertheless sufficiently convinced that the backdrop for a firm rise in the market may be in place with positive economics providing the necessary tailwind,” the broking firm said. 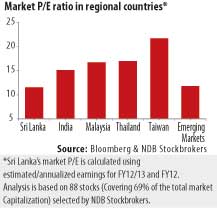 “The uncertainty that have been rattling global investors over the Eurozone debt crises is unlikely to dent the performance of the Sri Lanka Bourse as there appear to be a clear polarisation between the performance of the Sri Lanka equity market vis-à-vis global peers. Foreign fund managers are therefore advised to take advantage of the depreciation of Sri Lankan Rupee and exploit Sri Lankan equity opportunities using an active portfolio management approach in their stock selection process in order to generate alpha,” DNH said.

“We believe that the current market position could well be an important inflection point for the bourse and advise domestic investors to maintain positions in healthy blue-chip stocks that will generate consistent earnings growth and be able to successfully absorb the impact of both high interest rates and high energy costs,” DNH added.
http://www.ft.lk/2012/08/27/presidential-forum-boost-for-bourse-gathers-momentum/

@K.Haputantri wrote:? Are they really, really foreigners or the money kept in swis accounts that are coming in now. Any way, its good to see foreign money coming into the country at least to prove their point.

When I mentioned couple of months ago about these funds no one were seconding,now little by little readers and public coming to know the actual face of our beloved patriotic masked government members swiss account bla bla bla.
Wait and see time will prove these guys actual face, at that time everything may be its too late for the voters.