New SEC Chairman – A Pawn Of The “Stock Market Mafia” 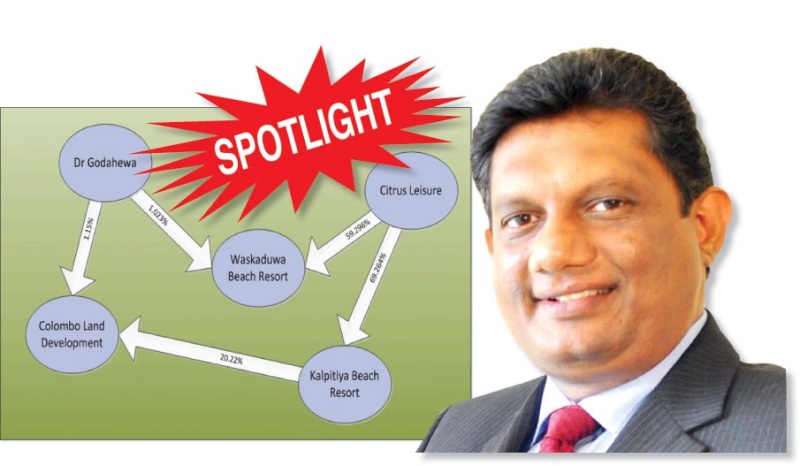 The appointment of Dr Nalaka Godahewa as Chairman of the Securities Exchange Commission far from putting the controversy surrounding pump and dump and market manipulation at the Colombo Stock Exchange at rest, has caused an uproar amongst seasoned investors. The uproar has been fuelled by Dr Godahewa’s links to Dilith Jayaweera who admitted to the media last week that he had received ‘five’ letters – and he was talking about events surrounding the Securities Exchange Commission (SEC).

Nalaka Godahewa’s links and investments in companies in which Dilith Jayaweera is also involved has seen him being appointed Chairman of George Stuarts Finance and Colombo Land & Development Plc.
Godahewa was also previously a Director at Seylan Bank. In the days leading to his SEC appointment Godahewa resigned his position at George Stuarts Finance.

In the Annual Report for 2011 of Colombo Land & Development Plc Godahewa is listed as the 7th largest shareholder holding 2,301,000 shares – valuing the shares at the end of 2011 at Rs 126.3 Million. The shares are listed as being on lien to Seylan Bank.

Our Previous Exposés On Nalaka Godahewa
The Quarterly Report for March 2012 shows Godahewa holding the same portion of shares but the value of the shares had crashed to Rs 39 from the 2011 close of Rs 54.90. A notional loss of Rs 36.5 Million however should only have made Seylan Bank become alert as a tranche of 2,301,000 shares are on lien to them. If Seylan Bank was exposed to 50% of the holding in 2011 and lent Rs 60 m to Godahewa by March 2012 the value of those shares had dipped by Rs 36.5 Million or more than half of the amount Seylan Bank lent Godahewa – one time Director of the bank. 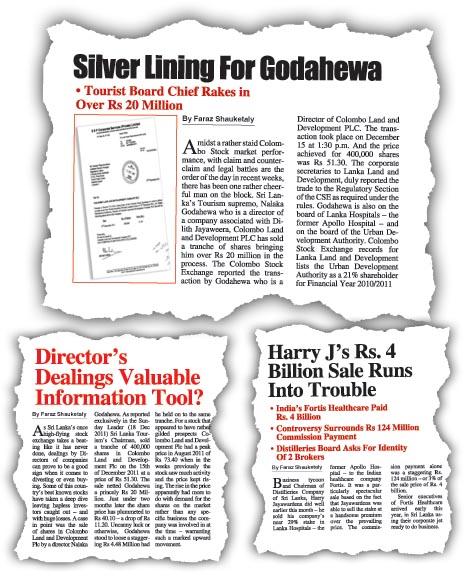 The Quarterly Report for June 2012 shows Godahewa still holding to his 2,301,000 shares but the share value had dropped below March 2012 levels. In June 2012 the share was trading at Rs 32.20 and Godahewa was staring at a notional (paper) loss of a staggering Rs 52.3 Million – perilously close to the Rs 60 Million he obtained from Seylan Bank. On the basis that Seylan Bank granted a loan of Rs 60 million when the shares were worth Rs 126.3 Million, (keeping in line with the norm of 50% although we cannot establish whether as a Director of Seylan Bank at the time Godahewa received preferential treatment).

In 2012 according to documentation publicly available from the Colombo Stock Exchange under statutory disclosure rules, Dr Godahewa is reported as having made several purchases of stock in Colombo Land: 9,100 shares at Rs 30.00; 35,300 shares at Rs 30.50. None of these shares are listed as having a lien to any bank. 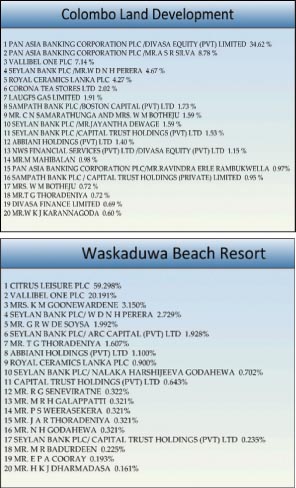 It has also been revealed that Godahewa is listed as the owner of 1,091,700 shares valued at Rs 10.7 Million in Waskaduwa Beach Resort Plc making him the 10th largest shareholder there. The entire shareholding is on lien to Seylan Bank and under normal circumstances the bank would have advanced Godahewa 50% of the value making the bank’s exposure Rs 5.2 Million. The interest Godahewa is likely to attract would work out at Rs 880,000 per year or Rs 74,000 per month. With the interest on the other loan for the Colombo Land & Development shares, Godahewa is servicing a loan of Rs 700,000 plus per month to Seylan Bank.

Additionally Godahewa has a tranche of 500,000 shares in Waskaduwa Beach, making him the 16th largest shareholder with that – occupying both 10th and 16th position. This tranche of shares is not on lien to Seylan Bank.

According to the Inland Revenue Department, whilst capital gains realised on investments on the Stock Exchange are not ordinarily subject to income tax, monies utilized to service loans will be deemed to be income and taxed accordingly. Further reports state that a group of Sri Lankan citizens are readying themselves to petition the Courts claiming that Dr Godahewa’s continuation as Chairman at the Sri Lanka Tourism Development Authority is unconstitutional and that his appointment at SEC displays a very high degree of ‘conflict of interest’.

The web of Godahewa’s link lays bare his claim that he is permitted to hold office at Sri Lanka Tourism because Colombo Land & Development does not operate a hotel and therefore is not in breach of the Tourism Act. A legal eagle told us that was a singularly one-sided view of the events, The Tourism Act specifically debars anyone who has a link in operating hotel services from holding office.

But Godahewa has demonstrated that he does have a link or indeed had such a link at some point whilst he continued to hold office at Sri Lanka Tourism.

As our diagram shows, Godahewa is intrinsically linked to Colombo Land & Development, Waskaduwa Beach Resort and Kalpitiya Beach. All of these are patently also linked to Dilith Jayaweera directly or through other companies in which Jayaweera has interests.

By his own admission to the media Jayaweera has admitted to being the recipient of letters from the SEC but has denied being part of any alleged ‘Mafia’ operation at the SEC in what is widely believed to be Mr Jayaweera alluding to allegations that he was part of the pumping and dumping and market manipulation at the Colombo Stock Exchange.

As part of the work that Nalaka Godahewa will have to oversee as Chairman of the SEC, would be the investigations that are already underway. The former Chairman of the SEC, Tilak Karunaratne told the President that he had sent out 226 letters to investors asking for more information. The prospect of Godahewa overseeing an investigation into his business partner or indeed a fellow shareholder in the form of Dilith Jayaweera has caused more serious questions to be raised as to the integrity, probity and transparency of any investigation being contemplated or already under way by the SEC. A number of telephone calls and e-mails addressed to Nalaka Godahewa went unanswered; the opportunity for Godahewa to respond to this article went unheeded.
(faraz@thesundayleader.lk)
Chairmen Of The Securities
Exchange Commission
2012 - Nalaka Godahewa (current)
2012 - Tilak Karunaratne
2011 - Mrs. Indrani Sugathadasa
2010 - Mrs. Indrani Sugathadasa
2009 - Udayasri Kariyawasam
2008 - Udayasri Kariyawasam
2007 - Dr. Gamini Wickramasinghe
2006 - Dr. Gamini Wickramasinghe
2005 - Dr. Dayanath C. Jayasuriya
2004 - Dr. Dayanath C. Jayasuriya
2003 - Lt. Gen. J.E. DENIS PERERA
VSV.D Litt (Honoris Causa) FCMI
2002 - Mr. M.L. Mack

thanks for sharing this

As a govt employee ( at SLIC, Tourist Board and now SEC) doesn't he have make a declaration of assets?

» Sri Lanka SEC completes probes, legal opinion sought: outgoing DG
» More and more new investors are falling prey to the false campaigns carried out by the mafia masterminds of the stock market.
» This is not the time for ordinary people to Invest In the Stock Market says Khalil Masood Chairman/CEO of the S K M Lanka Holdings (private) Limited.
» InvestOne of the greatest obstacles to successful trading is using money that you really can’t afford to lose. Stock market for beginners ments are subject to market risk, check the market rate before investing.. Stock market for beginners
» If stock market experts were so expert, they would be buying stock, not selling advice. Stock market for beginners