» Why is First Capital Holdings being dumped?
by Berryfund Today at 6:29 am

» AGST can move
by FINANCIAL CHRONICLE™ Yesterday at 11:58 pm

» AGST next Run with Profits...
by FINANCIAL CHRONICLE™ Yesterday at 11:56 pm

» AGST - Winner for this week
by FINANCIAL CHRONICLE™ Yesterday at 11:55 pm

» Twitter accounts related to the stock market
by Bakkabwoi Yesterday at 8:09 pm

» How Equity Emerged the Top Asset Class During a Pandemic
by samaritan Yesterday at 6:30 pm

» The Economy will be steered towards continued stability - CB Governor
by samaritan Yesterday at 10:04 am

Posts : 6053
Equity Stars : 15103
Reputation : 770
Join date : 2012-02-14
Selling pressure in secondary markets saw its yields increase for a fourth consecutive day as two-way quotes dried up in the market, according to Wealth Trust Securities. 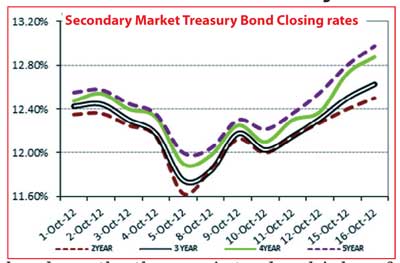 It said the overall yield curve continued its upward parallel shift as very thin volumes were seen changing hands on the three-year, five-year and six-year maturities as its yields hit intraday highs of 12.55%, 12.90% and 13.10% respectively.

This reflected increases of 30 basis points each on the three-year and six-year, while the five-year reflected an increase of 35 basis points in comparison to its last week’s closing levels.

Furthermore, selling pressure on secondary market treasury bills was evident as well with the 364-day bill being traded at 12.35%, reflecting a level of six basis points more than its weighted average of 12.29%.

Wealth Trust also said the Public Debt Department (PDD) of the Central Bank announced in total an amount of Rs. 16 billion for its weekly Treasury bill auction to be held today. Rs. 2 billion is being offered on the 91-day bill while Rs. 4 billon and Rs. 10 billion are being offered on the 182-day and 364-day bills respectively. At last week’s auction, weighted averages dipped across the board to levels of 10.63%, 11.77% and 12.29%.

In money markets, liquidity remained at a surplus of Rs. 1.1 billion yesterday with Rs. 4.91 billion deposited at Central Bank’s repo window at 7.75%. However, Central Bank’s discount window at 9.75% was accessed once again for a volume of Rs 3.75 billion as overnight call money and repo rate remained steady to averaged 10.52% and 9.65% respectively, Wealth Trust Securities said.