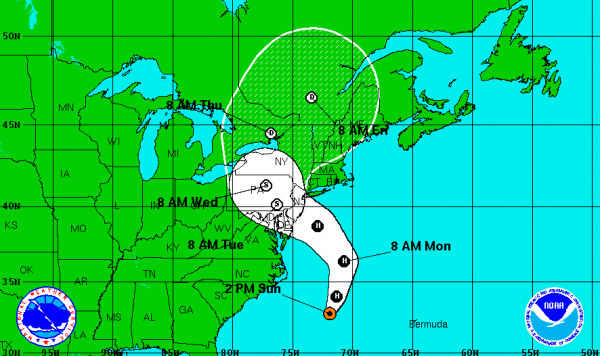 The center of the storm was positioned to come ashore Monday night in New Jersey, meaning the worst of the surge could be in the northern part of that state and in New York City and on Long Island. Higher tides brought by a full moon compounded the threat to the metropolitan area of about 20 million people.


NEW YORK — Forecasters warned that the New York City region could face the worst of Hurricane Sandy as it bore down on the East Coast's largest cities Monday, forcing the shutdown of financial markets and mass transit, sending coastal residents fleeing and threatening high winds, rain and a wall of water up to 11 feet (3.35 meters) tall. It could endanger up to 50 million people for days.

Sandy strengthened before dawn and stayed on a predicted path toward New York, Washington, Baltimore and Philadelphia— putting it on a collision course with two other weather systems that would create a superstorm with the potential for havoc over 800 miles (1,280 kilometers) from the East Coast to the Great Lakes. Up to 3 feet (0.9 meters) of snow were even forecast for mountainous parts of West Virginia.

Airports closed, and authorities warned that the time for evacuation was running out or already past. Many workers planned to stay home as subways, buses and trains shut down across the region under the threat of flooding that could inundate tracks and tunnels. Utilities anticipated widespread power failures.

The center of the storm was positioned to come ashore Monday night in New Jersey, meaning the worst of the surge could be in the northern part of that state and in New York City and on Long Island. Higher tides brought by a full moon compounded the threat to the metropolitan area of about 20 million people.

"This is the worst-case scenario," said Louis Uccellini, environmental prediction chief for the National Oceanic and Atmospheric Administration.

As rain from the leading edges began to fall over the Northeast on Sunday, hundreds of thousands of people from Maryland to Connecticut were ordered to leave low-lying coastal areas, including 375,000 in lower Manhattan and other parts of New York City, 50,000 in Delaware and 30,000 in Atlantic City, New Jersey, where the city's 12 casinos shut down for only the fourth time ever.

Obama cancelled a campaign appearance in Florida to stay in Washington and monitor the storm, with Election Day just a week away.

Authorities warned that New York could get hit with a surge of seawater that could swamp parts of lower Manhattan, flood subway tunnels and cripple the network of electrical and communications lines that are vital to the nation's financial center.

New York shut down all train, bus and subway service Sunday night. More than 5 million riders a day depend on the transit system.

"If you don't evacuate, you are not only endangering your life, you are also endangering the lives of the first responders who are going in to rescue you," Mayor Michael Bloomberg warned. "This is a serious and dangerous storm."

Sandy, a Category 1 hurricane with sustained winds of 85 mph (136 kph) early Monday, was blamed for 65 deaths in the Caribbean before it began traveling northward, parallel to the Eastern Seaboard. As of 5 a.m. Monday, it was centered about 385 miles (619 kilometers) south-southeast of New York City, moving to the north at 15 mph (24 kph), with hurricane-force winds extending an unusual 175 miles (281 kilometers) from its center.

Sandy was expected to hook inland Monday, colliding with a wintry storm moving in from the west and cold air streaming down from the Arctic, and then cut across into Pennsylvania and travel up through New York state.

About 90 miles (144 kilometers) off the coast of Cape Hatteras, North Carolina, 17 people abandoned a replica of the tall ship made famous in the film "Mutiny on the Bounty" after the vessel began taking on water, said Coast Guard Petty Officer 3rd Class David Weydert.

The Coast Guard was trying to determine whether to use cutters or helicopters to rescue the crew, who were in two lifeboats and were wearing survival suits and life jackets, he added.

Despite the dire warnings, some refused to budge.

Jonas Clark of Manchester Township, New Jersey — right in Sandy's projected path — stood outside a convenience store, calmly sipping a coffee and wondering why people were working themselves "into a tizzy."

"I've seen a lot of major storms in my time, and there's nothing you can do but take reasonable precautions and ride out things the best you can," said Clark, 73.

Posts : 100
Equity Stars : 4427
Reputation : 0
Join date : 2012-02-20
3 feet water on the floor of the New York Stock Exchange. They dont know when it will open this week. Our Thoughts and Prayers are with all our Forum freinds and family on the East Coast ! Stay safe.

The following info is from the internet :-

Like a church on Sunday, you don't expect the world's most famous exchange to close when there are stocks to be traded. However, the New York Stock Exchange has shut its doors multiple times in its long and storied history. We'll look at when and why the NYSE in this article. (For related reading, also see The Birth Of Stock Exchanges.)

Fire and Ice
When the NYSE was still known as the New York Stock & Exchange Board, the NYS&EB, it started out at 40 Wall Street. From 1817 to 1835, things went smoothly. As a testament to the brokers and members' reluctance to stop business, the Great Fire of 1835 that ripped through lower Manhattan did not actually result in a closure, but rather a move to temporary quarters where trading continued on. (What is the NYSE? Find out in The NYSE And Nasdaq: How They Work.)

Since then, the NYSE has been prey to some inevitable shutdowns due to weather. The blizzard of 1888 caused a shut down, as did the moves to larger quarters. Excessive heat, lack of heat and paperwork backlogs - particularly during times of short staffing during wars - also caused the exchange to pause for a day here and there. So perhaps the fairest way to judge is by the events that led to successive days of closure.

Deaths
The first long closure of the NYSE followed the assassination of President Abraham Lincoln by John Wilkes Booth in 1865. The exchange closed for over a week and has observed Lincoln's birthday every year from 1896 to 1953. Since then, the NYSE has closed for days of mourning following the deaths of notable figures, occasionally making their birthdays a holiday at the exchange. More often, the exchange will close early or for several hours during the funeral of important figures. (Important people also get to ring the bell. Learn more in The Tradition Of The NYSE Bell.)

Panics and Crashes
The first financial event to close down the NYSE was the failure of Jay Cooke & Company during the panic of 1873. Jay Cooke & Company was a major player in the U.S. banking system, but it was overleveraged in railroad speculations. The bank failed, and the NYSE closed for ten days. Businesses and railroads failed en masse and the economy spiraled into a six-year depression.

War
The declaration of WWI marks the longest shutdown on record with the NYSE closing for more than four months in 1914. The exchange eventually did get back to business and its operations helped cement the United States' position as the preeminent financial hub after the war.

WWII caused no such shut down. However, the NYSE appropriately shut down for two days to celebrate the victorious return of the troops in 1945 with - what else - a ticker tape parade.

The other long closure related to war, was the September 11th terrorist attacks on the WTC. The four-day closure marked the longest since the banking holiday in 1933. (For more info on the start of this exchange, check out Wall Street History: The NYSE Is Born, Bubbles Form.)

Notable Non-Closures
Although many events have shut the NYSE down for a day, and a rarer few have closed it for several days, the days where the NYSE has carried on in the face of adversity are also worth mentioning. During some of the worst market moments, including crashes and panics in 1907, 1929, 1987, 2000, 2007 and 2010, trading has continued.

But a favorite example of Wall Street's admirable stubbornness is the bombing of Wall Street in 1920. When a wagon loaded with dynamite and shrapnel killed 38 people outside the J.P. Morgan bank, not only did the NYSE open, but the bank itself opened for business as well. It marked one of the first times in modern history when public opinion swung firmly behind Wall Street, supporting their defiance of terrorism.

The Bottom Line
Brokers are not invincible. If the heat is out or the roads snowed over, the NYSE will shut down. To keep it closed, however, requires war, terrorism, depression, panic or assassinations, and fortunately those events are still much rarer than the odd blizzard.