» When will supply chain disruptions ease?
by Gowri123 Yesterday at 11:46 pm

» The war in Ukraine is no longer shocking the wheat market
by ResearchMan Yesterday at 12:53 pm

The Tranquil Trader is a person that truly loves to trade. This love of trading is very different from the view that mass media would have you believe. Forget the trader that is personified by Gordon Gecko in the film Wall Street. The Tranquil Trader loves trading because it provides him with a flawless feedback mechanism – a true reflection of his inner state.

When his inner state is tranquil he trades with ease and is able to flow with the markets. In this state of flow he has no attachment to profit or loss, he doesn’t pursue winning trades and has no fear of future losses. Never, not even for a second, does he dwell on past mistakes and successes; The Tranquil Trader is always fully here in the NOW.

When he first started trading he was constantly in pursuit of things – profits, the ideal trading strategy, the perfect trade. He tried to anticipate where the markets would go next and was constantly looking to hit the ball out of the park. As a result his trades were too big and he traded too often.

After what felt like a lifetime on this roller coaster, this beginner trader began to learn some risk management skills. This helped him cure his addiction to over-trading and forced him to use much smaller position sizes. He slowly raised his foot onto the next rung of the trading ladder; where the novice traders hang out.

As his journey progressed our trader began to hear about the fascinating world of trading psychology. He learned all about our conditioned flight or fight response, determined by the reptilian brain. He discovered some of the prime sources of trading anxiety – fear of failure, fear of success, fear of inadequacy etc.

The more he read, the more he became aware of his own subconscious conditioned responses. He noticed his heartbeat rising, he recognised that sweating was a big part of his trading day and he experienced big mood swings. Previously he had been blind to these responses but the more he came to understand the psychology of trading the more aware he became of his own behaviours. Eventually he reached the point where he became an observer of himself; a competent trader.

As he observed these physical, mental and emotional reactions to his trading mistakes he began to use these signals as a guide to putting tools in place to improve his performance. He began to accept that he was not trading alone – his trading seat was really a sofa which he shared with his conditioning, his beliefs, his cultural DNA and many other invisible contributors. It was like being surrounded by back seat drivers and he could never be truly sure who was in control. He started to search for trader performance tools to reduce these other influences.

Let’s be clear here, we are talking about trader performance not trading results. As he became closer to becoming an expert trader our trader stopped trying to make more money and made his prime focus greater self-control and self-mastery. This stage was all about self-motivation – drinking water, eating live foods, getting regular exercise, enjoying the sun, spending time in nature, getting loads good quality sleep, taking regular breaks, strictly limiting his trading hours. He started to attend to his lifestyle. He finally began to reach a clear understanding that trading is a high-performance profession.

By now he had started to become a trading machine. He had, over time, moved from being an amateur jogger thinking that he could win the New York Marathon, to somebody who really takes it (too) seriously. He had transformed himself from a wannabe trader to a high-performance trader but there was no joy in his life, trading had become an obsession.

The definition of obsession in this context is heavily left brain – a highly analytical, logical, rational and intellectual understanding of how to trade. He had a strong understanding of how to beat the market but he was still pursuing, single mindedly, trading profits. If he had a right-brain inspirational thought his rational left-brain bias quickly dismissed it. The left-brain had become the little dictator and held him prisoner to its perspective. He was missing half the story; he was missing half his brain!

Our expert trader began to question his pathway. “Why am I doing this?” “Is my life a computer screen (or three)?”

Around the same time his understanding of himself moved from a simple awareness of trading psychology to the blossoming of his intuition; his dormant right brain. He was more in touch with himself as a result of all the trader performance work he had done and he started to become more conscious of his gut feelings. He said to himself, “Wait a minute! That’s the third time this week I’ve had that same gut feeling and not followed it”.

Then he entered a brave new world. Initially he started to record what this small voice was telling him. Next he began to place experimental trades based on the wisdom of the small voice. Then he placed some real trades and received positive feedback. Gradually, rather than being purely a left-brain strategist, he become an holistic trader; a master trader.

His right brain moved into equal balance with his left – he became whole. Yet more questions started to arise; “Who is this small voice anyway?” And so commenced the inspirational understanding of who he really was.

He finally recognised that the key to maintaining this way of life, this dialogue, was what he referred to as Powerful Inner Tranquility – and so was born The Tranquil Trader.


This is an article sent by one of my trading buddies from US. I thought of sharing this with you..gann 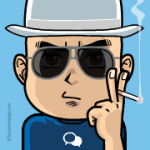 Thanks a lot for sharing this article!
And please give my regards to your US friend!

Never knew about a stage above Mastery