Posts : 6053
Equity Stars : 15141
Reputation : 770
Join date : 2012-02-14
Adding a fresh feather to Sri Lanka’s cap of improving the climate and Ease of Doing Business, the country has moved up in the prestigious Forbes magazine’s list of Best Countries for business.

In the latest list, Sri Lanka is ranked 79, four notches up from 83rd position previous year. 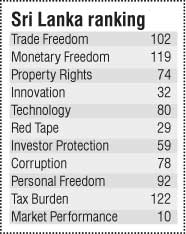 New Zealand ranks first on our list of the Best Countries for Business, up from No. 2 last year, thanks to a transparent and stable business climate that encourages entrepreneurship.

Denmark emerged second, followed by Hong Kong and Singapore placed at number 4. Last year’s number one Canada had slipped to fifth position this year losing ground on innovation and technology.

The US placed second in 2009, but it has been in a steady decline since.
Sri Lanka…

In Forbes commentary on Sri Lanka, it said Sri Lanka is engaging in large-scale reconstruction and development projects following the end of the 26-year conflict with the LTTE, including increasing electricity access and rebuilding its road and rail network.

High levels of Government funding may be difficult, as the Government already is faced with high debt interest payments, a bloated civil service, and historically high budget deficits. The 2008-’09 global financial crisis and recession exposed Sri Lanka’s economic vulnerabilities and nearly caused a balance of payments crisis, which was alleviated by a $ 2.6 billion IMF standby agreement in July 2009.

The end of the civil war and the IMF loan, however, have largely restored investors’ confidence, reflected in part by the Sri Lankan stock market’s recognition as one of the best performing markets in the world.

Sri Lankan growth rates averaged nearly 5% in during the war, but increased Government spending on development and fighting the LTTE in the final years spurred GDP growth to around 6-7% per year in 2006-08. After experiencing 3.5% growth in 2009, Sri Lanka’s economy is poised to achieve high growth rates in the post-war period.
http://www.ft.lk/2012/11/16/sri-lanka-moves-up-in-forbes-list-of-best-countries-for-biz-kiwis-top/