» Day Traders must gradually start accumulating a well diversified portfolio of stocks which are cash generative. Stock market for beginners
by Asoka Samarakone Today at 8:24 pm

» GLAS will be winner with Super Gain.
by Promoney Today at 7:36 pm 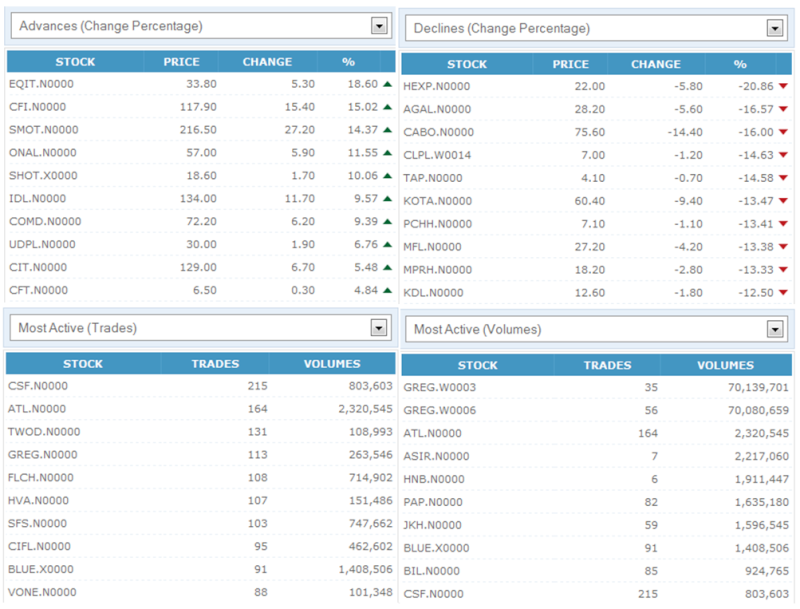 Nov 21, 2012 (LBT) - The nosedive in the bourse extended for a second day as portfolios start to get affected by margin calls. Selling pressure gained momentum during the first half of the day as the index bottomed out at 5,357.6 while a slight recovery followed allowing the index to close at 5,377.9 points. With the benchmark index losing 73.4 points, the more liquid Milanka followed a similar pattern losing 79.6 points and S&P SL20 Index losing 33.3 points. The blue chips led by Aitken Spence (-5.6%), Ceylon Tobacco (-1.9%), John Keells Holdings (-1.8%) and Distilleries (-3.3%) were the primary contributors to the decline of the index. A sharp increase in turnover was caused by 11 crossings that took place during the day which contributed 83% for the total turnover.

The lack of the buying interest continued to haunt the market, while the sudden buildup of some selling pressure resulted in a deep downward swing. The high proportion of large deals suggest that the institutional and foreign play still exists in the market dominating turnover and activity picking up counters with strong valuations. We continue to suggest our investors to note the trend of these large investors and accumulate the value counter which trade at deep bargains.

The premier conglomerate John Keells Holdings was the leader in market turnover amidst 3 crossings under its belt accounting for 1.5mn shares dealt at the LKR215.0. The on-board transactions of the counter were negligible as the counter closed the day at LKR210.1 (-1.8%). Both Warrants [W:0003 & W:0006] of Environmental Resources Investment recorded crossings of 70mn shares each at prices LKR4.2 and LKR4.5 respectively. Hatton National Bank, following the crossing on Monday, recorded 3 more off market deals today accounting for 1.9mn shares at LKR145.0. More crossings were registered by Chevron Lubricants and Asiri Hospital Holdings. The former saw 295k shares crossed in 2 deals at LKR198.0 and the latter saw a 2.2mn shares dealt at LKR11.4.

Oil Pares Advance as Greek Talks Falter; U.S. Stockpiles Drop: Oil swung between gains and losses in New York after European finance ministers failed to agree on a debt-reduction package for Greece. Prices rose earlier after a report showed crude stockpiles shrank in the U.S. Crude for January delivery was at USD86.99 a barrel, up 24 cents, in electronic trading on the New York Mercantile Exchange at 4 p.m. Singapore time.
http://lbt.lk/stock-market/movement/2992-lbtmarket-wednesday