The positives of large scale foreign buying seemed to have rubbed off against local institutions as the latter stepped up buying throughout this week. Retail activity remained subdued though as interest rates still remain at high levels.Market opened on Monday on a positive note but on very low activity. Thereafter, turnover was dominated by private deals which contributed almost 62%. Indices closed in negative territory as losses on many blue-chips didn’t help the cause. Retail participation was subdued ahead of the seasonal spending period. ASI dropped 19.21 points (0.35%), MPI lost 33.30 points (0.66%) and the S&P SL20 index gained 2.07 points (0.07%). Turnover for today was Rs. 532.9Mn.

On Tuesday a major deal on Asiri Central and few blue-chips helped to bolster activity after a relatively slow start. Indices managed to close in positive ground helped by gains on blue-chips such as Commercial Bank. It is worthwhile noting that John Keells Holdings is trading approximately at around the same price levels as it did during the peak of the All Share Price Index in February 2011. Conversely, the ASI has lost approximately 2,300 points to date since the peak. ASI gained 4.28 points (0.08%), MPI gained 27.40 points (0.55%) and the S&P SL20 index gained 10.18 points (0.34%).Turnover was Rs. 2,587.6Mn.
Market traded with mixed sentiments throughout Wednesday with few blue-chips losing ground. Commercial Bank continued to provide activity in the market whilst turnover was dominated by blue-chips. Gains on Bukit Darah helped to prop up the indices as a private deal took place above the market price. Yields on treasury bills dropped across all maturities in today’s auction helping revive the equity market. ASI gained 4.87 points (+0.09%), MPI lost 18.44 points (-0.37%) and the S&P SL20 Index lost 1.63 points (-0.05%). Turnover was Rs. 464mn.

Market seemed to have build-up some momentum on Thursday as foreign and local institutions were seen collecting parcels and retail quantities at these low levels of several blue-chips. Blue-chips received the lion’s share of the activity as retail participation remains on the sidelines. Plantation companies attracted renewed investor interest as tea prices fetched record prices in the most recent auction. ASI gained 14.70 points (0.27%), MPI gained 9.76 points (0.19%) and the S&P SL20 index gained 12.87 points (0.43%). Turnover was Rs. 811.9Mn. 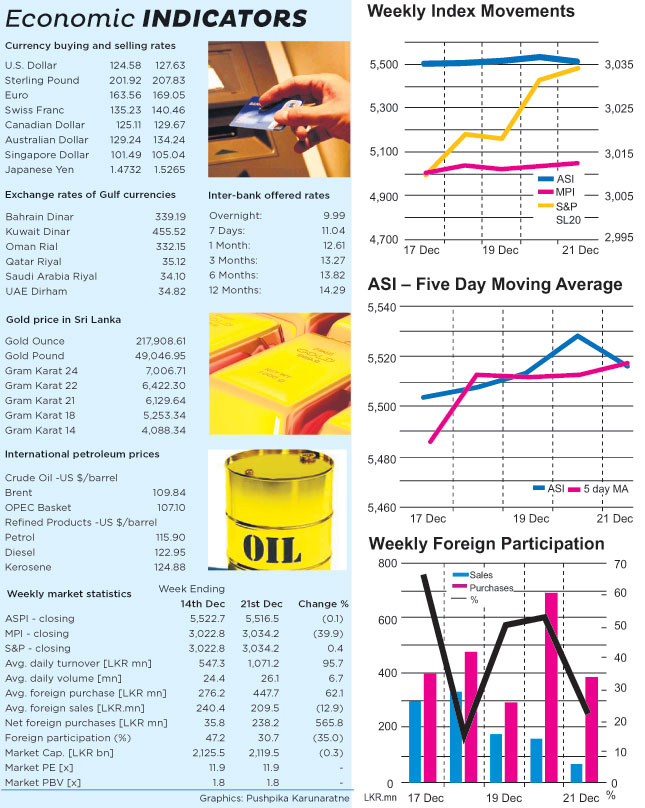 Large block trades on the Colombo bourse last week propelled turnover to a one-month high with a leading stock broking firm noting that the previous week’s up-tick had continued although at a much lower pace with the main index rising a cumulative 13 points largely due to these trades and continued net foreign inflows into blue chips.

This was stated by Acuity Stockbrokers in their Weekly Market Report which said that the main All Share Price Index had declined marginally over the week losing 6.23 points (0.11%) and the Milanka falling suit declining marginally 0.62 points (0.01%). However, the S&P SL20 Index adding contrast gained a cumulative 11.45 points (0.38%) week-on-week.

Commercial Bank was among the top contributors to the week’s turnover with trades worth Rs.570.65 million (10.65%) of the week’s total.

Turnover last week at Rs.5.36 billion was nearly double (95.71%) the previous week’s with the daily turnover average also rising to Rs.1.07 billion from Rs.547.35 million a week earlier. But market capitalization declined marginally by 0.05% closing the week at Rs.2,119.47 billion.

Acuity noted that despite a 0.44% appreciation of the rupee last week, foreign inflows continued unabated with the year to date inflow with the CSE rising over 300% year-on-year. But the brokerage expected markets to remain subdued in the holiday-shortened Christmas week.

John Keells Stockbrokers said that the market stayed largely flat after the previous week’s rebound although large caps ended higher with block trades accounting for most of the volumes with activity on JKH and Asiri accounting for the largest share.

The Acuity report noted that GDP for the third quarter of this year was the lowest recorded since 2009 with year-on-year growth at 4.8% against 6.4% in the second quarter and 7.9% in the first quarter of 2012.

The Central Bank had consequently lowered its 2012 GDP growth forecast to 6.5% from the previous 6.8%.