» Lanka Walltile PLC Investment Case
by judecroos Yesterday at 8:55 am

Co-Admin
Posts : 6822
Equity Stars : 21916
Reputation : 2855
Join date : 2011-02-01
Location : London
Asia Wealth Management has come out with an initial assessment of the performance of the Colombo stock market and some of the key influential factors. Here are excerpts.

The deepening of the downturn in economic activity experienced in most developed markets in the aftermath of the global financial crisis continued to dominate the performance of global financial markets during the year.

In the early days of the crisis, investments in the equity markets of emerging and frontier markets seemed attractive due to the low correlations exhibited by the stock returns of these stock markets. However by 2012, the impact of the crisis had begun to affect the real economies of most developing markets through their trade linkages with the developed market.

This filtered in to the financial markets resulting in a revision of correlations as markets begun to move in-sync.

The CSE despite being ranked by Bloomberg as “the best performing stock market in 2010” was not immune to these forces which resulted in a negative 9% YTD return in the All Share price Index (ASI) by December 2012.

The market was also going through a phase of correction as a result of the index rising to untenable levels in the immediate post war period. Further the high interest rates environment which prevailed in the economy towards the latter half of the year induced a greater proportion of retail investors to choose more stable fixed income investments such as time deposits and corporate debentures over risky equity investments. This resulted in the YTD P/E growth was a negative 13% although market earnings grew by 4% over the same period.

We now go on to review some of the key economic and market news which impacted the performance of the CSE over the year 2012.

January
Market watchers began the year on an optimistic note and were hopeful of a turnaround in the market’s prospects with the SEC’s decision to relax credit rules to the delight of most brokering houses. Despite the estimated Rs. 5 b boost to market liquidity resulting from this decision, the Colombo bourse displayed lacklustre activity throughout the month.

The critical comments made by Standard Chartered Bank with respect to the Central Bank’s ‘Roadmap 2012’ as being overly optimistic foreshadowed the macroeconomic weaknesses that were to be witnessed over the coming months.

February
The Central Bank’s decision to shift from a fixed exchange rate regime to a managed exchange rate represented a paradigm shift in the Sri Lankan economy. The decision which resulted in a sharp depreciation of the rupee was mirrored in the ASI index movement which fell sharply to approach the 5,000 level.

Contemporaneously the Central Bank took decisive measures with the twin objectives of lowering private credit growth and inflation in order to prevent the economy from overheating. This was done by raising the repo and reverse repo rates to 7.5% and 9% respectively.

The CBSL also capped credit growth at 18% based on the banks’ outstanding loan book at the end of 2011.

This had implications for borrowing costs which begun to trend upwards which severely affected the earnings performance of listed firms towards the latter half of the year.

March
The dull sentiment permeating amongst equity investors did not however dampen the interest witnessed in Access Engineering; which debuted on the CSE on 27 March. The credible performance of the stock in the opening week of the IPO propelled the counter to become the most valuable stock in the Construction and Engineering sector. The significant foreign interest recorded in diversified counters over the month totalling approx. Rs. 17.9 b, helped arrest the slide in the ASI. 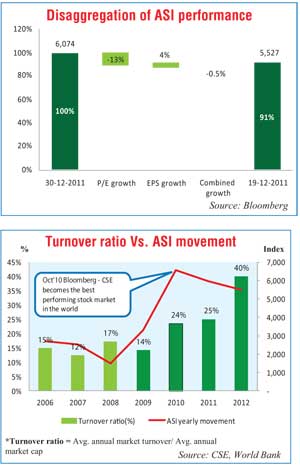 April
The confidence in the future economic outlook by both the IMF and the ADB which expected a GDP growth of 7.5% and 7% for 2012 respectively resulted in a slight upturn in the index. On the other hand, in the external side of the economy, the trade balance rose exponentially in 1Q2012 as the economy felt the effects of the J-curve phenomenon which causes in the short term a worsening of the terms of trade in the event of a significant depreciation.

Also in response to this, the Central Bank decided to tighten monetary policy even further by raising both the repo and reverse repo rates by 25bps. However, both the IMF and the Central Bank remained confident that growth rates would be sustained despite short term weaknesses which lent confidence to equity investors.

May
The second week of May marked the earnings season for the CSE with majority of companies reporting FY12 full year results. The noticeable slowdown in YoY earnings growth for many sectors dampened investor expectations. During the month, Fitch ratings reaffirmed its BB- rating with a stable outlook for Sri Lanka’s sovereign debt.

Further, a significant negative market event was revealed to the market on 9 May, which saw the suspension of NSB’s custodial role by CSE over its failure to honour the purchase of its 13% stake in The Finance Company (TFC). The much-publicised incident led to the Securities & Exchange commission (SEC) introducing more stringent trading measures for market insiders. The overall impact was a drop in YTD performance of the ASI to negative 20% by the end of the month.

June
The market continued its slide in the month of June as the high interest rate environment brought about by the Central Bank’s decision to keep policy rates at an elevated level in order to limit excessive credit growth, resulted in returns offered by stable fixed income instruments such as time deposits and debentures seem more attractive to retail investors over uncertain more risky equity investments. The index fell to its lowest level of 4737.75 with an YTD loss of 22% on 6 June over growing concerns over governance related matters, which prompted the SEC to boost its investigative capacity.

Turning to the external side, the policies undertaken by the Central Bank to limit private sector credit growth coupled with the depreciation of the rupee resulted in a slowdown in the growth of imports which could have contributed towards the slight upturn in the market witnessed towards the end of the month. 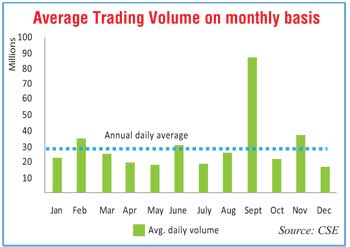 July
Despite the outbreak of several positive news; such as relaxation of broker credit period, 10.5 times oversubscription of the US$ 1 b sovereign bond and the receipt of the final tranche of the US$ 2.5 b Stand-By Agreement (SBA), the Bourse didn’t witness a major turnaround in local investor participation. However the foreign participation for the month of July increased mainly on account of the IMF’s positive outlook on the country and the release of the final tranche of US$ 2.5 b SBA, which resulted in a net foreign inflow of Rs. 2.5 b compared to the net foreign inflow of Rs. 6.2 m recorded in June.

The gross official reserves of the country also improved significantly to reach US$ 7.1 b in July, the highest figure for the 12 months. On a separate note, the drought conditions witnessed during the 2Q2012 took a toll on the prices of consumer goods in July. Colombo Consumer price index accelerated to a 15-month high of 9.8 per cent in July as the dry weather damaged most food crops.

August
The month of August was highlighted with significant structural changes in SEC. With the resignation of the SEC Chairman Thilak Karunaratne, the Bourse was covered in a veil of speculation as to the identity of the next chairman. A heightened activity in both turnover levels and volumes were witnessed during the last two weeks of August as the market rumoured that Dr. Nalaka Godahewa would be appointed as the new SEC chairman, whilst the official announcement was made towards the end of the month.

The month also highlighted the release of earnings for the June quarter where a YoY dip in most companies was witnessed mainly owing to the negative economic conditions such as increasing interest rates, depreciation of the rupee and mounting energy prices. However, expectations over a positive structural change in SEC resulted in YTD improving from – 18.8% in end of July to -14.4% in end of August. 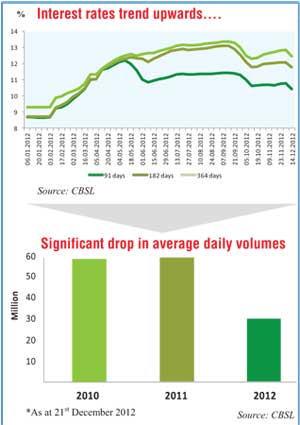 September
Repeating history, the Bourse witnessed an extra boost in activity during the month of September recording the highest revenue and turnover for the year. The rally witnessed in September reduced the YTD negative return to -1.7% while the ASI surpassed 5,900 levels. However the economy witnessed a further tightening on its 2012 full year growth targets with Central Bank releasing the 2Q2012 economic results.

Economic growth eased to 6.4% YoY during the second quarter of the year mainly on account of the tightened monetary policies and drought conditions. Subsequently, the Central Bank revised its economic growth projections to 6.8% from 7.2%.

October
The month of October was predominantly driven by profit booking where speedy gains witnessed in most counters during September faded away dragging down both indices. October was marked by SEC’s decision to relax several regulations such as loosening the broker credit margins, lifting 20% upper price limit on off market deals and lifting the ban on directors and employees of broking firm selling shares within six months from their purchase.

During the month, the Government decided to increase the excise duty on liquor, while the price ceiling on cement and poultry was also increased creating pressure on consumer price levels. Subsequent to the Central Bank’s 2012 economic growth revision in September, IMF also made a downward revision to the projected economic growth from 7.5% to 6.7%.

November
Positive sentiments were witnessed across the board during the initial two weeks, which was marked by Government’s Budget proposals for 2013. Bourse reacted positively to the budget which gave several concessions for the development of the capital markets.

The month of November also marked the 3QCY2012 earnings announcements for listed corporates. A robust earnings growth was witnessed in sectors such as Banking, Finance and Insurance, Hotel and Leisure and Plantations. However the overall earnings for the quarter witnessed a YoY dip of 4%. The overall impact was a drop in YTD performance of the ASI to negative 11.9% by the end of the month.

December
December was marked by a number of critical economic announcements. The Central Bank decided to ease the monetary policy by reducing both repurchase and reverse repurchase rates by 25 basis points while the credit ceiling imposed on banks was also removed with effect from next year. A major turnaround in both ASI and MPI was witnessed subsequent to the announcement.

The Central Bank also released the 3Q2012 economic indicators during the month which demonstrated the lowest growth of 4.8% for the quarter since the end of the war, mainly owing to internal and external shocks. Subsequently Central bank also revised the country’s 2012 growth targets to 6.5% from an earlier 6.8%.
http://www.ft.lk/2013/01/02/2012-and-events-impacting-the-colombo-stock-market/

Re: 2012 and events impacting the Colombo stock market