» Talks to get FedEx, Expo Freight hubs at BIA
by samaritan Today at 1:05 pm 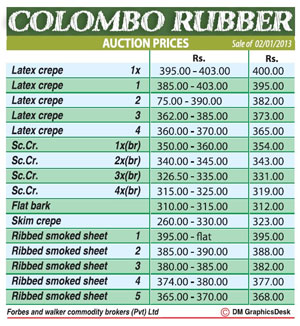 “The prices are purely being driven by improvements in Japan and regional markets and we have seen prices rapidly improve over the whole of last week. The last quarter of 2012 was still fairly challenging but overall, the first quarter of this year looks to be positive so far,” Director at Forbes and Walker Commodity Brokers, Damitha Perera said.

Rubber exports generated Rs.1.1 billion during the month of October last year, down 38.2 percent year-on-year. Exports from January to October amounted to Rs.13.7 billion in 2012, against Rs.20.3 billion during the same period in 2011.

In terms of production, Sri Lanka recorded 128.6 million kilograms of rubber production between January and October last year, whereas in 2011, the country produced 132.4 million kilograms during the same period. Improvements in prices at local auctions corresponded with a price rally in international markets as China, the world’s largest consumer of rubber, likely looking to restock before its week-long New Year in early February.
On the production side, main producing countries like Thailand, Indonesia, Malaysia and Sri Lanka are expected to see supply levels fall as they enter the annual dry season, resulting in less production.
http://www.dailymirror.lk/business/economy/24717-rubber-prices-edge-up-in-new-years-first-auction-.html