Noting that the market had built on the upward trend seen in the last week of 2012, the report said that the All Share Price Index had crossed 5,700 points for the first time in 12 weeks to record a week-on-week gain of 140.58 points.

Turnover levels too improved significantly over the 4-day trading week with large block trades in Commercial Bank and JKH helping to sustain volumes.

"Similar sentiment was likely to prevail in the week ahead," Acuity said.

The bank estimated annual average inflation for 2012 at 7.4% with expectations of sustained declines in inflation coupled with continued fiscal consolidation which would imply lower rates.

It indicated that it would continue to systematically allocate EPF funds to the stock market, private equities and corporate debts.

The bank also highlighted its commitment to encourage equity and corporate debt markets to provide non-inflationary sources of funding to the economy.

The bank had nevertheless indicated that intervention was possible in the event of sharp fluctuations.

Total turnover for the four-day trading week was Rs.3.72 billion against Rs.1.27 billion to the previous three-day week.’

John Keells Stockbrokers said in its Stock Market Weekly that the All Share Price Index trended higher during the first week of 2013 mainly on the back of gains on large caps with Commercial Bank, JKH and HNB accounting for 69% of the weekly turnover largely driven by crossings.

Foreign participation improved during the week resulting in a net inflow of Rs.401.8 million.
http://www.island.lk/index.php?page_cat=article-details&page=article-details&code_title=69720

The drop in police rates helped to boost interest on equities whilst foreign continued to pick up shares of blue-chips. Banking & Financial and John Keells were the top picks for foreigners whilst high dividend yielding counters saw their prices soar. Retail activity picked up this week in anticipation of a positive turnaround.

The positive momentum can be expected to pick up further as the “herd effect” would gather momentum.
Market traded on a mixed note on Monday with Nestle and Ceylon Tobacco Company touching all-time highs. Activity was dominated by blue-chip counters although retail push was seen on selected penny stocks. The year to date drop in the All Share Price Index is approximately 7.1% which is relatively better than the previous year’s drop. ASI gained 35.87 points (+0.6%) to close at 5,643.00, MPI lost 1.08 points (+0.02%) to close at 5,119.09 and the S&P SL20 index gained 16.34 points (+0.5%) to close at 3,085.33.

The New Year started on a strong note as a further reduction in yields of treasury bills helped to create excitement. Retail activity picked up on Wednesday which helped to boost sentiment to some extent whilst institutional interest on Commercial Bank bolstered turnover. Commercial Bank contributed 85.3% of total market turnover. Indices closed higher helped by a late surge in retail participation as the All Share Price
Index was in negative territory in early trading. Whilst a positive trend could be expected, we encourage investors to base their buying decisions on the fundamentals and prospects of the company. ASI gained 40.79 points (0.72%) to close at 5,683.79, S&P SL20 index gained 5.55 points (0.18%) to close at 3,090.88.

Positive momentum was seen on Thursday with retailers increasing their presence. Gains on Ceylon Tobacco Company helped to bolster the indices whilst Hatton National Bank and John Keells Holdings contributed well to turnover. People’s Leasing & Finance attracted retail interest as a merger with its subsidiary is round the corner. ASI gained 46.66 points (0.82%) to close at 5,730.45 and the S&P SL20 index gained 13.37 points (0.43%) to close at 3,104.25. Turnover was Rs. 518.6m.

Retail activity picked up towards the latter part of trading on Friday with Hatton National Bank, John Keells Holdings and Asiri Surgical providing substantially to turnover. Indices were almost flat in early trading but picked up as momentum gathered with retail interest seen on counters such as Pan Asian Power, Free Lanka Capital Holdings and People’s Leasing & Finance. There seems to be an overall improvement in sentiment in the market as conditions have relatively changed for the best. Blue-chips such as Ceylon Tobacco Company, Chevron Lubricants and Lion Brewery achieved their 52 week highs today which indicate that foreign buying is very enthusiastic.

Cash map for today was 61.71% which is a marked improvement from yesterday. Foreign participation was 52% of total market turnover whilst net foreign inflow was Rs. 418m. 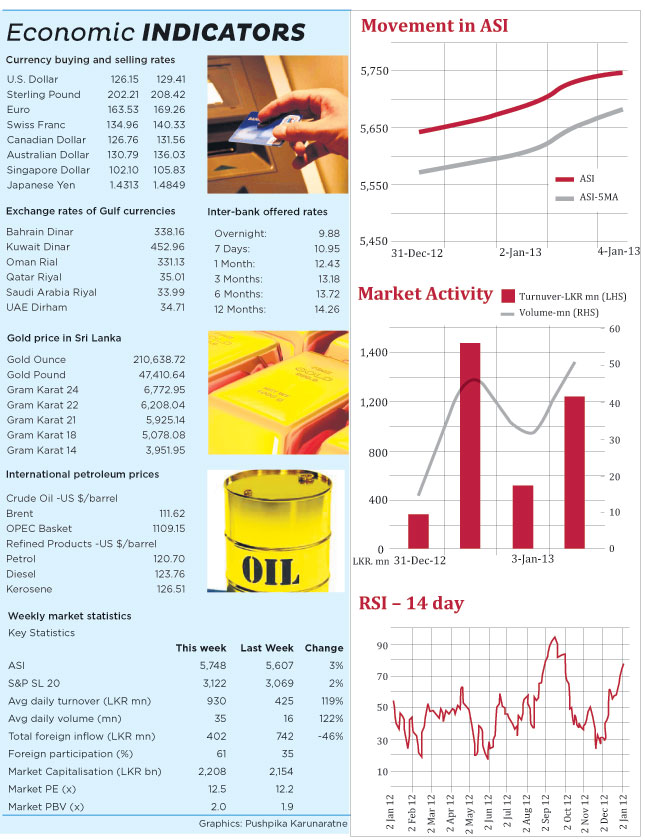 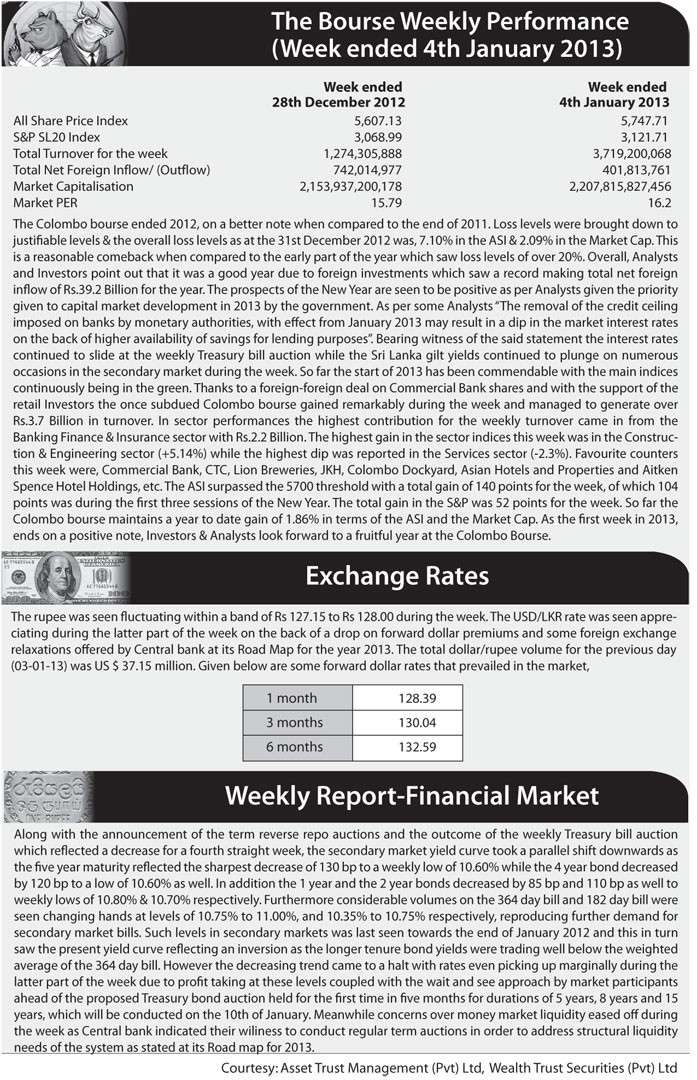 Trading for 2012 ended in a positive note on Monday with the ASPI closing higher by 36 points at 5,643 despite the Milanka losing a point to close at 5,119. However low activity levels were witnessed recording a turnover of Rs 289 mn. Interest in blue-chip counters persisted with foreigners eyeing attractive counters. The top contributor to market turnover for the day was Nestle followed by Sampath Bank, JKH and Textured Jersey. The share price of Nestle gained Rs 50.00 to close at Rs 1,550.00 while Sampath closed Rs 1.00 lower at Rs 200.00. Textured Jersey gained cents -/10 to close at Rs 9.00. A net foreign inflow of Rs 106 mn was recorded for the day; cumulating into a total net foreign inflow of Rs 39.2 bn for the year 2012. Furthermore the Milanka Price Index will be discontinued from the 31st and will be replaced by the S&P SL20.

The market opened for 2013 on Wednesday, following a special CSE holiday on the 1st. The ASPI ended higher by 41 points at 5,684 and the S&P SL20 up by 6 points at 3,091. Improved activity levels were recorded with turnover crossing Rs 1.6 bn on the back of a foreign to foreign share transfer in Commercial Bank which accounted for circa 80% of the market turnover. Other top contributors for the day were Nation Lanka Finance and Asia Asset Finance. The share price of Commercial Bank gained Rs 1.00 to close at Rs 103.00. Nation Lanka Finance gained Rs 1.30 to close at Rs 11.10 while Asia Asset Finance gained cents -/10 to close at Rs 2.90. A marginal net foreign outflow of Rs 17 mn was recorded for the day.

The positive momentum continued into Thursday with the ASPI edging up by 55 points at 5,730 and the S&P SL20 up 13 points at 3,104. A moderate market turnover of Rs 518 mn was witnessed on the back of several crossings in blue-chips which collectively accounted for over 40% of market turnover. HNB headed the highest contributors list followed by JKH, Nation Lanka and Peoples Leasing. The share price of HNB lost Rs 1.20 to close at Rs 147.00 while JKH closed flat at Rs 219.00. Meanwhile Nation Lanka lost cents -/10 to close at Rs 11.00 and People Leasing gained Rs 1.00 to close at Rs 14.20. A net foreign outflow of Rs 105 mn was witnessed during the day.

Market sentiments remained positive throughout the week and are likely to remain so within the next three months as we continue to witness retail activity edging up sporadically as well as strong foreign presence trading across counters. The reduction of the Treasury bill rates and the upward trend we see in world markets nodding in agreement to the averting of the controversial fiscal cliff bill may nudge the Colombo bourse to head towards a positive direction.