» Will the Market Sluggish ?
by stockchaser Today at 9:20 am

» CFIN - Bonus Issue & Capitalization of Reserves
by wealth123 Yesterday at 9:57 am

» New Year Wishes for the Community
by samaritan Yesterday at 9:49 am 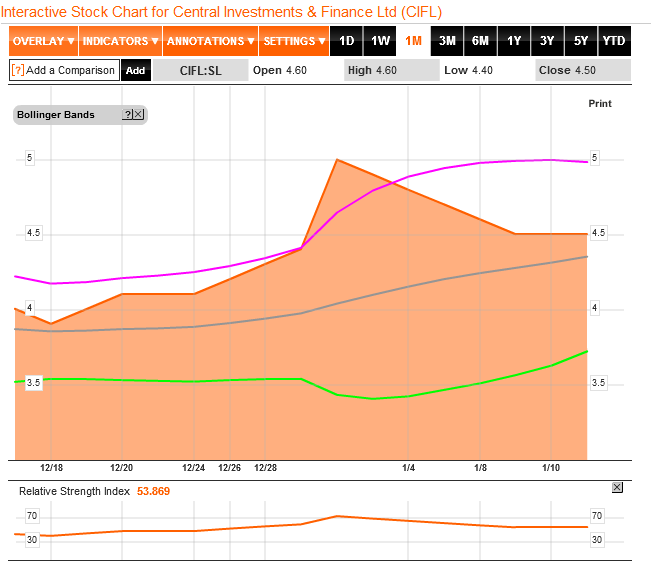 No one realizes the value of this stock, I collected 178,000 shares today at an average of Rs. 4.40. If you have please sell don't worry buyers are there to buy. I think it will come to around Rs. 4.20 tomorrow.

Please disclose a quantity if u have.

@Amaratunga wrote:Excellent buddy, what is your analysis and point, Please conclude

No one realizes the value of this stock, I collected 178,000 shares today at an average of Rs. 4.40. If you have please sell don't worry buyers are there to buy. I think it will come to around Rs. 4.20 tomorrow.

Please disclose a quantity if u have.

Highly qualified and experienced Jayanth Wickremeratne has been removed as the CEO and Executive Director of Central Investments and Finance Ltd., controlled by ASPIC Group.
In its filing to the CSE, the company didn’t give reasons for removal, but industry analysts alleged the move was with the approval of the Central Bank, which had stepped in to improve stability of the company.
Wickremeratne joined CIFL in 2008 as Chief Operating Officer. He started his career at Commercial Bank and has gained over 31 years of experience in financial institutions in Sri Lanka and overseas.
He has performed successfully in leading companies pertaining to forming and achieving divisions/branches while introducing many financial mythology and efficient business ethics. He has also motivated many teams, with the ability and exposure to handle large teams and an effective customer base. He has professional affiliations from the Institute of Bankers (Canada), as per the CIFL 2012 Annual Report.
In 2011/11 Financial Year, CIFL had mixed performance and tough times appear to be continuing well into the new financial year as well.
After three years of growth in profits from Rs. 2.19 million in 2008/9 to Rs. 22.73 million in FY10/11, CIFL saw after tax profit dip to Rs. 8 million in FY11/12. Top line however had seen steady growth from Rs. 538 million in FY09 to Rs. 602 million in FY12
However, in the first six months of FY13, fortunes of the CIFL have taken a turn for the worse.
The company has suffered a net loss of Rs. 31 million during the six months ended September 2012, as against a profit of Rs. 5.6 million a year earlier. Loss before VAT and taxes were Rs. 29 million, in comparison to a profit of Rs. 9 million. Net income was down by 4% to Rs. 131 million whilst revenue had grown by 29% to Rs. 372 million in the first half of FY13. The second quarter has been most affected, with a loss of Rs. 31 million, as against a profit of Rs. 2.7 million in the second quarter of the last financial year. Net income was down by 27% to Rs. 49 million.
Its housing business had suffered the biggest loss of Rs. 15 million in the first half whilst the loans business incurred a Rs. 11 million loss. Other segments such as lease and hire purchase, real estate and other investments had made losses in the first half.
Total assets as at September 2012 was Rs. 3.84 billion, up from Rs. 3.6 billion as at 31 March 2012 and Rs. 3.39 billion in September 2011. Liabilities rose to Rs. 3.17 billion as at September 2012, from Rs. 2.6 billion a year earlier and Rs. 2.9 billion as at March 2012. Shareholders’ funds amounted to Rs. 673.6 million, down from Rs. 704 million by end FY12.
In the FY12 Annual Report, the CEO said the company marked a successful debut on the Colombo Stock Exchange in August 2011, offering 40 million ordinary shares to investors. The share price gained 21% during the first day of trade, indicating strong investor confidence towards the sustainable future growth of the company.
Aligned with the core strategic direction of the company, the micro finance portfolio was extended up to Rs. 233.8 million, covering nine key provinces within 22 districts of the country. “Qualitatively, we extremely emphasise on transparency, ethics, accountability, and governance. Core customer deposits grew by 18% over the last year to reach Rs. 2.6 b. Though preference was mainly for shorter tenures, the company maintained a balance mix, as result of our Initial Public Offering that raised Rs. 400 m and increased bank borrowings,” Wickremeratne added.
“The company anticipated a certain degree of uncertainty in market conditions, yet continued to improve the liquidity position than the previous year, through Government securities. Revenue increased to Rs. 602 m, from Rs. 518 m last year. Total assets too saw an increase of 31% to stand at Rs. 3.6 b. The company increased its capital strength with shareholders funds growing by Rs. 408 m to reach Rs. 704 m,” he added.
Aspic Corporation holds 50% along with 21% by controlling shareholder Deepthi Perera