» Related party transactions in Banks cause concerns
by ChooBoy Yesterday at 10:59 pm

» Principal governmental and regulatory policies that govern the banking sector in Sri Lanka
by Lotus Eater Yesterday at 9:18 pm

» Ban of chemical fertilizers is a great news
by ADVENTUS Yesterday at 6:29 pm

» DIPD/HAYC/HAYL
by ADVENTUS Yesterday at 1:11 pm 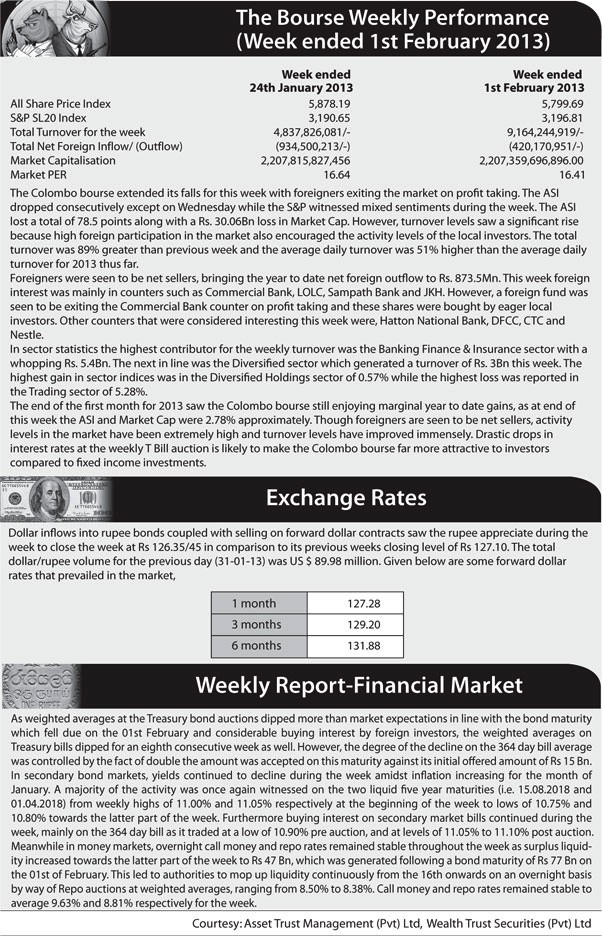 Profit taking on retail driven counters saw the broader index losing ground on Monday whilst gains on a handful of blue-chips saw the S&P SL20 index gaining marginally. Premier blue-chip John Keells Holdings dominated turnover contributing more than 72%. The counter closed marginally higher at Rs. 225.00.
ASI lost 23.10 points (0.39%) to close at 5,855.09 and the S&P SL20 index gained 4.07 points (0.13%) to close at 3,194.72. Turnover was Rs. 759.6Mn.
On Tuesday, retail profit taking persisted whilst foreign picked up blocks in few blue-chips. A general feeling of retail selling was seen today although this is seen as a correction as foreigners still value our blue-chips whilst reduction in interest rates are also expected in the future. Sampath Bank, LOLC and John Keells Holdings were the top picks for the foreigners today.

ASI dropped 54.24 points (0.93%) to close at 5,800.75 and the S&P SL20 index lost 8.96 points (0.28%) to close at 3,185.76. Turnover was Rs. 1,351.0Mn.
Indices closed higher on Wednesday helped by gains on John Keells Holdings, Commercial Bank and Nestle. The former two counters and LOLC saw tremendous institutional interest with Commercial Bank being the pick of the day. Retail activity still remains on the sideline which is seen as a period of consolidation. Yields on all three treasury bills fell further in today’s auction.

ASI gained 25.15 points (0.43%) to close at 5,825.90 and the S&P SL20 index gained 7.87 points (0.25%) to close at 3,193.63. Turnover was Rs. 2,678.7Mn.
Thursday, Commercial Bank and John Keells Holdings continued attract institutional and high net worth investors with the two counters dominating today’s turnover. Retail investors seem to have settled down awaiting another bullish period. Foreign investors exiting certain companies shouldn’t be seen as a worrying issues as these shares are trading at attractive prices and local buying helps to retain future gains. 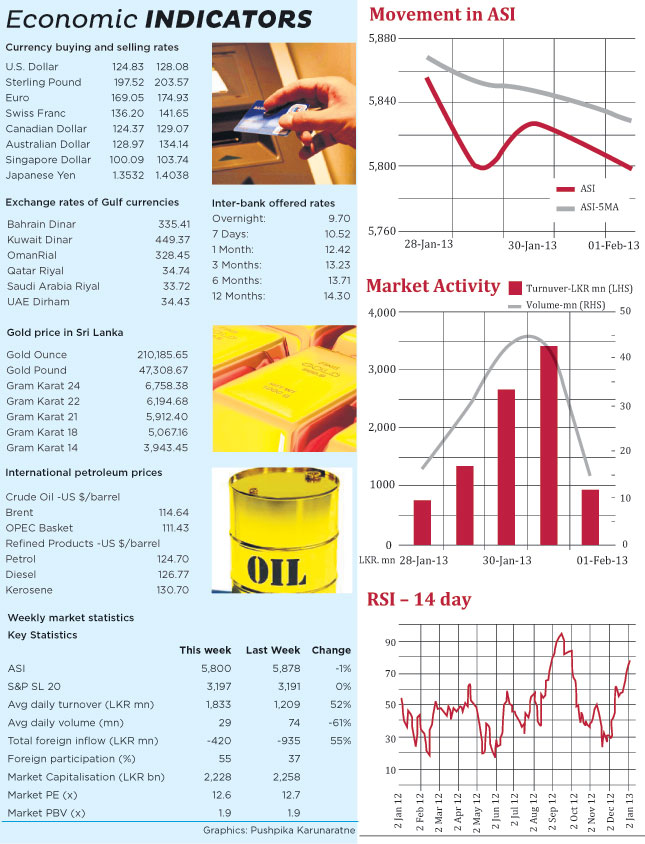