While it is laudable to have such targets so that that the entire country could consciously aim at those, it must be noted that it also provides the Opposition with some ammunition to derail the onward journey, and to distract the economic players from being committed to such targets.

One way in which the Opposition had attempted to cause distraction is to challenge the fundamental concepts of measuring GDP per capita, and to cast some doubt on the GDP per capita being a useful measure in a country's tool-kit of indicators. In that light, it would be useful to examine as to what these terms mean, how these are computed and what relevance these numbers could have in fashioning the economic journey of a nation. 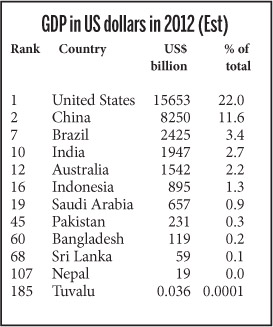 Therefore, current GDP is always adjusted for inflation to obtain constant GDP. Therefore, it is the constant GDP that is used for the calculation of economic the growth rate of a country. In Sri Lanka too, this standard practice is followed.

By dividing current GDP by the mid-year population, the per capita GDP is obtained. This measure provides an estimate of the value of an individual's average contribution to GDP. This is an average (or mean) value and does not consider distributional aspects of income.

Further, since a country's GDP could increase (or decrease) due to changes in population, GDP in per capita terms accounts for any such change in population as well. Assuming equitable distribution, per capita GDP also provides a measure of income at the prevailing prices, which is easily understood by the public.

The country ranking in terms of GDP in US dollars indicates that populous countries in the world generally rank higher than countries with smaller populations. Therefore, to measure the average contribution of a resident of each country to its GDP, per capita GDP in US dollars is a more suitable measure. For example, although China, Russia, India and Indonesia belong to the 20 largest economies of the world, they are not in the top 20 in per capita terms. It is also the per capita GDP in US dollars that is used by major international agencies such as the IMF, World Bank and the ADB to compare countries and classify them according to income.

It must also be noted that per capita GDP in US dollar terms is not used to measure a country's GDP growth. That is because, as stated earlier, this measure serves a specific purpose, which is to provide a country comparison adjusted for population of each country. It must be further noted that since the exchange rate movements closely reflect inflation, especially in an open economy, dividing constant GDP by the exchange rate would serve to discount the per capita contribution to GDP twice.

That is why the global conversion of dividing current GDP by the exchange rate is the measure used for comparison across nations. It must be emphasised that the purpose of computing per capita GDP does not measure income inequality. Several other yardsticks such as the Gini coefficient and Lorenz curve are used for that purpose. However, both redistribution and economic growth are known to reduce poverty and uplift the livings standards of people in general. In that context, while there is a chance for inequality to rise at early stages of take-off, it is undeniable that economic growth in general terms, benefits the greater population through trickle down effects and by making available a larger pie to be shared amongst the population of a country.

Targeting per capita GDP to exceed $ 4,000 by 2016 reflects the Sri Lankan policymakers' desire to reach the level of upper middle income category as per the classification of international agencies. This is only one aspect of the policy mix, and other aspects such as aiming to reduce poverty, unemployment, malnutrition, and improve infrastructure facilities would no doubt address distributional issues effectively.

Several other measures of GDP such as income adjusted for purchasing power parity, per person employed, per unit of energy use exist to serve different purposes, and are also popularly used. No doubt, these measures too, could be meaningful in explaining a given situation.
http://www.sundayobserver.lk/2013/02/10/fin29.asp

The best way to improve GDP is to replace small farmers with large agriculture corporates like in China and America...... however nobody realises this point!!!

@rainmaker wrote:GDP can only be raised quickly by three things 1) export oriented industrialisation 2) increased productivity 3) moving up the value chain

The best way to improve GDP is to replace small farmers with large agriculture corporates like in China and America...... however nobody realises this point!!!

and also developing the retail and construction industry

Posts : 2577
Equity Stars : 7981
Reputation : 115
Join date : 2011-04-08
Strong platform motivating the industry, productivity & export activities is prerequisite by strengthening the transparency of legal aspects, employer trade union relations, attractive tax concessions on imported materials & export of goods & stabilizing the peaceful working environment distancing the infected politicization.
Outcome of the above sets in the requirement of finding emerging markets rather leaning heavily on traditional markets with balanced international trade policies. What policy makers honestly do should be well executed by the rest leaving behind petty political favors. Well balanced implementation of such activities will definitely contribute to push up the GDP of the country.