How does the standard of Living of the people improve? 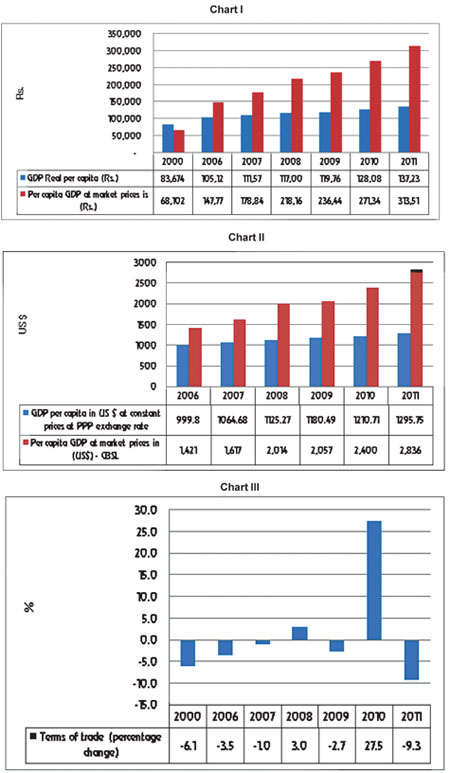 The Government converts the nominal GDP per capita to US dollars at the average rate of exchange which prevailed during the year. But the Rupee has been pegged and its Real value has depreciated and hence what is needed is to convert the Real GDP per capita at the purchasing power parity exchange rate which has been done by the World Bank. Their figures are shown in the chart below: (See Chart II)

Our Real GDP per capita in 2011 was $1296 which may be compared with the GDP per Capita in nominal terms of the Government which is US$2836 or less than half of the figure.

GDP per capita even the Real version ( inflation adjusted) is however not the best measure of the standard of living. It measures only the goods and services available for all the people. It is an average and like all averages can arise from a skewed distribution of incomes with more people below the average. It also ignores the quality of the goods and services. Many technological innovations have made new products available which make our lives richer than what our ancient kings enjoyed or even our grandfathers or even fathers enjoyed even when they were rich. Other measures such as the quality of health care, quality of education and inequality in the society also matter. Other measures of the Standard of living are access to certain goods (such as number of refrigerators per 1000 people), or measures of health such as life expectancy. These measure the ease with which people are able to satisfy their needs and/or wants. So other measures like the Human Development Index and Prosperity Index have been developed. The quality of the environment is now assuming increasing importance with the high rate of air pollution in cities like Beijing which reduce human welfare. More complex means of measuring well-being must therefore be employed to incorporate these factors too into the judgment; but these are controversial. Even between two nations or societies that have similar material standards of living, quality of life factors may in fact make one of these places more attractive than the other. So the level of material comfort as measured by the goods, services, and luxuries available is still the usual measure of the Standard of living of an individual or nation. On this measure our living standard has certainly improved but it is more for those in the upper rungs of the income distribution than for those at the bottom. But have the numbers in the lower income ranges increased or decreased? This concerns income inequality and is measured by what is called the Gini coefficient which has risen in recent years showing greater inequality.

What factors increase the Standard of living?

There are two factors: the physical productivity of our labor and the terms of trade. Consider the first which is the physical productivity of labor. If a greater quantity of the product can be produced for the same hour of work or man/hour then the income to society would have increased. But we cannot add up different product increases except in terms of money but money itself changes in value with inflation. So we consider the purchasing power of the income produced by an hour of work. Labor productivity is the amount of output per hour worked and may be denoted by "?". If the price of that output is P and the consumer price index is Q, the purchasing power of an hour of work = ?P/Q. (The consumer price index is however a function of both domestic and imported prices). We must consider measures of labor productivity after adjusting for inflation.

The Government is using the public sector as a social security scheme to employ the graduates who are not employable in the private sector. So there may not be much room to transfer these persons to the private sector. But if these graduates can be trained in skills like accounting they can be employed in the voluntary sector. I remember when I worked in the Ministry of Trade how few Co-operative Societies had proper accounts. Perhaps they could be seconded to be accountants in these societies even with the government paying them their salaries.

Utilize the spare capacity in our State Corporations

Consider also the public corporations. The Central Bank publishes a table showing the production capacity and the actual production of our industries -Table 25. They average only about 80% and hence there is scope for greater production. There is Table 27 which shows the Capacity and Production in State Corporations. Many Corporations don’t even give their capacity figures. The average capacity is only about 83%. So we can increase our standard of living by increasing their production as well. Of course the problem they may encounter is that their extra production may not be marketable since their prices may be too high particularly if they are to compete with the private sector and imported products. This problem would not arise if there is a free market economy. Then resources including labor will be diverted to the activity that produces the highest productivity relative to the wage. Activities with high productivity can afford to pay more for labor and therefore can attract labor away from the activities were they are less productive. The market economy requires that wages should be determined by productivity and not by Collective Agreements where the inflation and cost of living changes are taken into account in fixing wages. It is very necessary to limit inflation to a few percentages well below 5% to prevent cost push inflation. In the developed countries even 3% inflation is considered too high while we accept even 9.5 %.

The Government runs huge budget deficits and these are partially funded by printing money for their borrowings are largely from the Central Bank (indirectly) and the banking system. So while our real GDP growth rate is 6-7% the money supply increases by double that number and even hits 18-20%. So it is not possible to reduce inflation unless the budget deficit is reduced considerably and is funded only from public borrowings and not from the banking system. But this requires market determined interest rates. But that would mean higher interest rates which would increase the debt servicing cost of the budget. Our debt is too high and our interest on debt absorbs over 35% of the tax proceeds. So the Government has no money to give for education or health care.

When will the government realize that it must cut its expenditure and allow market determined interest rates and productivity determined wages? The latter requires dismantling the over-protective labor laws and allowing a free market for labor. Perhaps the Government should allow employees who want to work for less wages than the statutorily fixed wages to do so. This will increase our standard of living through a higher GDP.

This is the other determinant of the standard of living. Any increase in the prices of our exports relative to those which we buy (imports) raises our real income. There is fluctuation in the prices of food commodities. We still produce and export tea, rubber coconut and spices. We still import food particularly subsidiary foodstuffs like potatoes, onions, chilies and canned fish’. The prices of food commodities fluctuate as do the prices of tea and rubber. The Central Bank publishes a Table which gives the terms of trade. Here they are (See Chart III)

Note how in 2011 we lost 9.3% of our income because of the adverse terms of trade while in 2010 we gained 27%. So changes in our terms of trade can affect our standard of living.

The factors dealt with above as productivity and the terms of trade are the factors that affect changes in our standard of living in the short term. In the long term the decisive factor is technology. We must adopt modern technology which increases our productivity of our labor and improve and upgrade the quality of our labor through vocational training and the inculcation of proper work ethics.
http://www.island.lk/index.php?page_cat=article-details&page=article-details&code_title=73298