» GLAS will be winner with Super Gain.
by Promoney Yesterday at 8:19 pm

The week prolonged last week’s sluggish momentum with weekly turnover levels remaining below par. A similar momentum was also witnessed in most of international stocks. MSCI world index which measures the stock market performance of developed countries witnessed a WoW dip of circa 1.1%. Most European stocks stumbled due to the regions weak recovery process from the recession, while the US official data showed an increase in the country’s unemployment rate which would have also contributed to the lacklustre momentum. MSCI frontier market index which measures the stock market performance of frontier markets also witnessed a marginal dip of circa 0.3% WoW.

Entities continued releasing their December financial results this week which on average has been below expectations, as most companies have witnessed a slowdown in their business activities during the quarter. In addition IMF revised down growth rates for Sri Lanka due to high inflation risk and lower tax revenue collection, coupled with the impending hearing at the United Nations Human Rights Council (UNHCR).

During the week, investor focus was centred upon selected Bank, Finance and Insurance and Diversified counters with each sector contributing a circa 48% & 30% to the week’s turnover respectively. Hatton National Bank spearheaded the market contributing circa 30% of the weekly turnover along with the announcement of an attractive final dividend further enhancing value of the counter. The share also encountered positive news during the week where the government obtained the cabinet approval to borrow from Hatton National Bank to finance two colossal infrastructure projects.

Hence all three investor groups were seen active on the above high cap banking counter.

Further, John Keells Holdings also continued to gain investor interest where the counter witnessed several off market deals during the week. John Keells Holdings made a price gain of 3% WoW to reach a 52 week high of LKR236.50 on Friday. Commercial Bank of Ceylon also witnessed heavy investor play during the week where both institutional and retail investors were active on the counter. In addition, Ceylon Tobacco Corporation, Asiri Surgical Hospital and Sampath Bank also joined the top turnover calibre during the week.

Significant foreign investor interest was observed over the week with foreign purchases amounting to LKR2,664.6 mn,whilst foreign sales amounted to LKR1,950.7 mn. Market capitalisation stood at LKR2,199.8 bn, and the YTD performance is 1.6%.

Sentiments at the Colombo Bourse appears to have witnessed an about-face during the week with both the ASI & S&PSL20 index losing
considerable value and the YTD performance of the ASI falling below 2%. This has been accompanied by a marked decline in turnover and volumes for the week compared to the previous weeks. This decline may be a response to a combination of factors including; weaker than expected quarterly earnings results, the IMF’s decision to revise down its GDP growth forecasts of Sri Lanka for 2013E from 6.5% to 6.3% as well as the heightened political risk arising from the coverage surrounding the outcome of United Nations Human Rights Council (UNHRC) decision. Further, the recent decision to prevent the outright sale of private land to non-citizens may not augur well for foreign activity in the Colombo Bourse. While investors revise down their expectations to take into account short term weaknesses in the economy, institutional & foreign interest continues to be sustained in large cap blue chip counters which are perceived to have high growth prospects. The IMF too concedes that while short term weaknesses persist with respect to the economy’s fiscal deficit and BOP position, the economy has achieved sufficient structural changes to enable it to maintain its current growth trajectory, which the IMF projects to be the highest for the South Asian region. Hence we expect earnings of fundamentally sound counters to be consistent in line with these growth prospects and hence we reiterate that investors should maintain a long term view of investing to maximise their returns.
Source: Weekly Review by Asia Wealth Management Research

Negative implications of the West-backed human rights proceedings coupled with profit taking hit the indices in this week trading. Although the former point was accounted for during last year’s bearish trend, further proceedings by the West has hurt Sri Lanka’s image. We witness a mixed bag of results from the December 2012 quarter although companies in specific industries which are positioned to outperform others have posted improved results. A period of stock picking is upon us as we can expect a slight bearish trend in the near term.

Interest on John Keells Holdings failed to lift up spirits at the CSE Wednesday as the overall market was sluggish. A handful of blue-chips such DFCC, NDB, Ceylon Tobacco Company and Chevron Lubricants also gained ground. It seems buying interest is only evident in fundamentally sound blue-chips during the past few weeks. Yields on treasury bills were flat across all three maturities which might indicate that the interest rates will stabilize at prevailing levels.

John Keells Holdings was the bright light in a sluggish market as it helped to minimize the losses on the indices on Thursday. It reached a 52-week high of Rs. 235.30 with a block trade done at Rs. 235.00 whilst also contributing around 68% of the turnover. Banking stalwart Sampath Bank saw its share value plummet by Rs. 7.40 or 3.16% to Rs. 227.00. The counter’s price was partly driven by foreign accumulation and interest in the very recent past.

Further gains from John Keells Holdings managed to uplift the sentiment with Hatton National Bank and Commercial Bank also managing to close higher on Friday. HNB announced a Rs. 7.00 dividend today. Ceylon Tobacco Company saw its share value drop by around 2.1% to Rs. 800.00. As many counters are showing bearish trends, it is an ideal opportunity to buy at relatively lower prices and thereby benefiting from cyclical movements.

Cash map for today was 51.48%. Foreign participation was 23% of total market turnover whilst net foreign buying was Rs. 94m. 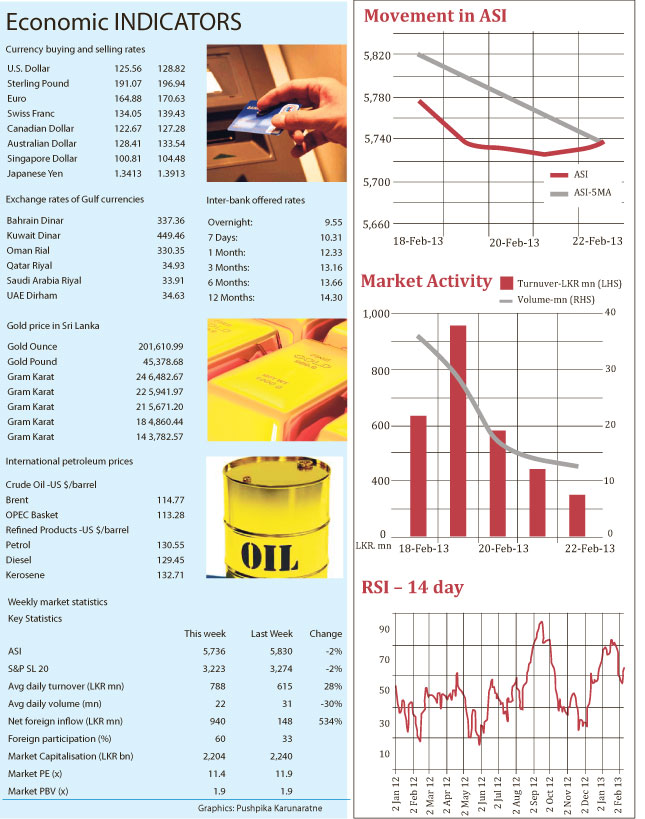 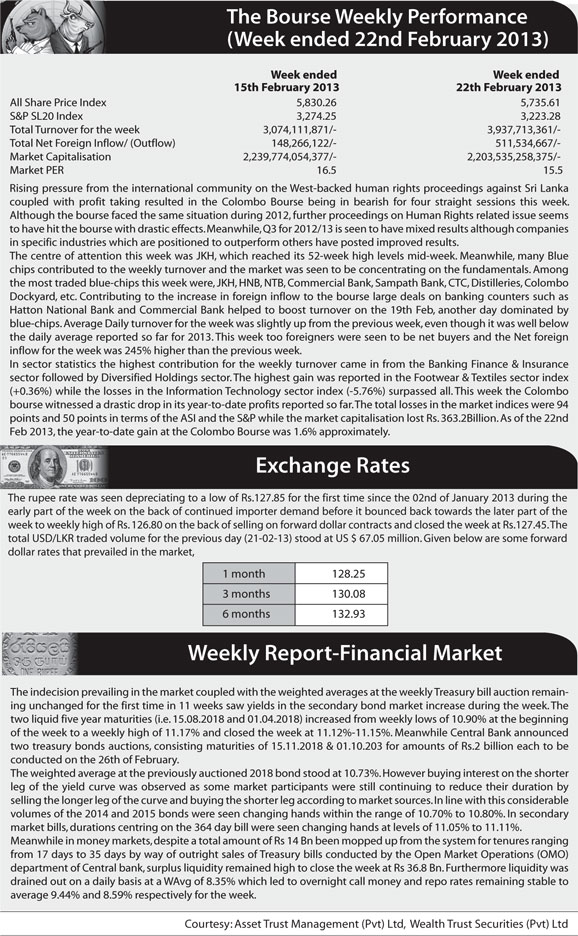