A portfolio that lets you sleep at night

The book outlines “17 simple rules of financial safety”. The chapter for Rule No. 11 is called “Build a Bullet-Proof Portfolio for Protection”. In that chapter, the author makes a case for a diversified investment portfolio of stocks, bonds, cash and gold to ensure financial safety.

According to the author, this type of portfolio has the goal of assuring “that you are financially safe, no matter what the future brings”, including economic prosperity, inflation, recession or deflation.

This, the book says, is because some portion of the portfolio will perform favourably during each of those economic cycles. The book calls this type of investment portfolio a “permanent portfolio” and advocates it be re-balanced once a year so that the 25 per cent allocation is precisely maintained for each asset class.

According to Mr Browne, a permanent portfolio should be safe, simple and stable.

A fund manager friend mentioned this concept to me recently. He seemed pretty convinced of the robustness of such a portfolio.

“It would reduce a lot of the volatility associated with stocks, and yet still give investors good compounded returns over the years,” he said.

That statement piqued my curiosity. How exactly would such a portfolio perform in Singapore in the past 10 years or so?

So I set out to do the research. Here’s what I did.

I downloaded the year-end numbers for the Straits Times Index (STI), the price for gold, the 10-year government bonds, and one-year interbank rates.

The gold price is converted to Singapore dollars.

The starting year was 2003 – there was not much data available before that.

I started with $1 million in December 2003. I allocated a quarter of that $1 million, or $250,000, to each of the four asset classes – Singapore blue- chip stocks, gold, Singapore 10-year government bonds, and cash.

I assumed dividend yield of 3 per cent in most years, 4 per cent in 2008, and 2 per cent in the more exuberant years. Interest from cash is calculated using the one-year interbank rates.

By the end of 2004, the overall portfolio had grown to $1.09 million. Because it appreciated the most, stocks’ proportion in the portfolio had risen to 26.5 per cent.

Government bonds made up another 25.7 per cent. Cash remained at about 25 per cent, while gold’s share in the portfolio fell to 23 per cent.

According to the strategy, one is supposed to rebalance the portfolio back to 25 per cent for each asset class every year.

No transaction costs are taken into account for this exercise. If this process is repeated every year until the end of last year, what kind of returns would the portfolio have generated?

From the first chart, you can see that there was only one year when the portfolio went down. That was in 2008, when stock prices plunged by half. 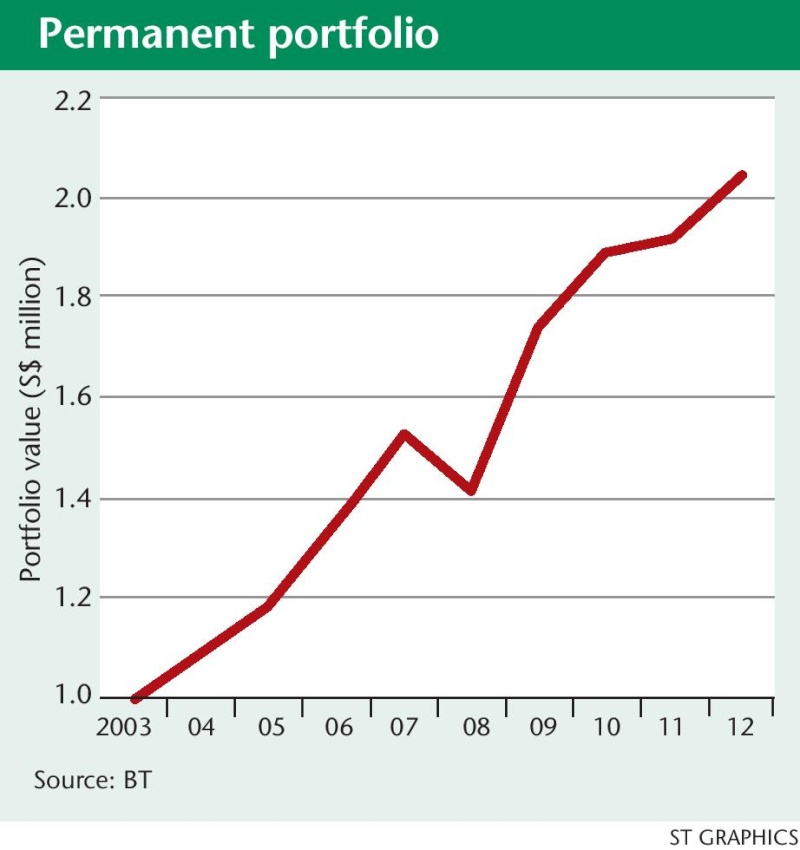 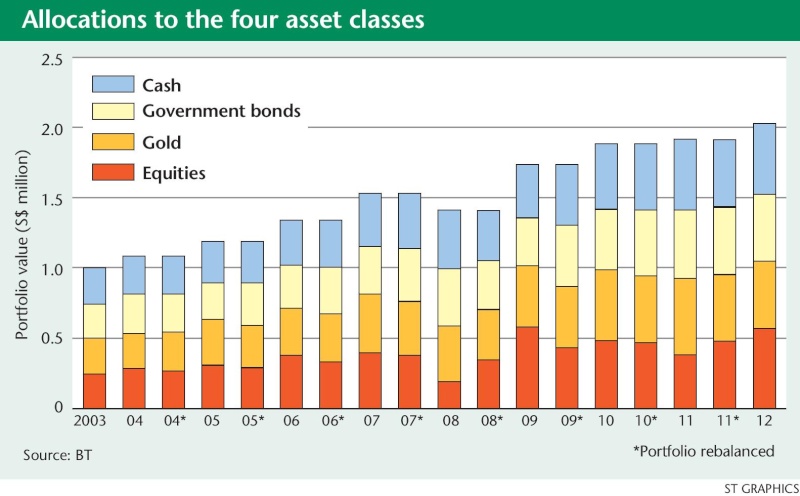 But because of the rebalancing requirement, I ended up selling gold and government bonds and redeployed a large portion of cash back to equities. The following year, the stock market surged by 64 per cent and the portfolio more than made up for all its losses the previous year.

Overall, between 2003 and 2012, the strategy grew that initial $1 million to $2.04 million. That is a compounded annual return of 8 per cent a year. Few mutual funds actually managed this kind of return!

To be sure, there are caveats. The years from 2003 to 2012 were not typical years. During that time, we saw the supposedly once-in-

To get the markets back up, governments flooded the world with money. As a result, confidence in paper money was eroded and people sought refuge in gold.

Gold prices shot up from US$417 per ounce at end-2003 to US$1,665 at the end of last year. Meanwhile, in some of those years, Singapore government bonds were sought-after for their safety.

Going forward, will gold prices continue to rise? They will, if the finances of the world’s big countries remain in a shambles and their governments continue to print money as a way to cope.

Advocates argue that this strategy would allow investors to safeguard their investments during changing economic conditions.

Critics, however, question its ability to outperform stock market indices in an environment of rising interest rates, which could take place in the future.

Obviously, a portfolio with 25 per cent allocation to cash cannot outperform equities in a bull market. But it will in a downturn.

The beauty of this is that it forces the investors to buy the market when it is down, ensuring that they don’t miss out when the recovery comes around.

Overall, I think such a portfolio will be robust enough to withstand the markets’ ups and downs, and at the same time, has the capability to preserve the investor’s purchasing power.

On top of that, investors should be able to sleep rather more soundly at night with such a portfolio.
http://www.btinvest.com.sg/blogs/2013/02/25/a-portfolio-that-lets-you-sleep-at-night/


One thing to note is doubling your portfolio in 10 years might be a good achievement in low interest rate countries.

In Sri lanka , we might have to tweak the strategy to gain higher percentages depending on the economic times.

@slstock wrote:Very interesting article. thanks. The conservative strategy is safer way to play.


One thing to note is doubling your portfolio in 10 years might be a good achievement in low interest rate countries.

In Sri lanka , we might have to tweak the strategy to gain higher percentages depending on the economic times.

Re: A portfolio that lets you sleep at night