» What will happen tomorrow?
by madukp Yesterday at 10:07 pm

» The market is not out to “get” you but is just flowing along, and your position just happens to be carried along with it.
by Asoka Samarakone Yesterday at 9:57 pm

» GLAS will be winner with Super Gain.
by stocknoob Yesterday at 6:20 pm

Foreign Borrowing - Have we reached the prudential limit? 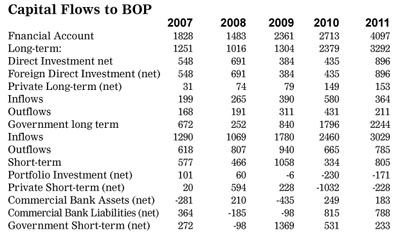 The President has justified foreign borrowings stating that they were used for Investment and not for Consumption. Yes there is a case for foreign borrowings for faster development. Much of the investment in USA on infrastructure like Railways came from Britain. During 1870-1910 foreign capital inflows to Canada averaged 7.5% of GNP and accounted for as much as a third to a half of the total annual investment. Similar ratios prevailed for Australia. Yes as long as the foreign borrowings go into Investment rather than Consumption it is benign. But the projects must also produce returns. Most of the foreign investments into these developed countries and even to China for her development was into private foreign capital projects. Foreign capital inflows to Government took place mostly in Latin America where foreign debt crises occurred several times.

Infrastructure investments take a long time to produce returns and have to be discounted to their present value by the cost of borrowing. Economists have worked out cost/ benefit calculations to rank projects and the government should select projects according to such rankings. This is necessary since there is a trade-off between short and long term growth . Further since we are keeping our exchange rate over-valued, all calculations of Cost/Benefit and returns on investment funded by foreign borrowing are grossly distorted. We should allow the Rupee to be market determined for otherwise we cannot develop import substitution industries or allow our exports of industrial goods to be competitive. Otherwise when we allow imports freely, Chinese goods will destroy or kill local import substitution industries for our cost-price structures are way above those of imported goods from other Asian countries. Ask any local industrialist about it. Our investment priorities need to be analyzed carefully .For example we saw how dairy farmers threw their milk production down the drains because the government owned Highland factory could not buy it owing to its lack of processing capacity. Surely investment in such factories must rank in higher priority than the investments in the mega projects. We saw farmers throwing chilies on the road because they couldn't sell them. Surely rural infrastructure which links rural farmers to the nearest market towns will provide higher growth and benefit the farmers and induce them to produce more

The Risks of Foreign Borrowing

Investment requires savings and our domestic savings rate is only 14% of GDP while we need to invest about 35% of the GDP to achieve a higher rate of growth. Since our Incremental Capital Output ratio is 4.0 -4.5 and if we need to achieve 8% growth we need to invest at least 32% of our GDP. To do so we need to borrow abroad. But the problem with infrastructure investments whether they are to build a port or airport or an expressway is that the returns take a long time to arrive. Consider the fact that despite the infrastructure investments already made the government's tax revenue has not gone up commensurately.

The Internal Transfer problem for the government as borrower

Economists refer to internal transfer and external transfer problems. The internal transfer problem refers to the need for the government to pay the interest on the foreign borrowings from the income generated from such investments. This is the most basic requirement. Our governments are used to re-financing or rolling over foreign debt. But at least the interest component of foreign debt must be generated from the investments funded by such foreign funds. The Government will also have to cope with the depreciation of the Rupee which requires more and more Rupee funds to repay foreign debt and interest. So far government investment in infrastructure has not raised government revenue from taxation or special levies. So the infrastructure investments funded by foreign loans - both project loans as well as general balance of payments support finance have not increased government Revenue. So how will the government be able to repay the interest on the foreign borrowings? It will have to depend on more foreign borrowings to repay both the principal as well as the interest. Is it a sustainable situation? Perhaps, but only if the free movement of foreign capital continues as usual. But we know that in the 1980s foreign capital flows to the developing countries dried up, particularly those to the Latin American countries while several such countries defaulted on their foreign debts. Look at the current situation in Cyprus where a tax has been proposed on the bank deposits of the ordinary public. Ultimately the burden of debt repayments will fall on the general public through austerity programs. Ultimately a reduction in the living standards of the ordinary people will be inevitable if the roll-over of debt cannot be carried out.

Secondly the foreign borrowing has to be repaid in foreign currency and while long term foreign loans may give us time to earn the returns we need and also to earn sufficient foreign currency to repay these foreign loans when they fall due for repayment. So we must earn extra foreign exchange to repay the foreign loans. It is a dangerous fallacy to assume that foreign loans can always be re-financed or rolled over. This will depend not only on the economic strength of the country but also on the global economic situation. In the last few years the developed countries like the U.S.A and the EU have resorted to what is called Quantitative Easing (QE) which is really money printing. A large increase in money supply was produced by QE and this money was saved rather than being spent in these countries. So the savers who had free convertibility on capital account sent their surplus money or savings to developing countries where the rates of interest were several times the rates in those countries. The QE was done to reduce the real interest rate to negative and thereby provide an incentive to private sector entrepreneurs to borrow cheaply and invest. But when these countries regain growth some of the moneys invested in developing countries are likely to be withdrawn. Also they will demand higher rates of interest to roll-over the loans. This brings us to the Debt Servicing charge. 38% of the government tax revenue is presently going to service the interest charge on the outstanding debt. It may be possible to roll-over domestic debt in Rupees but rolling over foreign debt will depend on the performance of the economy. What would be a prudent level of debt and particularly foreign debt. Economists use the Debt/GDP ratio to assess whether the borrowing level is too high. Our Debt/GDP ratio is around 80% while EU countries like Spain, Portugal had well over 100%. In USA it is over 150%. The USA is a special case because it can repay the foreign debt in dollars as the US dollar is the International Reserve currency.

Note how the Government has been increasing long term inflows of foreign capital. The growth rate for 2011 was 23%. The outflows increased by 18% . The outflows are growing at a lower rate. As long as the increase in the inflows (new foreign borrowings by the government) exceed the outflows there will be no problem in servicing the foreign debt of th government. But note that with more foreign borrowing the rate of interest is likely to rise and this means there will be less possibility of investing to make a return. This is probably why the government is asking the banks to borrow in foreign currency to fund the demands for foreign currency by their customers. But will the government be able to continue to borrow more and more over time? This will depend on the strength of our economy, its sovereign ratings and the availability of free flowing foreign capital in the world's capital markets. In the past in the 1980s foreign capital inflows to developing countries did dry up and it created serious debt default problems for several Latin American countries.

We are running an import surplus year after year and an export surplus seems to be a very remote possibility. Net Inflows of foreign income on the capital account to the private sector is low. Since the government is the biggest borrower of foreign capital it must ensure that the reverse flow of capital by way of interest and dividends and the debt is less than the inflow of foreign capital. But there is a risk that when the developed countries which are now in recession start to recover and interest rates in those countries rise there may be less foreign capital available to flow into the developing countries.
http://www.island.lk/index.php?page_cat=article-details&page=article-details&code_title=75843

Posts : 1716
Equity Stars : 7254
Reputation : 52
Join date : 2011-12-13
Location : Kotte
Use of foreign loans by this govt in like ordinary uneducated village man
who use money after winning a Lottery ticket to build Luxary house and buy a Luxary vehicle

RMB has given good Economic Analysis to explain this
unfortunate situation

@D.G.Dayaratne wrote:Use of foreign loans by this govt in like ordinary uneducated village man
who use money after winning a Lottery ticket to build Luxary house and buy a Luxary vehicle

RMB has given good Economic Analysis to explain this
unfortunate situation

Not only foreign loans but also everything. (list will be a long one which all of us know)

"Note how the Government has been increasing long term inflows of foreign capital. The growth rate for 2011 was 23%. The outflows increased by 18% . The outflows are growing at a lower rate. As long as the increase in the inflows (new foreign borrowings by the government) exceed the outflows there will be no problem in servicing the foreign debt of the government. But note that with more foreign borrowing the rate of interest is likely to rise and this means there will be less possibility of investing to make a return."

Isn't this type of thing that got the Ceylinco group and Kotalawela into trouble. Paying interest from new borrowings?

Re: Foreign Borrowing - Have we reached the prudential limit?