» Successful investment strategies require an understanding of the forces of stock market nature, and disciplined rules of portfolio management.
by Asoka Samarakone Today at 9:12 pm

» Sri Lanka FOB prices for black tea highest in the world
by samaritan Yesterday at 12:18 pm

» DPL Take over
by Vishwanarth Yesterday at 12:12 pm

» CITIZENS DEVELOPMENT BUSINESS FINANCE PLC(CDB.N0000)
by engineer Yesterday at 7:06 am

The market leader in pawning business, state-owned People’s Bank, which has pawning advances amounting to as much as 40 percent of the total loans and advances, has already taken measures to minimize its exposure to a possible gold price crash in view of the falling international prices.

“In anticipation of possible global price decline, we have brought down our pawning advances to around 35 percent (from the total advances) and we are daily monitoring the situation as a control measure. We no more encourage gold-backed loans as we did before,” People’s Bank Deputy General Manager Retail Banking G.P.R. Jayasinghe said. 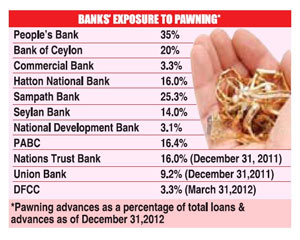 As of September 30, 2012, the total outstanding pawning advances of the bank stood at a staggering Rs.190 billion, even bigger than the total balance sheets of some smaller banks.

According to ‘kitco.com’, which provides live spot prices for precious metals, gold has lost its glitter that kicked off more than a decade ago and peaked during the 2009-2011 period.

Although analysts forecasted gold prices to reach US $ 2,000 per ounce, it never reached its peak in 2012. Instead, the corrections that took place during 2011 and 2012 were strong enough to pull the gold prices down below US $ 1,700.

A senior official at Hatton National Bank PLC (HNB) echoing similar sentiments said that the bank having foreseen this type of a scenario as early as three years ago, took steps to minimize its exposure by not encouraging gold-backed loans.

“Although there is no sudden risk of gold bubble bursting, the prices could decline gradually. We are monthly monitoring our situation and the figures are adjusted accordingly,” he said on condition of anonymity, adding that the bank is in the business of pawning just to move with the flow (competition) and does not encourage aggressively.

Loan-to-value ratio (LTV), the lending risk assessment ratio typically used by the banks, stood at around 80 percent in respect of the pawning portfolio, demonstrating it is currently in the expected average.

However, falling gold prices could lift the ratio above 80 percent indicating a higher risk.
http://www.dailymirror.lk/business/other/27668-banks-cut-gold-exposure-on-possible-price-crash-.html 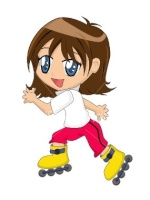 Posts : 1345
Equity Stars : 6803
Reputation : 90
Join date : 2011-01-31
This is one of the reason why investors suspects Sampath assets quality
Commodity exposure was seen as a major risk of Sampath & peoples even by World bank

Gold is just collateral like land, stocks and future income.

@rainmaker wrote:There are plenty of gold futures options available to offset exposure.
Just buy put options at the average cost of the collateral.

Gold is just collateral like land, stocks and future income.

but, this si beyond their capacityT
hey don't have expertise
Not sure whether CBSL permit to take overseas exposure
It has to be off balance sheet instruments are short term
Cost of heading will be significant
Bank will be at loss

Finally , this will slow down gold loans and would affect the growth too

Posts : 914
Equity Stars : 5226
Reputation : 45
Join date : 2013-02-06
@salt It just shows how western banking concepts do not work in developing countries. Proof of income, salary slip etc etc are not practical for most people. Hence gold is the most convenient way of obtaining loans.