Indices dropped led by retail heavy counters on Monday. A sense of profit taking and cautious investing by retailers determined day’s sentiment. With this slight downturn we should expect plenty of bargains ahead. Nestle gathered steam with investors expecting a final dividend. National Development Bank continued to gain ground with the XD arriving shortly. ASI dipped 30.48 points (0.53%) to close at 5,705.20 and the S&P SL20 index lost 11.94 points (0.36%) to close at 3,281.63. Turnover was Rs. 403.2Mn.

A late surge on Tuesday in hand few of blue-chips failed to nullify the earlier losses completely on the broader index. Nestle, SLT and Sampath Bank saw their share prices trade higher. Meanwhile National Development Bank closed higher after an early drop. Banking counters and John Keells Holdings attracted the most attention of day’s interest. Retail counters seem to retreating ahead of the Sinhala & Tamil New Year as some retail investors liquidate their investments to meet their festive needs.

On Thursday, market gained further ground on banking and financials mainly from smaller-capped counters. National Development Bank, Union Bank and DFCC rose further to improve their 52-week high prices. It was encouraging to see plenty of retail activity on smaller capped banking counters. Approximately 19 million shares of Nations Trust Bank amounting around 8.2% of the issued share capital of the company changed hands among the foreign investors. ASI gained 25.09 points (0.44%) to close at 5,753.56 and the S&P SL20 index gained 13.74 points (0.42%) to close at 3,319.01. Turnover was Rs. 1,648.5Mn.

The bourse began the week with a lethargic momentum, with activity levels remaining below average, however, witnessed a rebound during mid week with strong buying spree being witnessed across the board that continued to thrust the week to gain points. Whilst institutional and foreign participation continued to be strongly rooted, it’s noteworthy to mention the improvement in retail participation during the week. As a result, majority of the small to mid cap counters witnessed substantial gains during the week. It should be noted that this overall improved sentiment was observed irrespective of the upcoming festive season, rising secondary market yields and the CBSL data released during the week which indicated a continuing weakness in exports (export dipped 18.2% YoY in January).

Moreover, Banking sector counters continued to shine throughout the week with active participation of investors across the board that primarily shouldered the week’s turnover adding c. 68%. On the back of these developments, the week saw an average turnover of LKR 925.4mn and an average volume of 22.7mn.

As mentioned earlier, the week’s turnover level was largely driven by banking sector, of which Nations Trust Bank played a prominent role witnessing several crossings. The counter witnessed C. 8.2% of its issued quantity that accounted over 18.9 mn shares being transferred to a foreign party at LKR54.0 on Thursday. Further, premier blue chip John Keells Holdings saw over 2.1 mn shares changing hands at prices between LKR 247.0 and LKR 248.0, whilst Sampath Bank and Union Bank too witnessed crossings during the course of the week. Subsequent to the large crossing, Nations Trust Bank spearheaded the week’s turnover adding c. 31% followed by John Keells Holdings, Sampath Bank and Union Bank. In addition, Union bank became the most sought after counter where it reached its 52 week peak during the week.

Conclusion:
Market Lending Rates continue drop, boosting interest on Colombo Bourse…
The Average Weighted Prime Lending Rate of the banking sector decreased over 65 basis points in March reflecting the general moderation of private sector credit demand during the first quarter of 2013. However, on the other hand, Average Weighted Fixed Deposit Rate continued its upward trend and gained over 70 basis points in 1Q2013 indicating that drop in private credit demand is lower than the slowdown in the rate of savings growth in the economy during the period in concern. This is likely to readjust the interest spread of the banking sector together with the level of private credit growth to suit the altered position of market conditions in the economy. The fact that market lending rates may continue to dip gradually despite the prevalence of relatively high inflation indicates that the cause of price increases is a supply side function rather than a persistent relative increase in effective demand. Hence, commercial bank lending rates are unlikely to face upward thrust despite the inflationary pressures prevailing in the economy.

Further, on the other hand, the proposed electricity tariff revisions if enacted may further strengthen the LKR against internationally traded currencies by curtailing consumer demand for a broad base of imports. It would further mean that commercial lending rates are likely to dip further towards the end of 3Q2013 and hence is likely to get realigned with the parameters set by the current level of policy rates reduced back in December last year. On the back of these developments we are of the view that the drop in market lending rates would further assist the trading activity of Colombo Stock Exchange boosting the overall market sentiment towards equity investments in general.

Furthermore, the current increase in the yields of government securities may not in turn negatively impact the market interest rates, given that government is likely to opt for more foreign borrowings preventing the domestic treasury yields from rising further. The fact that the steep drop in imports in January this year indicates that non-debt cash inflows to government coffers would be narrowed during the year, it is in the interest of the state authorities to prevent the domestic treasury yields from rising further. On the other hand, the expected upward revision of electricity tariffs would also reduce the demand for state borrowings and ease the upward pressure on yields. Moreover, prevention of domestic treasury yields from increasing further is vital in order to avoid foreign divestments from treasury securities which may subject the economy to BoP issues. In this light, we believe that the current trend in rising treasury yields may not hold back the expected gradual fall in economy’s commercial lending rates.
Source: Asia Wealth Management Research 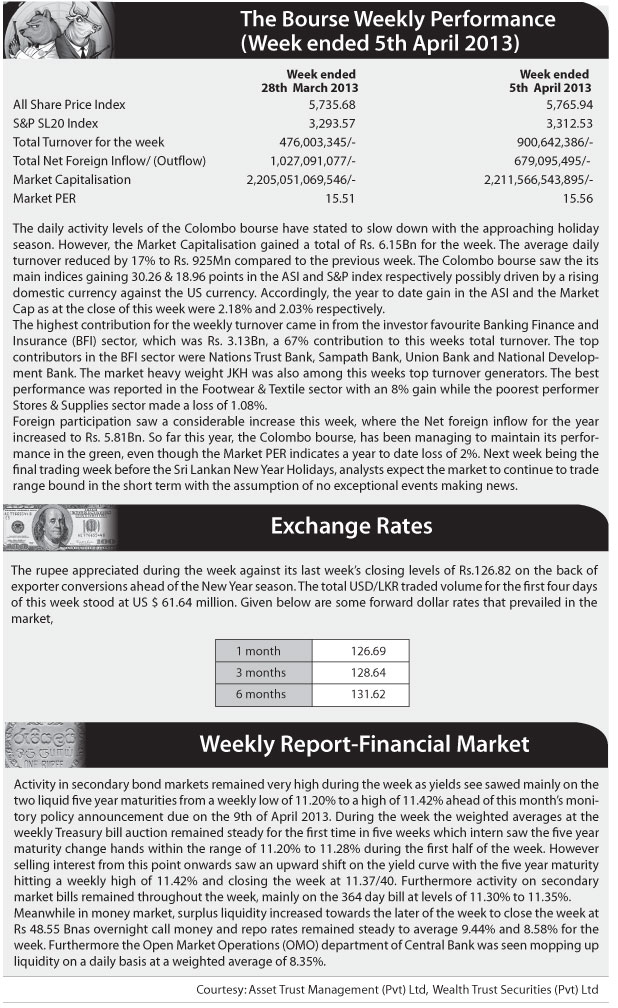