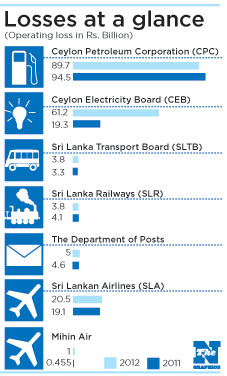 Meanwhile, operating loss at DOP increased by 8 per cent to a substantial Rs. 5bn in 2012, following a 52 per cent increment in 2011, the Central Bank stated.

On a positive note, the financial performance of the Sri Lanka Ports Authority (SLPA) improved significantly despite the sluggish pace of global trade as per unaudited financial data. The operating profit of the SLPA increased by 58 per cent in 2012 to Rs. 13.1bn compared to Rs. 8.3bn in 2011.

Performance at the National Water Supply and Drainage Board (NWS&DB) also improved in 2012 with the operating profit of NWS&DB improving to Rs. 3bn compared to an operational profit of Rs. 1.9bn recorded in 2011.

The Central Bank in its annual report has warned that the lack of strategic institutional improvements to ensure the financial viability of those (loss making) institutions can pose a threat to the macroeconomic stability of the country, considering their importance in the national economy.

“Hence SOEs must be encouraged to adopt sustainable financial and corporate planning including a rational pricing policy in line with market developments. A rational, flexible and transparent pricing policy can be beneficial to both suppliers and consumers and to the economy through reduced uncertainty, less burden on the government budget, and reduced financing from the banking sector’, the annual report highlighted.
http://www.nation.lk/edition/biz-news/item/17233-seven-soes-pile-rs185b-losses.html