» The rupee was now ‘heavily undervalued’ based on fundamentals - Central Bank Governor Nandalal Weerasinghe
by K.R Today at 3:02 pm

Posts : 6053
Equity Stars : 15540
Reputation : 770
Join date : 2012-02-14
Reuters: Gold rebounded more than 1.5% after falling to two-year lows and oil cut losses following another sell-off on Tuesday, although shares dropped for a third day as worries over the health of the global economy prevailed.

The broad rout in commodities and stocks seen in recent sessions has been triggered by weak data from China and the United States that have sparked fresh concerns about the strength of the global economy’s recovery.

A closely watched survey of German economic sentiment added to the worries after the euro zone’s ongoing crisis and economic weakness were blamed for a larger-than-expected drop in confidence in Europe’s biggest economy.

There was no sign of a complete collapse in sentiment that some economists had feared following the recent bungled bailout of Cyprus and the relief helped shares prune losses.

MSCI’s global share index .MIWD00000PUS, which tracks around 9,000 stocks in 45 countries, was down 0.3% after the data, having been nearly 0.5% lower beforehand as European shares .FTEU3, on course for their third straight day of falls, clawed back some ground.

“New uncertainty stemming from the euro crisis and doubts about the strength of Chinese economy seem to have dented analysts’ optimism. However, it only looks like a correction at a level still consistent with modest growth,” said ING economist Carsten Brzeski.

“The big confidence collapse some had expected after the Cypriot bailout has so far failed to appear.”

Gold, which has dominated market attention in recent days, was hovering 1.5% higher at $1,386.15 an ounce with midday approaching as the near-vertical $230 drop in the past two sessions lured back buyers.

Other precious metals such as platinum and palladium also bounced back along with copper, while silver snapped a four-day losing streak.

Gold’s recovery comes a day after it shed $125 an ounce, its biggest ever daily drop, and as the selling that began on Friday stalled after prices hit their cheapest since January 2011.

Analysts have cited various reasons for gold’s slump, including funds switching out of bullion and that other central banks in Europe could use Cyprus’s bailout plans sell excess gold reserves as a reason to sell some of their own holdings.

The already sharp correction has caused short-term investors to flee the asset. The SPDR Gold Trust (GLD.P) hit its highest ever daily volume on Monday with 92.44 million shares traded. The ETF lost 8.8%.

“Given the scale of the sell-off, I would say that the rebound is not that impressive,” said Tim Riddell, head of ANZ Global Markets Research, Asia.

A bombing at the finish line of the Boston Marathon on Monday has also added to volatility in financial markets.

Oil, another key commodity that has been caught up in the sell-off had stabilized at $99.81 after it fell below $100 a barrel for the first time in nine months earlier. 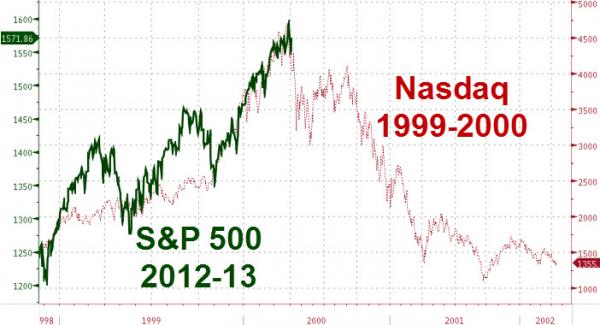 slstock wrote:Kumar am trying to get the meaning. Ovelapping SP500 with nasdaq, is it to show there is a possible crash after the hike is it?
The link says no comments by author.

I too was trying to make sense of this graph and was wondering whether it was one of most senseless graphs ever. one of comments by Big Slick on this blog (below the graph) summarizes my sentiments too...

quote
" Seriously ZH?
I'm not saying we aren't in deep doo-doo but when you make lame comparisons like this you start to undermine the ability of people to take you seriously.
Two aspects of two very dissimilar charts that track different indexes from two different points in history showing brief similarity!!?? Call my broker!!!! (sarc)" unquote