Under the new tariffs a proposal to charge domestic users by the highest rated block instead of differently priced slabs, which ran into stiff opposition at a public hearing had also been approved.

Low user, domestic users had been the most highly subsidized users along with religions categories, industry and government offices.

Due the ending of slabs, those who exceed thresholds such as 90 will see a 1,000 rupee increase when they reach 91 units.

The regulator denied a request by the CEB to reduce the tariff of large domestic users to 32 rupees above 900 units a month to 32 rupees and has maintained a rate of 34 plus 40 percent fuel surcharge.

High user domestic tariffs at around 44 rupees a unit with the fuel surcharge are more than twice the average cost of 20 rupees a unit.

Other tariff requests to general purpose, government, religious and industry had been approved as submitted. Large users have been given time of day tariffs with high charges for the evening peak.

Last year the CEB lost 61.2 billion rupees and the Ceylon Petroleum Corporation which supplied fuel below cost 89.7 billion rupees. CPC is expected to raise furnace oil by around 50 percent from April.

The regulator has imposed a series of conditions on the CEB including installing dispatch planning software, setting up a bulk supply account, providing power purchase agreements with generators and striking long and medium contracts for coal.

Fantastic. Great thinking of the bright people to screw up the medium class.

@slstock wrote:Does anyone remember the difference in costs between old scheme and new scheme for industries.

For industries 2 & 3 if they can run offpeak they possibly can save?

No sure how the demand charge is used and which companies fall into Ind 1 , 2 ,3 .

Co-Admin
Posts : 6822
Equity Stars : 21908
Reputation : 2855
Join date : 2011-02-01
Location : London
It is frequently assumed that the subject of economics is chiefly concerned with the movement of money. This is incorrect. The main preoccupation in economics is how people make choices. The key to understanding and guiding an economy is this distillation and aggregation of individual choices. 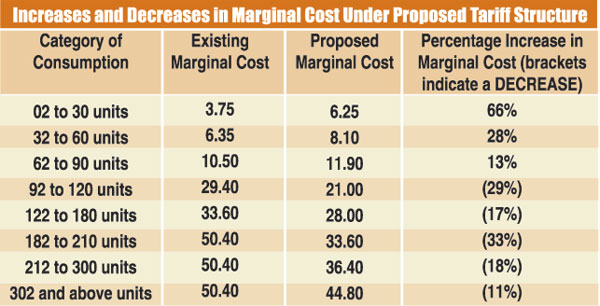 Quantity is determined by the marginal
Let’s take an example. Petrol is priced higher than diesel in Sri Lanka. As a result, owners of petrol vehicles pay more for every kilometer of running than owners of diesel vehicles. To compensate for this indirect subsidy, family-owned diesel vehicles are subject to a hefty annual tax.
As a result, when the total tax plus fuel price is added up, it could very well be the case that ‘on average’ the diesel vehicle owner pays more per kilometer. But when it comes to deciding on whether it would be a good idea to nip down to Galle and back on a poya holiday, it is also the diesel vehicle owner that is more likely to choose it. That is because the cost per kilometer for that extra running is very much less than for the petrol vehicle owner and it is that ‘marginal cost’ that determines the choice of ‘how much’ to run.

Bygones are bygones
High fixed costs that increase the average cost of consumption are what economists call ‘sunk costs’. They don’t determine choices after that cost is paid.

High fixed costs can affect a person’s disposable income and with that their sense of being richer or poorer. This ‘income effect’ would lead to consuming less in general of everything and looking for cheaper substitutes of those things that are being consumed. In our example, the hefty tax paid by the diesel vehicle owner is a fixed sunk cost.

The resulting ‘income effect’ (making him feel poorer) could lead him to look for less expensive hotels in Galle, but it will not discourage him from travelling itself (because for the travel cost, he already has the cheaper substitute).
In fact, the ‘the buffet effect’ could kick in and cause him to travel even excessively more to psychologically justify the high tax already paid! (Don’t people often eat too much at buffets where the fixed and average cost is high, but the marginal cost of extra food is zero?) 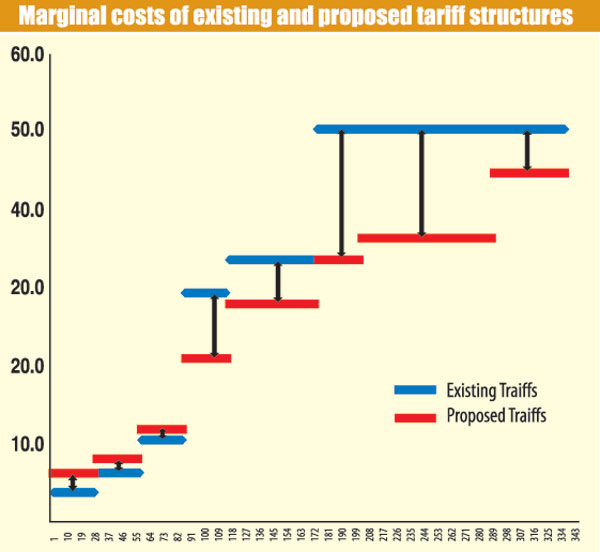 It’s same with electricity
This logic applies to consumption of electricity as well and even more so, because what substitute does a home have for electricity? The poorest, without refrigerators, could switch to kerosene lamps (but the price of kerosene has also skyrocketed recently).
The new tariff structure proposed by the Ceylon Electricity Board (CEB) significantly ‘increases’ the average price of electricity and the increase is much greater for those that consume less. But in a befuddling twist, it changes the structure of pricing so as to ‘decrease’ the marginal price and especially for those who consume more.


Graph tells the story
The graph looks complicated but is simple to understand. It shows the extra cost a person has to pay for a single extra unit of electricity at various levels of consumption. It shows this both under the existing tariff structure and the proposed tariff structure.
This is what the graph says: The proposed tariff imposes a much higher marginal cost than at present on the first 30 units of consumption: A 66 percent increase. And, less, but still, an increase in marginal cost up to the first 90 units (28 percent and 13 percent, see the table for the numbers).

So, here is what the new electricity tariff is going to do. It is going to make people feel poorer and also induce them consume more electricity, thereby forcing reductions in everything else like food and newspapers.


Economics not accounts
Typically, an accounting approach can focus on pricing that is geared to recover costs. The new tariff structure is projected by the CEB to change the total revenue from the domestic sector from what was previously a very large subsidy of 39 percent to a small profit of about 2 percent (based on costs). That is a big shift. But the approach to pricing is wrong-headed and self-defeating.

Second, it is also the last units of electricity that cost the CEB the most. Hydropower for instance costs less than about Rs.5 per unit to produce. Coal power costs only a little bit more. Given the average cost in excess of 20, it means that the extra units purchased from Independent Power Producers could be costing the CEB well in excess of Rs.30 (some unconfirmed estimates place it at above Rs.60).

This means that those consuming between 92 and 210 units that are now being encouraged to consume more by the new tariff structure could in fact be paying less for that extra consumption, than it costs the CEB to source that extra power to them.

There is more to be done for a comprehensive analysis. But the insight is important. The structure of the problem is better represented from an economics rather than purely accounting approach. This is why the proposal for the new electricity tariffs would have benefited by some tête-à-tête with economists. Maybe it is not too late.

(Verite Research provides strategic analysis and advice for government and the private sector in Asia)
http://www.dailymirror.lk/business/features/28214-new-electricity-tariffs-cost-wise-price-foolish.html

Posts : 2577
Equity Stars : 7819
Reputation : 115
Join date : 2011-04-08
Frequent sterile solution & oxygen have been given, at the expense of overburdened people over years & years. Recovery of paralyzed patient is very remote with medication prescribed. Non diagnosing the causes for gradual paralyzing keep changed the prescription until the last breath. Eventually no one identifies the dead one.

A person who cna afford Rs 40000 electricity bill possibly can afford Rs 60000 . But there is no change.

Rob the poor and feed the rich right.

Seriously, I feel sick with these people who think these things and these commisions who study 100s of reports and do nothing.

Seriously, I feel sick with these people who think these things and these commisions who study 100s of reports and do nothing.

Posts : 191
Equity Stars : 3647
Reputation : 3
Join date : 2011-11-22
Location : Earth, Milky Way Galaxy
Now most of the people will think to maintain their light bill not to exceed 90 units. This will give people good motivation to save electricity.

If CEB need to recover losses, CEB should target a large audience. I think most people are are using below 90 units. Then according to my point of view this is correct.

@stockmania wrote:Now most of the people will think to maintain their light bill not to exceed 90 units. This will give people good motivation to save electricity.

If CEB need to recover losses, CEB should target a large audience. I think most people are are using below 90 units. Then according to my point of view this is correct.

Trying to profit by reducing sale.. wonder inst it