The majority of i nflows, approximately 45 percent, were directed towards infrastructure-related development projects, including development of telecommunications networks, port container terminals, power generation and property development.

Meanwhile, the total investment attracted through the Board of Investment of Sri Lanka (BoI) during the year stood at Rs.248 billion, of which Rs.174 billion consisted of foreign investments and a remaining Rs.75 billion worth of local investments. 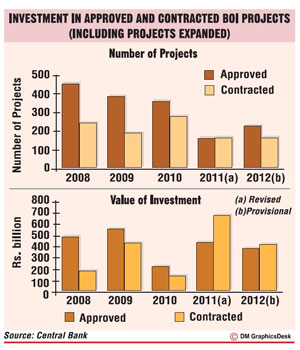 All investments registered with the BoI last year are expected to lead to the creation of 3,594 jobs in the country.

In total, 68 projects were approved by the BoI in 2012, while the Ministry of Industry and Commerce registered a further 42 projects.

The projects registered with the ministry during the year reached a value of Rs.3 billion.

The majority of BoI investments were directed to the services sector, followed by investments into the food, beverages and tobacco segment of the manufacturing sub-sector, according to the Central Bank of Sri Lanka.

Investments contracted under section 17 of the BoI Act, the primary source of investments into the country, reached Rs.248 billion, while section 16 investments were recorded at Rs.338 million