To find out who today’s CEOs look to for guidance, in this year’s survey we asked them to share an example of someone from literature or history who exhibited good leadership, and what the CEOs admired about them. We were interested in the types of leaders they named as well as their reasons for naming them. The variety of characters -- and character traits -- reveal both strengths and possible shortcomings in the minds of today’s global CEOs.

The top ten people named by CEOs across seven regions and over 60 countries were:

The influence of geography, culture and gender

But we were also interested in finding out the extent to which culture and geography influenced CEOs’ choices. Would CEOs look for guidance in the distant past - in markets that have shaped global capitalism over the past two centuries? Or would they look at the countries that are leading 21st century economic growth? What we found was that emerging market CEOs were more likely to look across boundaries for role models while also paying homage to local heroes. Meanwhile, North American and Western European CEOs had more homogeneous, home-grown tastes. This might reflect their markets’ dominant economic standing in recent history - but could also be an obstacle to their ability to adapt to different cultural traits that are gaining (or regaining) prominence as the global economy rebalances.

Map showing the top leaders named by CEOs across the world 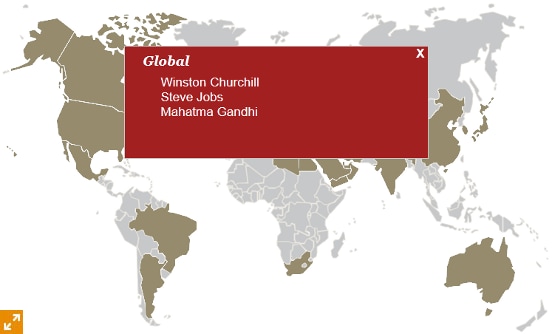 Fifteen female leaders were named, of which Margaret Thatcher was the only one to make the top ten – indeed the only woman to garner more than a few mentions. The next most-named women were Angela Merkel, Ayn Rand, Mother Teresa and Queen Elizabeth I. Here again, the breadth of their appeal was evident – for example Angela Merkel was named by CEOs in South Africa, Germany and Venezuela. Female CEOs were more than four times more likely to select female leaders than male CEOs: 17% of women CEOs chose women leaders, with 78% choosing male leaders. 4% of male CEOs, meanwhile, named female leaders and 95% named male leaders1.

What types of leaders and leadership qualities do CEOs most admire?

What also stood out was the predominance of political/military leaders - mainly from the post-war era - chosen by 60% of CEOs. Next were business leaders, chosen by a quarter of CEOs.

But despite the commonalities in their spheres of life, the leaders who were chosen represented a wide range of typologies. For example, there were warmakers like Napoleon and Alexander the Great, tough reformers like Margaret Thatcher and Jack Welch and leaders through adversity like Winston Churchill and Abraham Lincoln. There were peacemakers like Mahatma Gandhi and Nelson Mandela and consensus-builders like Bill Clinton. And there were innovators like Bill Gates and Steve Jobs.

Beyond this, CEOs also cited a range of qualities about the leaders they chose. Those with a strong vision were most admired, but motivational, caring, innovative, persistent and ethical qualities were also held in high regard. It may be that choices of leader are driven at least in part by the prevailing mood of the time, which could explain why so many CEOs chose leaders who were persistent in the face of adversity – as well as transformational leaders and leaders who did the ‘right thing’.

What’s also notable is the wide range of qualities used by different CEOs to describe the same leader – and how the same qualities were used to describe very different types of leaders. Leaders who use different means to achieve the same objective, and who embody a range of skills and attributes are very much the leaders needed for today – those who can steer their organisations in dynamic ways and quickly respond to changes in the environment.

What leadership qualities are required of today’s leaders?

It’s clear that the role and expectations of leadership are changing – and with it the qualities needed to be a leader. The revolution in digital communication, for example, and the greater transparency it requires of organisations, means that leaders must spend much more time engaging with a wide range of stakeholders. Investor pressures and regulatory requirements, meanwhile, create conflicts between meeting short-term targets and longer-term strategies. The ambidextrous leadership qualities that CEOs admire increasingly set the bar for good leadership today.

But are they enough to take businesses to the next level – one that allows businesses to fundamentally challenge the role they play in addressing social issues and influencing global outcomes? Although we asked about role models from history or literature, almost no CEOs cited fictional characters and very few cited philosophers, writers or artists. While these findings might play right into the stereotype of effective CEOs as realists rather than dreamers, they’re also concerning: the challenges facing our world today need imagination and character to solve. They need, for example, the ability to envision how the way we act will influence society and the environment for decades and centuries to come. Solving today’s challenges also requires empathy to engage with a range of different stakeholders - a sensitivity that we cultivate from childhood in the stories we read and the characters we encounter.
http://www.pwc.com/gx/en/ceo-survey/2013/key-findings/admired-leaders-leadership-attributes.jhtml

Re: Leaders CEOs most admire

Why not we consider a list of true Sri Lankan business and most influential leaders. I have put it down here? So that members can vote or acknowledge.

Re: Leaders CEOs most admire

both GR and SF should be in that list.
Re: Leaders CEOs most admire