Both indexes gained notably during the week amidst the positive trends witnessed in U.S and Asian equity markets. U.S bond yields dropped significantly during the week, indicating the positive sentiment of markets towards the world’s largest economy in the face of current global economic downturn. However, employment and output figures from the Euro zone continued to deteriorate where PMI index fell below 50 for Germany’s industrial output in April indicating contraction. Furthermore, France, Spain, Italy, Portugal, Greece and Cyprus unemployment levels have hit record high levels reaching 10.6%, 27.2%, 11.6%, 17.5%, 27.2% and 14% respectively while the overall unemployment rate for Euro zone economies remain at 12%. Given that EU is U.S’s largest market for her exports, conditions in Europe may affect bilateral trade between the two economic zones in the medium term. However, the continuation of expansionary monetary policy in U.S despite the significant cuts in government spending assisted the rise in U.S markets as opposed to European markets which are engulfed with heavy fiscal tightening.

Upward revision in electricity tariffs is likely to cause a dip in market interest rates and a strengthening of the LKR in the medium run and a further strengthening of the local banking system by improving the asset quality of the two large public banks in the medium term. Sri Lanka’s equity market gained notably during the week partly on account of these developments where the highest contribution was made by the banking, diversified and manufacturing sector counters.

Interest was seen across the board where the week’s turnover level was driven mainly by large cap counters representing a number of sectors such as banking, food & beverages, diversified, land & property, hotels and healthcare. This indicates that buying interest was well spread across both indexes and the positive sentiment has targeted a larger section of the economy. Nevertheless, banking sector counters such as Commercial Bank of Ceylon, National Development Bank, Sampath Bank and Pan Asia Bank contributed circa 20% to the week’s turnover. In terms of the price movement of key sectors, the manufacturing sector witnessed the largest price increase by recording 3.3% WoW gain in the price index while hotels and travels sector increased by 2% WoW. On the back of these developments, the week saw an average turnover of LKR 978.4mn and an average volume of 77.7mn. It is also significant that the volume of shares traded during the week rose by as much as 69.6% indicating the fact that interest on mid and small cap counters have revived and retail participation in the market is gaining in momentum.

Active participation of investors lifts the ASI to cross 6,000 mark…….
The bench mark index crossed the 6,000 mark on Friday for a short period, whilst the indices made healthy gains for the week on the back of collective contribution made by retail, foreign and institutional investors. The bourse regained momentum with the activities being energized after witnessing profit taking towards the end of the last week.

Indices trended upwards during the week with majority of the counters ending in the green witnessing substantial price appreciation. Foreign interest was sustained especially in the banking counters where Commercial Bank spearheaded the list, whilst retail favourite counters such as Colombo Land & Development Company, Touchwood Investments, The Colombo Fort Land & Building, and Kalpitiya Beach Resort garnered heavy retail participation. This in turn propelled the ASI to rise sharply with the average weekly turnover being LKR978.4mn.

Further, the Central Bank (CB) revealed that the government crowding out of the private sector has eased for the month of February. Whilst the state borrowing continues to be high, private sector borrowing has witnessed a recovery in February from the slow down witnessed in January. The CB indicated that the government’s reliance on the domestic banking system is likely to come down with the expected adjustments to administratively determined prices and continued fiscal consolidation. It further indicated that the availability of additional funds subsequent to the government’s reduction in borrowings from the banking sector coupled with the options available to the banks to obtain cheap foreign borrowings is likely to stimulate private sector activities by opening doors for new investments. The aforementioned developments coupled with the expected fall in market interest rate are likely to improve equity market activities. Hence, we continue to advice investors to align their portfolios with fundamentally sturdy counters which are trading at attractive multiples and have promising growth prospects.
Source: Asia Wealth Management Research

Posts : 6053
Equity Stars : 15057
Reputation : 770
Join date : 2012-02-14
Interest on blue-chips helped shore up most of the losses caused by profit taking on small and mid-capped counters on Monday. Commercial Bank continued to witness private deals as foreign appetite seems to be focused on banking counters. Retail investors once again proved its thirst for speculation on Colombo Land & Development.

Market ended with positive returns with small caps gaining ground on Tuesday. Lion Brewery and Asiri Hospitals saw crossings of 0.5mn shares at LKR 360.00 and 3.0mn shares at LKR 14.00 respectively. These were the main contributors to the market turnover (a contribution of LKR 188.0mn and LKR 63.4mn respectively) followed by National Development Bank with LKR 56.6mn.

During the day ASI advanced by 11.09 index points (+0.19%) to close at 5,883.52 and S&P SL 20 Index advanced by 6.47 index points (+0.195) to close at 3,344.85. Daily market turnover was LKR 708.6mn.
Indices gained considerable ground helped by gains on Ceylon Tobacco Company and Chevron Lubricants on Wednesday. Retail favourite Colombo Land & Development rallied with solid activity. A major shareholder of Panasian Power reduced their stake whilst Hemas power was the buyer. The latter will be expanding its portfolio of power generating sites in effect. Investors speculated on Ceylon Tobacco Company announcing its interim dividend anytime soon. High dividend yielding counters are expected to see price appreciations in the short-term.

Investments and Colombo Fort Land & Buildings were some of today’s hot picks. 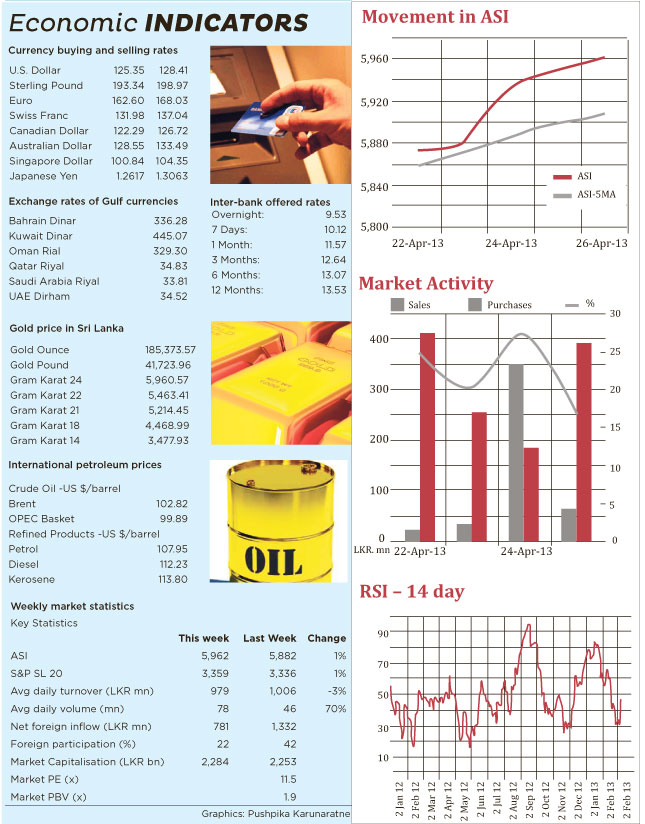 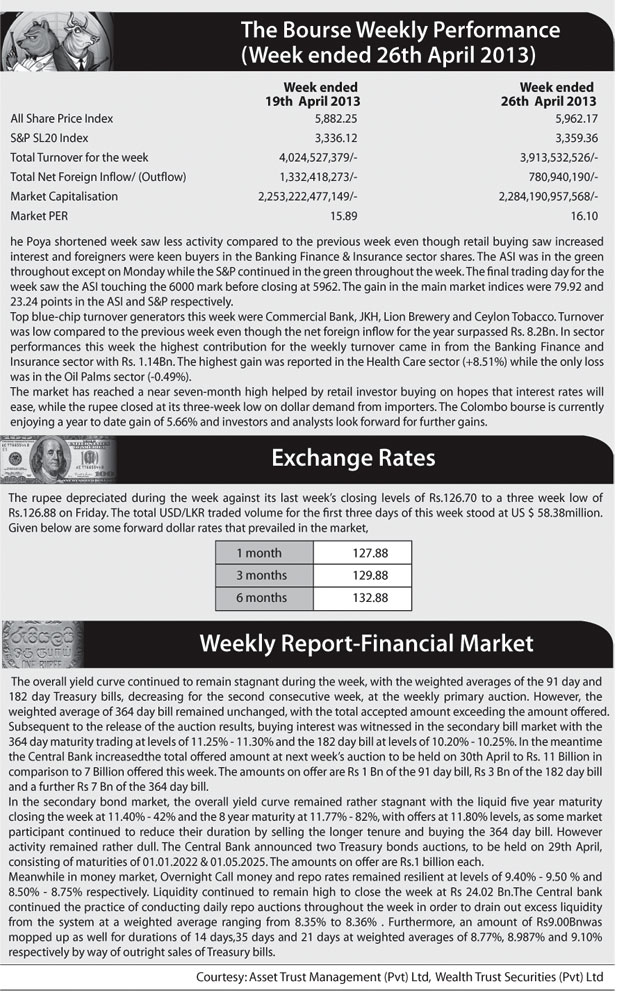 The market began the week in the red whereby the ASI lost marginally by 9.82 points (0.17%) to close Monday at 5,872.43 and the S&P SL20 index gained 2.26 points (0.07%) to close at 3,338.38 points. Turnover for the day was recorded at Rs. 885.3Mn. Net foreign inflow to the Colombo Stock Exchange surpassed the Rs 8 bn mark by the end of the day after witnessing overseas institutional funds investing over Rs 800mn on blue chip counter Commercial Bank. Top contributors to turnover for the day were Commercial Bank with Rs. 374.8Mn, Colombo Land & Development with Rs. 51.1Mn and Browns with Rs. 35 Mn. Foreign participation for Monday was recorded at 24.7% of total market turnover whilst a net foreign buying of Rs. 390.7Mn was recoded. Most active counters for the day were HVA Foods and Colombo Land & Development.

Market ended on Tuesday with positive returns as small caps gained some footing today. Lion Brewery and Asiri Hospitals saw crossings of 0.5mn shares at LKR 360.00 and Rs 3.Mn shares at LKR 14.00 respectively and closed at respective 52 week high prices. These counters were the main contributors to the market turnover (a contribution of LKR 188.0mn and LKR 63.4mn respectively) followed by National Development Bank with LKR 56.6mn. As the day advanced, ASI gained 11.09 index points (+0.19%) to close at 5,883.52 and S&P SL 20 Index advanced by 6.47 index points (+0.195) to close at 3,344.85. Daily market turnover was recorded at Rs 708.6mn. Foreign investors were net buyers for the 16th straight session with Rs 224.1 million worth of shares increasing the year to date net foreign inflow to Rs 8.42 bn (US$ 66.56 million).

Shares rose for the second straight session on Wednesday to record a near seven month high, backed by retail buying. This index gain was aided by gains on Ceylon Tobacco Company and Chevron Lubricants. Retail favorite Colombo Land & Development rallied showcasing solid activity throughout the day. ASI gained 50.21 points (0.85%) to close at 5,933.73 and the S&P SL20 index 13.66 gained (0.41%) points to close at 3,358.51. Turnover for the day was recorded at Rs. 975.3Mn. Foreign investors were net sellers for the first time in 17 sessions where they sold a net Rs 161.5 Mn worth shares on Wedesday though they still maintain their position as net buyers for this year as a whole. Notable gainers for the day were Industrial Asphalts up by 18.4% to close at Rs. 249.90 and Amana Takaful up by 13.3% to close at Rs. 1.70.

The market commenced operations on Friday after a Poya holiday which fell on Thursday and ended on a positive note. The ASI closed at roughly 29 points higher at 5,962.17 points while the S&P SL20 closed at 3359.36 points marginally higher by 0.85.

A turnover in excess of Rs. 1Bn (Rs 1.35 Bn) was recorded boosted by crossings in JKH, Colombo Land and Development Company, Free Lanka Capital Holdings and The Lion Brewery Ceylon PLC. The top traded counters for the day were Touchwood Investments PLC with a turnover of Rs 73 Mn, The Lion Brewery Ceylon with Rs 45 Mn and Kalpitiya Beach Resort with a turnover of Rs 43.8 Mn. A net foreign inflow of Rs. 327Mn was recorded for the day further attesting the positive sentiment displayed throughout the week.