The activities at the Colombo bourse trended upward during the week with foreign, institutional and retail investors being actively involved, whilst the benchmark ASI breached the 6,000 mark on Friday reaching its 16 month high. It’s noteworthy to mention that active participation from retail investors was one of the main reasons for the small to mid cap counters to gain points, whilst blue chip counters too made noteworthy gains which in turn pushed the ASI to the 6,000 region. The ASI gained 51.01 points WoW to close at 6,013.18 points (0.9%), whilst the S&P SL20 Index gained 46.63 points WoW to close at 3,405.99 points (1.4%). Indices benefited mainly on the back of the gains made by John Keells Holdings (1.4% WoW), Lanka IOC (18.2% WoW), Commercial Bank (2.3% WoW), Hatton National Bank (3.7% WoW) and Ceylon Cold Stores (14.8% WoW).

We believe that the observed developments in macroeconomic factors such as improvement in trade deficit, drop in inflation, positive outlook of IMF on country’s economy and the expectations of a fall in market interest rates have boosted investors’ sentiment. The data released by the CB revealed that the trade deficit during the first two months of the year has contracted by 20.3% YoY, despite export earnings falling 10.7% YoY, mainly due to imports falling at a faster pace of 15.6% YoY. Export earnings for the month of February was down 2.9% YoY due to the earnings from agricultural and industrial exports declining, however garments and textiles which constitutes c. 40% of the country’s total exports has increased 8.8% YoY. Further the state statistics indicated that the inflation for the month of April dropped to 6.4% from 7.5% in March.

In addition, the IMF projects a stable economic growth for Lankan economy for the next two years; 6.3% and 6.7% in 2013E and 2014E respectively which places the country’s growth above the average of South Asia. Hence, in light of the overall improvements in macroeconomic factors, we believe that the Colombo bourse will likely to continue as an attractive investment option over the other investment modes.

The week’s activities were largely driven by local investors, whilst the week witnessed several crossings on large cap counters such as Commercial Bank, Colombo Dockyard, John keels Holdings and some mid cap counters such as Tokyo Cement and Colombo Land. Colombo Land topped the turnover list adding c.14% towards the weekly turnover, whilst John Keells Holdings and Commercial Bank were amongst the top contributors driven by institutional interest. Moreover, retail play witnessed on several counters made them to reach their 52 week peak delivering hefty gains.

The week saw both indices ending in green possibly assisted by the expectations of a stronger LKR and lower interest rates following the upward revision of electricity prices by government authorities.

Furthermore, trade data for February 2013 indicates that the deficit in the trade account declined significantly by 20.3% YoY during the first two months of 2013 while net inflows to government securities grew as much as 102.4% YoY to USD 1.2 bn indicating the positive sentiment of foreign portfolio investors on the prospects of the Sri Lankan economy. On the back of these developments the Colombo bourse witnessed a positive momentum and a significant increase in both indices.

However, on the other hand, exports receipts for the first two months of 2013 fell 10.7% YoY to USD 1.5 bn mainly on the back of drop in industrial exports and the gross official foreign reserves of the monetary authority fell slightly to USD 6.7 bn in February from USD 6.9 bn in January. Furthermore, the 15.6% YoY drop in imports expenditure during the period under review is also likely to impact the revenue growth of the government given that approximately 60% of government tax revenue is derived through the imports trade.
Source: Asia Wealth Management Research

Retail play was shaky on Monday as most investors were booking profits whilst some were taking new positions to further benefit from the prevailing positive sentiment. Institutional participation was evident but was relatively overshadowed by its retail peers. ASI gained 5.45 points (0.09%) to close at 5,967.62 and the S&P SL20 Index gained 3.78 points (0.11%) to close at 3,363.14. Turnover was Rs. 846.6Mn.

Indices trended in and out of the red zone on Tuesday but retail selling forced the main index to falter. High dividend yielding blue-chips were seen trading above their previous closing prices. Treasury yields fell in weekly auction which might indicate that policy rates will see a drop in the next months’ review. Few blue-chips extended their 52-week gains which portrays a healthy market.ASI fell 14.43 points (0.24%) to close at 5,953.19 and the S&P SL20 index gained points 2.65 (0.08%) to close at 3,365.79. Turnover was Rs. 876.3Mn.

Foreigners were net buyers for the fifth consecutive day with a net foreign inflow of Rs.48.4mn. Foreign participation accounted for 22.7% of the market activity. 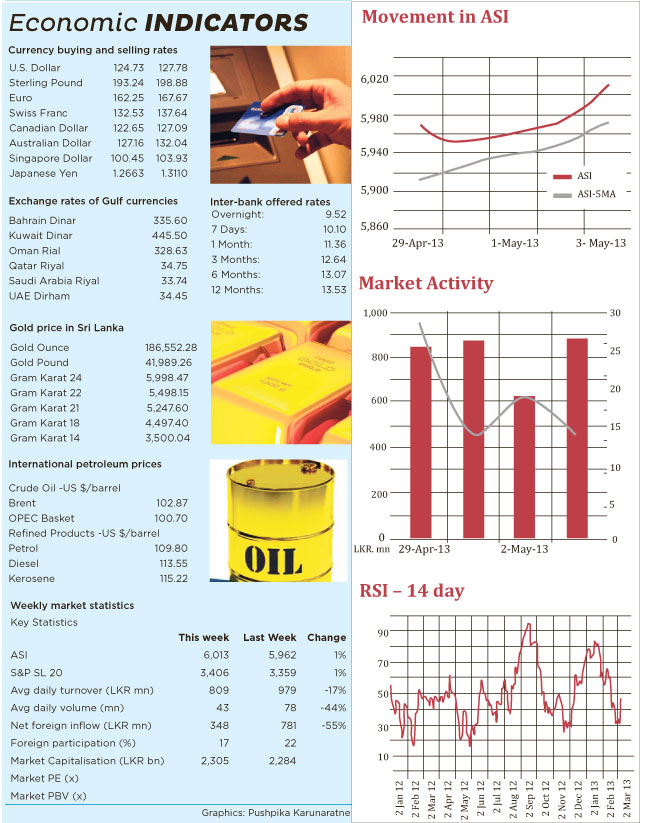 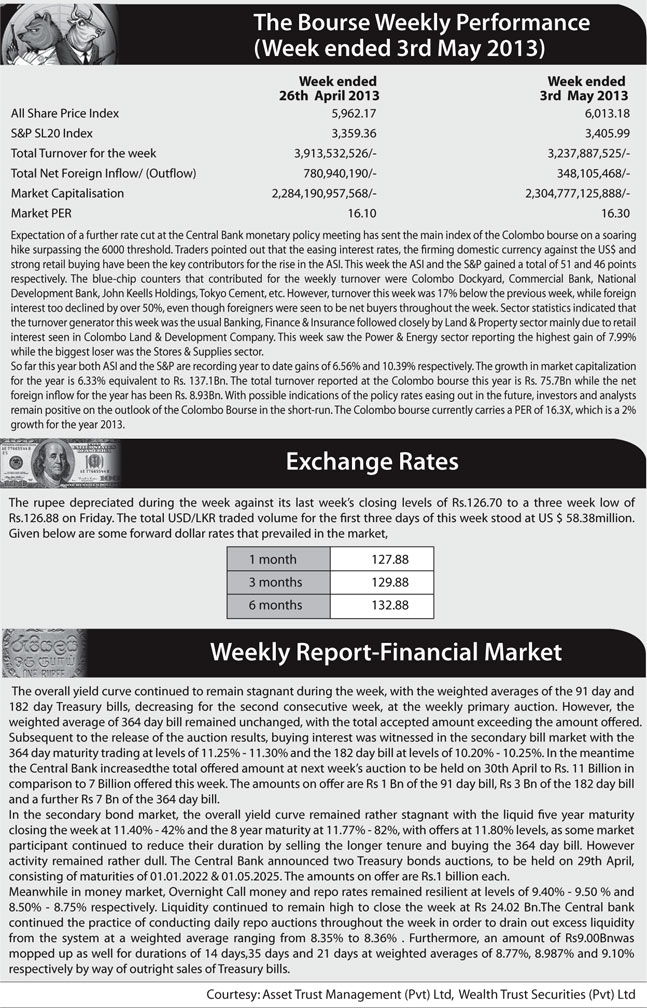