» Ban of chemical fertilizers is a great news
by ADVENTUS Today at 6:29 pm

* Hayleys, Lion Brewery among new entrants with upcoming issues worth Rs. 5 b 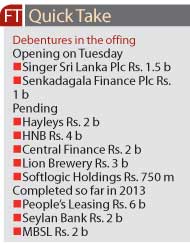 Boosted by a specific 2013 Budget move, the country’s listed debt market is set for a record year in 2013, judging by value of issues already completed and those in the pipeline.

The year so far has seen four firms raising Rs. 10.5 billion, whilst issues worth a further near Rs. 15 billion are in the offing.The best year for the listed corporate debt market was in 2010 with Rs. 15 billion raised and if most of the planned ones come through, 2013 will be a record high. As per value of issues done and slated, the figure stands at Rs. 25 billion.

Analysts linked the resurgence in listed debt market to the Government’s 2013 Budget exempting income tax on the interest income of corporate debt securities. This was to fast-track the development of the corporate debt market.

In the first quarter four issuers raised Rs. 10.5 billion, with People’s Leasing and Finance Plc coming with a mega issue of Rs. 6 billion. Others were Seylan Bank and Merchant Bank of Sri Lanka (Rs. 2 billion each) and Commercial Credit and Finance Plc (Rs. 500 million).

Two issues from Singer (Sri Lanka), a regular issuer, and Senkadagala Finance Plc will have their official opening tomorrow (21 May).

Singer (Sri Lanka) will raise Rs. 1.5 billion via an issuance of 10 million rated, unsecured, redeemable debentures at an issue price of Rs. 100 each with an option to issue up to a further five million debentures in the event the initial 10 million are oversubscribed.

The issue proceeds are to be used to lengthen the maturity profile of existing debt, thereby improving
Singer’s liquidity profile, and will help reduce interest rate risk. The debentures are rated in line with Singer’s existing unsecured redeemable debentures as they rank equally among themselves, and with Singer’s other unsecured debt, in the event of liquidation.

Fitch has assigned Senkadagala’s debentures with a rating of ‘BBB+’.

The debentures are rated at the same level as SFC’s National Long-Term Rating as they constitute direct, unconditional, unsecured and unsubordinated obligations of the bank.

The debentures are to be issued in two tranches with a maturity of three and four years, with fixed- and floating-rate coupon payments. The notes do not contain any deferral clauses and therefore Fitch has not assigned any ‘equity-credit’ to this issue. SFC expects to use the proceeds to fund balance sheet growth and to help reduce maturity mismatches between its assets and liabilities.

Managers to Senkadagala issue is Taprobane Wealth Plus Ltd., whilst Business Intelligence Ltd. is the
registrars.

A significant development is that the diversified blue chip Hayleys Plc is entering the listed debt market for the first time. The Rs. 2 billion worth of debentures has been assigned AA- rating by RAM Ratings Lanka.

Another new entrant is Lion Brewery, firming up a Rs. 3 billion issue. Those in the pipeline include Rs. 2 billion issue from Central Finance Plc and Rs. 750 million from Softlogic Holdings Plc.

Fitch Ratings has assigned HNB’s Rs. 4 billion debentures at A+. The debentures are rated one notch below HNB’s National Long-Term rating of ‘AA-(lka)’ to reflect their subordinated status. The debentures have a five-year tenure with bullet principal repayment at maturity. Coupon payments are at a fixed rate, and paid annually, helping the bank to reduce its exposure to interest rate risk. The debentures do not contain any deferral clauses and therefore Fitch has not assigned any equity credit to this issue.

HNB is to use the proceeds to fund its projected lending activities and to strengthen the bank’s regulatory Tier 2 capital base.

Lion Brewery’s Rs. 3 billion debentures have been assigned Expected AA- . Fitch will assign a final rating to the debenture subject to the receipt of final transaction documents conforming to information already received.

The proposed debentures are rated in line with Lion’s National Long-Term Rating of ‘AA-(lka),’ as they will rank equally with the company’s unsecured creditors. Lion aims to use the proceeds to fund the upgrade and modernisation of its plant in FY14 (ending March).

These debentures with maturity period of five years carried both fixed and floating interest rates.
In addition, last year three debentures were issued in the market by way of introduction.

The trading turnover of debentures listed on the Debt Securities Trading System (DEX) of the CSE however was significantly low at Rs. 75.7 million in 2012 compared to Rs. 2.7 billion in 2011.
http://www.ft.lk/2013/05/20/listed-debt-market-heads-for-record-year/

Co-Admin
Posts : 6822
Equity Stars : 21935
Reputation : 2855
Join date : 2011-02-01
Location : London
With two of the latest debenture issues successfully snapped up on their opening day, debt market analysts expect the next in line HNB’s Rs. 2 billion issue with an option to upsize by an equal amount in the event of an oversubscription, will meet similar demand too.

The upbeat sentiment is due to the attractive interest rates offered to the debentures as well as 2013 Budget incentive for issuers and investors alike.

As the Daily FT exclusively reported on Monday, the listed debt market is heading for a record year with Rs. 10.5 billion already raised and a further Rs. 15 billion worth of issues in the pipeline, two of which concluded early this week.

Singer’s issue was 10 million three-year rated, unsecured, redeemable debentures at an issue price of Rs. 100 each with an option to issue up to a further five million debentures in the event the initial 10 million are oversubscribed. The retail giant exercised the option and raised Rs. 1.5 billion.

HNB’s latest debenture issue of 20 million five-year unsecured, subordinated, redeemable debentures at Rs. 100 each with an option to issue a further 20 million in the event of initial 20 million is oversubscribed will be up for subscription from next Tuesday whilst official opening is on 6 June. The HNB debentures carry a coupon rate of 14% per annum.

In the 2013 Budget the Government exempted income tax on the interest income of corporate debt securities.
http://www.ft.lk/2013/05/23/with-singer-senkadagala-raising-rs-2-5-b-debt-market-awaits-hnbs-rs-2-b-issue/