“With the release of 1Q2013 corporate results season coming to an end, it is encouraging to note that consolidated revenues are up by 11%YoY for companies that have reported results so far. While the majority has recorded double digit revenue growth, bottom line profits have however come under pressure on the back of rising production costs which has resulted in margin erosion for several heavyweight and middleweights,” DNH Financial said.

This notwithstanding, several bellwether companies have surprised on the upside reporting robust earnings as a result of higher other income generation despite slower revenue growth. 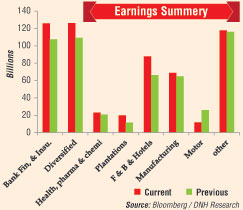 Focusing on the stock market, DNH said any significant investment exposure into Sri Lankan equities appears to have been restrained somewhat over the past two weeks due to global economic headwinds, decline in international equity markets and the lack of short-term opportunities.

“The majority of domestic investors appear to be waiting for either a short-term rally to participate in or a strong correction before entering the market. We believe that neither of these would eventuate and expect a gradual and healthy market re-rating over the medium to longer term,” it said.

In the absence of any significant market catalyst, DNH expects the Bourse to trade largely range bound in the coming week.

Corporate…
“Given the fact that most investors would now agree that the potential for short-term trading opportunities are markedly limited, selecting medium to longer term investments would depend on a number of parameters, most importantly the strength of the top line and the sustainability of the bottom line,” DNH said.

“While we do not rule out the importance of earnings as a strong indicator of growth, it is highly important to determine the source of profits, whether a result of actual top line growth or an increase in other (finance) income or a dramatic cut in costs that could have a negative impact on productivity in the longer term.

Consequently, we advise investors to focus on companies with a sustainable earnings model supported by firm top line growth and not overly relying on non-recurring income generation to support the bottom line,” it added.

“In balancing what we consider the compelling opportunities provided by the Sri Lanka Bourse, we see particular value in domestically-focused companies which should experience less earnings volatility against a relatively uncertain global backdrop. Among domestically-oriented stocks, we are buyers of selected counters in the consumer, industrial, diversified, banking and hotel sectors, which we believe are likely to attract investors who will appreciate their potential upside,” DNH said.

Although the overall valuation of the market appears relatively high (nevertheless still attractive vis-à-vis a number of other emerging markets), DNH is advising investors to break away from the herd, maintain a healthy investment horizon and focus on companies that will deliver quality earnings in 2013/2014.
http://www.ft.lk/2013/06/10/corporate-earnings-encouraging-dnh/