» SEMB the ASPH
by soileconomy Today at 9:31 pm

» Browns bullish on investments in local, international hotels
by SAGA Today at 8:23 pm

The week continued to witness downward momentum whilst most of the counters fell off the track due to profit booking witnessed across the board. World stocks also witnessed heavy volatility during the week amidst the World Bank’s cut in the global economic growth forecast for 2013, whilst concerns regarding a potential ease in the Central Banks’ efforts to support global economy also loomed fear among the global equity markets. During the week MSCI Frontier Market Index witnessed a WoW decline of 3.8% as at Thursday, whilst the MSCI Emerging Market Index also witnessed a WoW dip of 4.2%.

Moving our attention to the Colombo Bourse, the weekly turnover level was mainly enhanced by foreign and local institutional interest witnessed in conglomerate John Keells Holdings. However, the counter witnessed only a marginal WoW increase of 0.15% in its price to close at LKR266.0 as at Friday. In addition, institutional interest was also evident in Sampath Bank which secured the second place in the weekly top turnover calibre. The counter witnessed a single crossing during the week whilst ending at a WoW price decline of 6.1%. Further crossings were witnessed in counters such as Cargills Ceylon, Ceylon Tobacco Company, United Motors Lanka & Commercial Bank. In light of these activities bourse recorded an average turnover of LKR640mn during the week whilst the average volume was 26.6mn.

In addition, the week marked the full subscription of the first tranche of Anilana Hotels & Properties (AHAPL) IPO amounting to LKR480mn, whilst the company has decided to accept the applications for the second tranche of its IPO amounting LKR480mn.

Meanwhile, the week witnessed a decline in foreign participation where foreign purchase witnessed a decline of 56.1% WoW, whilst foreign sales witnessed WoW increase of 15.2% despite recording a net foreign inflow of LKR429mn. However, Colombo bourse still remains attractive at a trailing market PE of 12.5X compared to its nearest counterparts and the MSCI frontier emerging market index which trades at a PE of 13.6X.

The market shed further value for the third consecutive week, possibly due to profit taking witnessed in large cap counters and greater domestic investor interest in corporate debentures which provides an attractive tax free alternative to equity investments. Reaffirming this, corporate debentures issued by Lion Brewery and Central Finance were oversubscribed during the week.

The week continued to witness a decline in primary market yields of treasury bills and bonds as the Central Bank used its moral suasion on Commercial Banks in an attempt to lower market interest rates. Contemporaneously, the USD/LKR weakened by approx. 2% and hit a 6-month low over the week with importers expecting the LKR to depreciate further. This could be partly explained by foreign investors of domestic treasury securities locking in capital gains made in a declining interest rate environment prior to a further depreciation of the LKR. A declining interest rate environment could contribute to a weakening of the LKR due to a lack of demand for government securities as domestic rates becomes less attractive to foreign investors compared with other developing countries in the region. Nevertheless foreign investor interest in the CSE continued to persist as selected equities continued to trade at attractive multiples. As a result the YTD net foreign inflow was recorded at LKR16.3 bn by the end of the week.

In conclusion, if the Central bank is successful in persuading commercial banks to lower market interest rates, all firms in general would be positively impacted due to lower borrowing costs. However if the depreciation of the LKR persists, its impact on firm earnings would be more mixed. Specifically if the LKR depreciation persists, export oriented and tourism sector firms may be positively impacted whilst manufacturing firms which heavyliy rely on imported raw materials and firms with large foreign borrowings may be negatively impacted.
Source: Asia Wealth Management Research 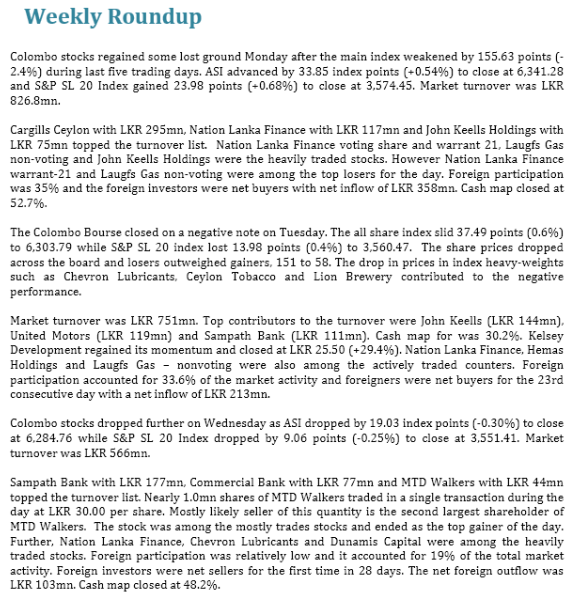 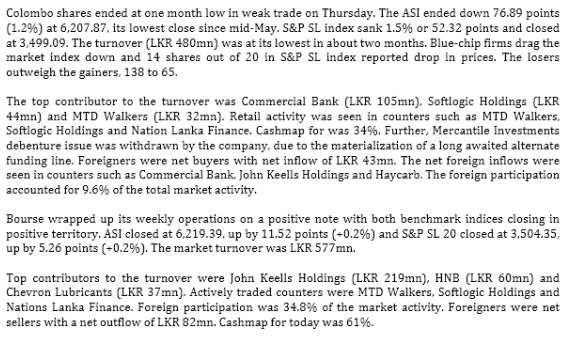 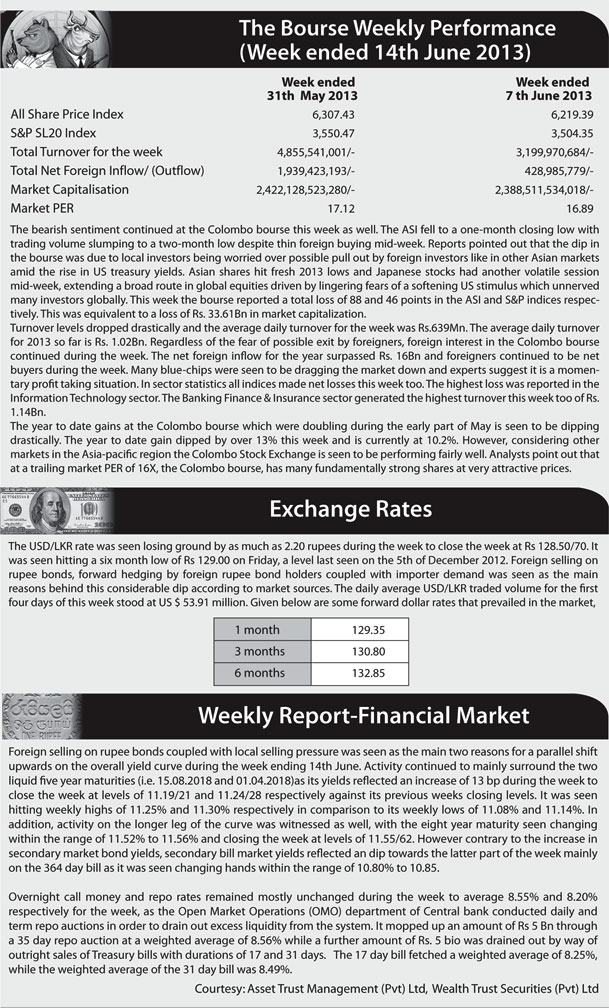 The Japanese stock market which had increased by 44% in the past two months came down by 5.1% due to profit taking on Thursday, that too helped to bring down the market on that day, sources told the newspaper.

Others said that the weakening of the rupee and the strengthening of the US economy were all negative features for the Colombo bourse, due to fears of the flight of foreign capital from the CSE to the US markets.

The bourse since the beginning of the year and up to Friday has had witnessed NFI of Rs. 16.1 billion.

On Wednesday too the bourse continued with its descent for the second consecutive day then, with sources attributing this decline to Central Bank of Sri Lanka (CBSL) allegedly administratively cutting down on bank lending rates.

This will erode banks’ profitability, in fact it were banking stocks that brought the bourse down, the sources said on Wednesday.

The ASPI fell by 0.30% over the previous day’s close while the S&P SL 20 declined by 0.25% on a Rs. 566.3 million turnover on Wednesday. The bourse also experienced a net foreign outflow of Rs. 102.59 million, after making gains in the previous days.

The sources further said that two things might hasten the departure of foreign funds from the bourse. Those were the recent rupee depreciation coupled with the strengthening of the US economy (story on page 36).

Meanwhile the stock market on the previous day Tuesday, on the back of trades being done at prices lower than that of the previous day Monday (June 10), resulted in the benchmark ASPI falling by 0.59%, after gaining 0.54% the previous day and the S&P SL 20 by 0.39%, after increasing by 0.68% at the beginning of last week on Monday.

Rapid Gains
The market has gained too much, it has to fall, sources explaining Tuesday’s fall said. When asked whether that, ipso facto would mean that the bourse would fall on June 12 as well? The sources said that it was difficult to predict. But as events proved, the market did fall on Wednesday as well.

When asked whether as a result of the recovery of the US economy this would result in foreign funds withdrawing from the bourse and reinvesting in the US market, the sources said that will take place, but not in the immediate future.

The index heavy stocks that brought down the bourse on Tuesday, the sources further said. Commercial Bank, CTC, Caltex and Cargills, they all fell, the sources said; though index heavy blue chip JKH saw its price gain by Rs. 5 a share, but Caltex for instance fell sharply by Rs. 13 to Rs. 292 a share, they said.

Meanwhile on the previous day Monday (June 10), as predicted in these columns last week, where it was said that the decline which the stock market experienced then was a bottoming out case, was proved true with the market on Monday (June 10) gaining by 0.54% to 6,341.28 points over its previous day’s close on the ASPI and by 0.68% to 3,574.45 points on the S&P SL 20 Index.

The share prices of Index heavy CTC and JKH rising all contributed to these gains on Monday, sources said. Further, foreign interest in stocks such as Commercial Bank, Cargills and JKH also helped, they said.

The bourse may receive a further boost if rating agencies downgrade India from investment grade to junk status, the sources said. That may see an outflow of funds from the Indian markets into Sri Lanka’s capital markets, the sources said on Monday.

Though Sri Lanka too has junk ratings, there is no danger of those ratings being further downgraded unlike that of India’s, allegedly due to the non implementation of certain politically unpopular reforms and heavy fiscal and current account deficits facing the Indian economy, according to foreign news agency reports.
- Paneetha Ameresekere
http://www.thesundayleader.lk/2013/06/16/drying-up-of-foreign-inflows-hits-bourse/

Re: Drying Up of Foreign Inflows Hits Bourse