» Related party transactions in Banks cause concerns
by ChooBoy Yesterday at 10:59 pm

» Principal governmental and regulatory policies that govern the banking sector in Sri Lanka
by Lotus Eater Yesterday at 9:18 pm

» Ban of chemical fertilizers is a great news
by ADVENTUS Yesterday at 6:29 pm

» DIPD/HAYC/HAYL
by ADVENTUS Yesterday at 1:11 pm

On Friday a gold sovereign (about 8.1 grams) the most popular benchmark price was quoted around 47,500 rupees for 22 carats up about a 1,000 rupees from a day earlier.

In March gold sovereigns were around 54,000 rupees when international gold prices started to slide in the wake of a strengthening dollar.

The price of a sovereign could reach up to 51,700 to 52,000 rupees as the tax takes effect, unless gold prices fall further, industry players said. 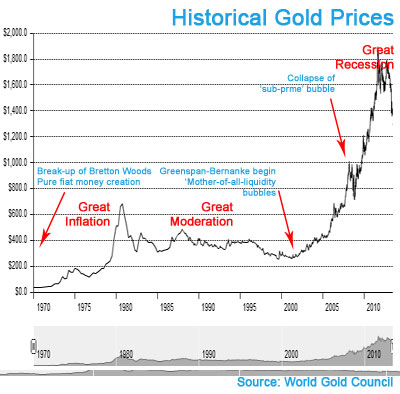 Following the collapse of the global commodity bubble in 2008, gold prices which peaked around 1,300 US dollars an ounce, fell to 800 - 900 dollars an ounce. It again started to edge up as the Federal Reserve started to print money.

The Fed has indicated that it will end its dangerous 'quantity easing' money printing exercises this year, helping boost the real value of the US dollar against real commodities, which can potentially make food prices cheaper for the world's poor and hungry.


During the 'Great Inflation' commodity bubble that ended in 1980 with co-ordinated US and British policy tightening, gold prices fell from close to 800 dollars and stayed below 300 US dollars during the so-called 'Great Moderation' period of the 1980s and 1990s.

Gold oil and other commodity prices against started to rise from the early 2000s as the Fed started its 'mother of all liquidity bubbles' which eventually created a global economic bubble which ended in the 'Great Recession'.