Capital market: An engine of growth?

Co-Admin
Posts : 6822
Equity Stars : 21921
Reputation : 2855
Join date : 2011-02-01
Location : London
A capital market is a significant aspect of every financial market. It is a market in which institutions and individuals trade financial securities. It comprises of the equity, bond, debt and derivative markets. A capital market comprises of both primary and secondary markets. A primary market is a market that issues new securities. Companies, governments and other groups obtain financing through debt or equity-based securities. A market where investors purchase securities or assets from other investors, rather than from issuing companies is identified as a secondary market.

The end of the 30-year war in Sri Lanka paved the way towards economic prosperity. The economy grew at a healthy rate of 6.4 percent in 2012 in the midst of the global economic downturn while inflation was maintained at a single digit for the fourth consecutive year. Sri Lanka experienced many developments in the recent past and has ambitious targets to achieve in the years to come.

It could be postulated that the Sri Lankan capital market would play a pivotal role in achieving rapid economic growth provided the market is efficient and competes with global markets through innovation. The article will unfold the importance of the capital market towards the Sri Lankan economy. 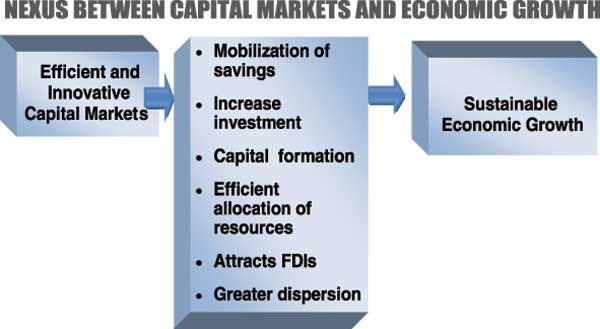 Mobilization of savings
The economy is expected to reach a level of over US $ 4000 per capita before 2016 and the gross investment needs to rise by 33 percent of the gross domestic product (GDP) to achieve the said target. From 2000 to 2012, the saving-investment gap was -4.2. The degree of productive investment and the amount people save greatly depend on the efficiency in the process of transferring savings to investments. A capital market mobilizes savings to the most important investments in the country.

For an example, by purchasing shares of a well performing company savers select the most important and profitable investments as they feel that it will bring them higher returns. This process could also lead to efficient allocation of resources and results in a competitive pricing mechanism.

An increase in investment towards 33 percent of the GDP as spelled out in Mahinda Chinthana should be fuelled by local and foreign investments. In such a context, the capital market can be utilized as a mode of attracting foreign funds.

There is a healthy trend of mobilizing savings towards large-scale investment projects that have socio-economic benefits like roads, highways, etc. Financing projects of this nature via the capital market is economically sustainable compared to financing through loans. Over reliance on loans as a mode of financing resulted in undue pressure on the country’s balance of payment and reserves.

Further, raising capital through the capital market is less costly compared to loans. Loans require a payment of interest until the capital is repaid, while funding through the equity market (by an Initial Public Offering) does not involve such interest payment. The company may give out dividends but even that is not compulsory. Productivity could be increased through low cost capital formation, low cost labour and by technological advancement. The lack of sufficient technology and high wages are impediments in competing with emerging markets to attract foreign direct investments and also increasing output of the country. It increases the cost of production and as a result discourages investments. Greater diversion towards the capital market as a mode of funding will address the issue at hand.

The current economic thinking is based on increasing the GDP by increasing government spending. Financing such expenditure through loans or foreign grants will not be sustainable. A developed capital (debt) market will assist the government in funding such projects and would be more conducive towards sustainable development.

Greater dispersion of risk
The Sri Lankan financial market is over dependent on the banking sector. There is an urgent need to develop deep and liquid bond markets that would enable corporate entities to directly raise funds from the debt market without resorting to banks.

Developed capital markets offer diversified instruments to choose from and one could select his/her portfolio based on his/her risk appetite. Diversity attracts more investment. This increases liquidity in the market.

The above stated reveals the importance the capital market holds towards the economy.

Equitable wealth distribution
A capital market encourages broader share ownership of productive companies. This promotes equitable ownership of a country’s wealth. Small investors are given an opportunity of having a stake in well performing companies. When companies are listed, the companies are accountable to the public. Thus, these companies incorporate healthy ruling practices as corporate governance and it would bring about stability in the corporate sector and build investor confidence.The market also acts as a gateway for the public to have a stake in government assets provided government/semi government institutions are listed. This could increase the productivity of the government sector.

Based on the above stated, it could be argued that the capital market could contribute towards the growth process in a considerable manner.

Unfortunately, the market has failed to play an active role until the recent past due to the 30-year war that tormented the country, lack of liquidity, lack of knowledge on how to invest in the capital market and lack of market innovation. Until 2009 (for 24 years) the All Share Price Index went up by only 1400 basis points.

The market experienced rapid growth with the end of the war. The All Share Price Index grew by 4250 points during the last three and half years. Market capitalization increased to about 30 percent of the total GDP in 2012.

Nevertheless, the Sri Lankan capital market holds untapped potential. If the market is to make a considerable impact on the economy, market capitalisation should increase up to 50 percent of the total GDP by 2016.

The achievement of such an ambitious target lies on the development of both the regulatory frame work and market instruments (based on innovation). The government and the Securities and Exchange Commission have taken the initiative to develop the local capital market. These initiatives are manifested through 10 key projects. If we are to face the rising demand for investment and to compete with global markets, our country should think beyond the equity market. Prudent measures are taken to develop the debt market while introducing other instruments as derivatives and futures. Another issue addressed was the development of financial infrastructure, increasing liquidity in the market and above all creating a fair and efficient market.

The Sri Lankan capital market is well poised to contribute towards the development process. It could be anticipated that the market might develop further as a result of the 10 key projects if the favourable macroeconomic/social conditions prevail.

“The idea of anticipation is a key to investing and to business generally. You can’t wait for an opportunity to become obvious. You have to think”
Eddie Lampert

* Mobilizing savings for investment
When people draw their savings and invest in shares, it leads to a more rational allocation of resources because funds, which could have been consumed or kept in idle deposits with banks, are mobilized and redirected to promote business activity with benefits for several economic sectors such as agriculture, commerce and industry, resulting in a stronger economic growth and higher productivity levels and firms.

* Facilitating company growth
Companies view acquisitions as an opportunity to expand product lines, increase distribution channels, hedge against volatility, increase its market share or acquire other necessary business assets. A takeover bid or a merger agreement through the stock market is one of the simplest and most common ways for a company to grow by acquisition or fusion.

* Redistribution of wealth
Stock exchanges do not exist to redistribute wealth. However, both casual and professional stock investors, through dividends and stock price increases that may result in capital gains, will share in the wealth of profitable businesses.

* Corporate governance
By having a wide and varied scope of owners, companies generally tend to improve on their management standards and efficiency, in order to satisfy the demands of these shareholders.

* Creating investment opportunities for small investors
As opposed to other businesses that require huge capital outlay, investing in shares is open to both the large and small stock investors because a person buys the number of shares they can afford. Therefore, the stock exchange provides the opportunity for small investors to own shares of the same company as large investors.

[b* ]Government capital-raising for development projects[/b]
Governments at various levels may decide to borrow money in order to finance infrastructure projects such as sewage and water treatment works or housing estates by selling another category of securities known as bonds. These bonds can be raised through the stock exchange whereby members of the public buy them, thus loaning money to the government.

* Barometer of the economy
At the stock exchange, share prices rise and fall depending largely on market forces. Share prices tend to rise or remain stable when companies and the economy in general show signs of stability and growth. An economic recession, depression or financial crisis could eventually lead to a stock market crash. Therefore, the movement of share prices and in general of the stock indexes can be an indicator of the general trend in the economy.
http://www.dailymirror.lk/business/features/31690-capital-market-an-engine-of-growth-.html