During the week, the policy decision taken by the Central Bank to cut the Statutory Reserve Ratio (SRR) by 200 bps came into effect on the 1st of July. Despite analyst fears, the LKR held steady within a narrow band as the Central Bank undertook open market operations and moral suasion in order to mop up liquidity. Despite the expected positive impact on equities arising from the monetary easing which is expected to lead to a drop in interest rates, investor sentiment was overwhelmed by the downgrade by Moody‟s of Sri Lanka‟s sovereign credit rating from Positive to stable which resulted in the market ending the week in the red. The report‟s negative outlook was further compounded by the disappointing fiscal data which has missed the income and expenditure goals set out by the government.

In addition a number of crossings were witnessed in Banking & Finance sector counters Including Commercial Bank, Nations Trust Bank & Janashakthi Insurance as well as in large cap counters such as Carsons Cumberbatch and Chevron Lubricants.

Conclusion:
The bourse slumps amidst concerns regarding LKR depreciation and rating outlook cut

Bourse trended upward during the first two days of this week, however it began to shed points from mid week possibly due to the concerns arising from the rating outlook cut by Moody‟s Investors service and the weakening of the LKR. Country faced this rate cut on the back of rising bank foreign debt, continuing budget deficit and high state borrowings which could weaken the external payments position. Nevertheless, the GOSL has taken measures to stabilise the external payments position since early last year whereby the foreign exchange reserves stabilised at USD 6.9bn as of April 2013. Meanwhile the data released by the Finance Ministry revealed that the State revenues and grants for 1H2013 fell c. 3.9% YoY to LKR509.4bn, whilst the expenditures rose c.3.3% YoY to LKR861.6bn with the budget deficit expanding 16% YoY to LKR352.2bn. Further, the rupee depreciated c. 0.16% WoW possibly owing to the foreign loans of the banking sector that are maturing during this month, however the depreciation was restricted owing to selective intervention by the CBSL.

With regard to market activities, large scale transactions supported by foreign and institutional investors on selected counters dominated the bourse, whilst retail interest was focused on few small cap counters. Foreign investors‟ position for the week reversed from last week‟s net out flow to a net foreign inflow of LKR490.2mn. Banking counters such as Nations Trust Bank continued to garner foreign interest throughout the week, whilst Commercial Bank and Carson Cumberbatch saw significant out flow during the week. However, we urge the investors to take positions in stocks from selected sectors which are likely to benefit from the recent changes in the macro environment. As discussed in our last weekly report, we are optimistic on the Banking sector following the SRR cut and the cut in policy rates, which is likely to bring down the market interest rates and boost the private sector credit growth. However, banks which have high exposure to gold backed loans are likely to be challenged by the declining gold prices. Further, companies involved in construction activities and companies involved in construction related activities are likely to benefit from the ongoing development activities and the possible drop in market rates which in turn boost private sector construction activity. While Manufacturing sector is likely to face challenges from the rise in energy costs, companies who have the ability to pass on the cost increase to end customers and the companies who have internalized their energy requirements are likely to outperform their peers in the sector.
Source: Asia Wealth Management Weekly review 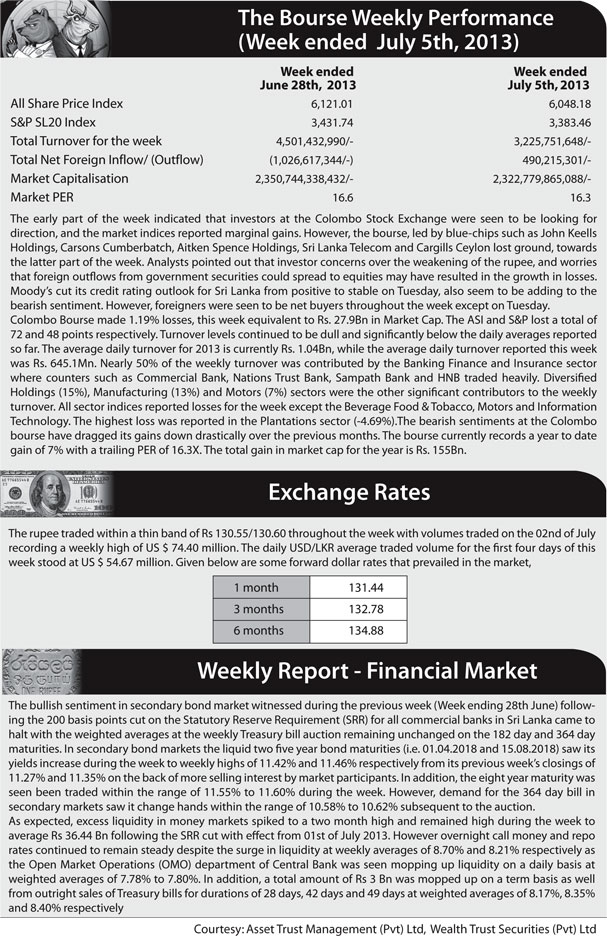 Market ended in green territory on Tuesday where positive returns were recorded in both indices. ASI gained 8.04 points (+0.13%) and S&P SL20 Index gained 14.77 points (+0.43%). price appreciations in index heavy John Keells Holdings and Chevron Lubricants contributed positively to the index performances. Market turnover was LKR 473mn. Carsons cumberbatch with LKR 88mn, Hatton National Bank with LKR 84mn and Sampath Bank with LKR 40mn were the top contributors to the market turnover. PC House was the heavily traded stock during the day. Retail investors rallied around Central Investment & Finance and the stock was traded heavily with the speculation on improvements in future performances under the newly appointed managing agent. Textured Jersey and Touchwood Investments were among the mostly traded stocks. Foreign participation was 29% and foreign investors were net sellers.

On Wednesday Colombo Shares retreat after four consecutive days’ gains on domestic and international economic concerns. Benchmark All Share Index dropped by 22.82 points (-0.37%) and S&P SL 20 Index dropped by 29.51 index points (-0.85%). Market turnover was LKR 883mn. Lanka Ceramics topped the turnover list with LKR 288mn followed by Janashakthi Insurance (LKR 167mn) and Sampath Bank (LKR 52mn). Touchwood Investments, Central Investment & Finance and PC House were the heavily traded stocks during the day and those closed among the top losers. At the end of the day foreign investors were net buyers and foreign activity accounted for 29% of the total market activity.

Market wrapped the weekly operations on Friday in negative territory. ASI closed at 6,048.18, down by 24.99 points (-0.41%) and S&P SL 20 Index end at 3,383.46, down by 16.00 points (-0.47%). Daily market turnover was LKR 570mn. Total value of the crossings accounted for 51% of the market turnover. United Motors with LKR 243mn, John Keells Holdings with LKR 54mn and Chevron Lubricants with LKR 33mn were the top contributors to the market turnover. Touchwood Investments, John Keells Holdings and Central Investment & Finance were the actively traded stocks during the day. Foreign participation was 35% and foreign investors were net buyers with a net inflow of LKR 279mn. Cash map closed at 46.0%. 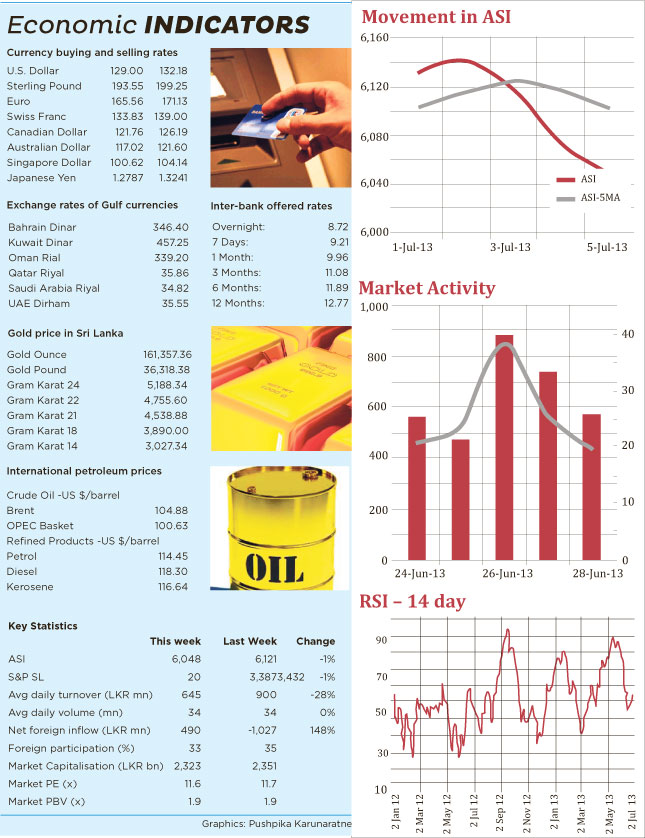