Colombo bourse began the new trading week on Monday with a decline, adding to the weakness of the previous trading week. ASI dropped by 52.54 points (-0.87%) and closed below the psychological 6,000 level mark for the first time in two months. S&P SL 20 Index dropped by 31.97 points (-0.94%). Price depreciations in blue-chips such as John Keells Holdings by LKR 8.50 (-3.4%), Carsons Cumberbatch by LKR 10.00 (-2.3%) and Ceylon Tobacco by LKR 9.40 (-0.9%) dragged the index down. Market turnover was LKR 414mn. John Keells Holdings with LKR 100mn, Nations Trust Bank with LKR 88mn and Touchwood Investments with LKR 25mn were the highest contributors to the daily turnover. John Keells Holdings, Touchwood Investments and PC House were the mostly traded stocks for the day.

Colombo stocks snapped the five day losing streak and ended on positive territory on Wednesday. ASI gained 35.89 points (+0.6%) led by price appreciations in index heavy counters such as John Keells Holdings, Sri Lanka Telecom and Ceylinco Insurance.. S&P SL 20 index gained of 17.12 points (0.5%) during the day. Market turnover was LKR 228mn. John Keells Holdings (LKR 54mn), PC House (LKR 17mn) and Touchwood (LKR 14mn) were the top contributors to the days’ turnover while PC House, Touchwood and PCH Holdings were among the heavily traded counters of the day. Interest rates on treasury bills fell by 2bps across all maturities in today’s auction with rates on three, six and twelve months reaching 8.63%, 9.68% and 10.64% respectively.

Market ended with positive returns on Thursday mainly due to the price appreciations in large cap stocks such as John Keells Holdings, George Steuart Finance and Dialog Axiata. These three stocks together contribute 59% of the ASI improvement. ASI gained 46.33 points (+0.77%) and S&P SL 20 Index gained 27.82 points (+0.83%). Daily market turnover was LKR 242mn. John Keells Holdings was the top contributors to the market turnover with LKR 40.5mn followed by Lanka IOC with LKR 21.1mn and Ceylon Tobacco with LKR 10.3mn.

On Friday stock market ended the week trading on negative note. Benchmark broad market index lost 33.64 index points (-0.55%) to close at 6,028.74 and S&P SL 20 Index lost 7.47 points (-0.22%) to end at 3,385.43. Daily market turnover was LKR 329mn. PC House was the top contributor to the market turnover with LKR 75mn followed by John Keells Holdings (LKR 44mn) and Lanka Tiles (LKR 29mn). PC House is the mostly traded stock where nearly 61mn shares which accounted for 26.5% of the issued shares traded during the day. PC House closed at LKR 1.20, down by 8%. Further, Ceylon & Foreign Trades and John Keells Holdings also were among the heavily traded stocks. Foreign participation for the day was 13% and foreign investors ended as net buyers with a net inflow of LKR 43mn. Cash map closed at 42.0% for the day.

During the week market capitalization deteriorated by 2% and ASI lost 19 points (-0.3%). S&P SL 20 Index managed to close with a marginal improvement of 2 points (+0.1%). Aggregate turnover of the week dropped by 55% and trading volume dropped by 33% compared to the previous week.

Sri Lankan stocks lost steam during the week, as a result of high net worth individuals, institutions and foreign investors being relatively inactive throughout week. Market initiated the week dragging down the indices, where the main share index fell off the 6,000 mark. Market however, picked up towards midweek, which lost field towards the end of the week to wrap up on a negative note. Meanwhile, sundude foreign participation along with the cautious approach adopted by local investors, resulted in weak daily turnovers and volumes.

Movement of the indices over the week was mostly dominated by the hype that arose on index heavy weight John Keells Holdings with respect to its colossal USD 650mn “Mixed development” project. As a result, indices picked up during Wednesday‟s trading, and sustained up-to the closure of trading on Thursday. However, uncertainty over the mode of financing of the project, contradictions in the project value and lack of clarity with regard to the project created negative vibes on investors, resulting in a price dip in John Keells Holdings, which in turn pulled down the market to end on a negative note on Friday.

In addition, trading throughout the week witnessed only a single crossing transaction on Nation Trust Bank, where c. 543k shares traded at LKR 65.0. John Keells Holdings, emerged as the highest contributor adding LKR 274.2mn to the week‟s turnover tally, followed by PC House Holdings, Nations Trust Bank and Samapth Bank, where all transaction were purely on the normal board.

Meanwhile, PC House recorded the highest traded volume for the week, where the counter witnessed large block trades on the normal board at LKR 1.20 and LKR1.30 during Friday‟s trading. Close upon 61mn shares got traded on Friday, resulting in a cumulative figure of c.79.5mn shares being traded during the week. In addition, Touchwood Investments, Central Investment& Finance and Blue Diamonds Non-voting were amongst the other counters that recorded considerable share volumes.

The week saw foreign purchases amounting to LKR299.7mn whilst foreign sales amounted to LKR173.4mn. Market capitalisation stood at LKR 2,315.4bn, and the YTD performance is 6.8%.

The stabilization of the LKR by the monetary authorities in the face of severe depreciation pressure has safely evaded the threat of foreign investors divesting from government paper, which could have led to a full scale flight of capital destabilizing the domestic financial system. The fact that stabilization of the LKR by CB intervention has prevented a foreign selloff (however, at the expense of foreign reserves) is firmly indicated by foreign net selling from government securities falling to circa LKR 100 million during the week ending 5th July, a negligible figure from over LKR 4 billion sold during the previous week. A further depreciation of the currency could have led foreigners to cut forex losses and divest their treasury portfolios leading to a full scale flight of capital from the economy. Possibily due to these fears and the negativie sentiment arising from last week‟s downgrade by Moody‟s, trading at the Colombo Bourse remained sluggish during the week indicated by significantly low daily turnover levels. Further, as expected, the Fed Chairman Ben Bernanke made the announcement that U.S. stimulus measures to revive world‟s largest economy from ailing growth would not be tapered in the „foreseeable future‟ on account of the persisting weakness in the U.S. recovery. Hence, as suggested in our previous reviews U.S. monetary policy should not be a cause for concern for the trading activity of Colombo Bourse in particular and emerging and frontier markets in general given that it is expected to remain “accommodative” for a period which the Fed Chairman notes “long-term”. 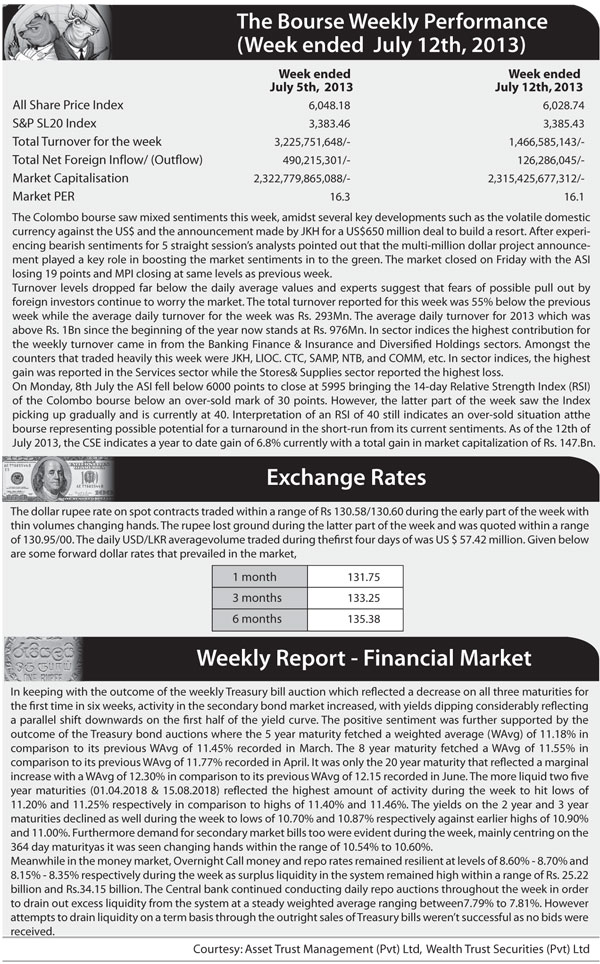