Market began a fresh week on Monday with mixed sentiment where ASI marginally declined to end 0.14% down which is a drop of 8.87 points. However, S&P SL 20 Index managed to gain 2.63 points (+0.08%) with the support of the price appreciations in index weighted stocks. Daily market turnover was LKR 1.1bn. HNB non-voting recorded the highest turnover of LKR 828mn. Further John Keells Holdings with LKR 72mn and Commercial Bank with LKR 50mn were the next top contributors to the market turnover. Meanwhile Expo Lanka, Nations Finance and Nestle were among the mostly traded stocks during the day. Foreign participation for the day was 47%. Foreign investors were net buyers with a net inflow of LKR 848mn.

On Wednesday bourse closed in negative territory led by price declines in index heavy blue-chips. All share price index dropped by 107.67 points (-1.73%) and S&P SL 20 index decreased by 59.81 points (-1.71%). Daily market turnover was LKR 954mn. Sampath Bank with LKR 506mn, John Keells Holdings with LKR 95mn and Union Bank with LKR 54mn emerged as top contributors to the market turnover. Shares of Union Bank were heavily traded today due to rumors and media reports on possible acquisition by the cash-rich National Development Bank. Nation Lanka Finance and John Keells Holdings were also among the heavily traded stocks. Foreign investors were net buyers with a net inflow of LKR 337mn and foreign participation was 49% of the market activity.

Market extended losses further on Thursday as ASI slumped by 30.79 index points (-0.50%) and S&P SL 20 Index dropped by 12.10 index points (-0.35%). Daily market turnover was LKR 653mn. John Keells Holdings with LKR 203mn, Hemas Holdings with LKR 177mn and Commercial Bank with LKR 82mn were the top contributors to the market turnover. Meanwhile Sanasa Development Bank, John Keells Holdings and Panasian Power were the mostly traded stocks during the day. Foreign participation for the day was 69% whereas foreign investors were net sellers with a net outflow of LKR 92.5mn.

Further, Vallibel One, Access Engineering and Expo Lanka attracted heavy retail investor interest during the day. Meanwhile 45% of the market activity was driven by foreign investors and foreign investors were net seller with a net outflow of 72mn.

ASI recorded its biggest weekly loss in 16 months as index fell throughout the week on index heavy blue chips amid foreign buying. ASI fell by 4.5% (281.38 points) to end at four month low of 5,951.83. Price depreciation in heavy market cap stocks such as Ceylon Tobacco by 19%WoW, Ceylinco Insurance by 15%WoW, Nestle by 10%WoW and John Keells Holdings by 6%WoW contributed negatively to the weekly performance. Interestingly foreign investors were quite active during the week and foreign participation further improved to 51% from 44% week ago. Foreign investors were net buyers during the week with a total net inflow of LKR 1.0bn. Year-to-date net foreign inflow was LKR 17.8bn.

Cautious investor approach amidst weakening LKR and lower than expected corporate earnings in 2QCY2013 crippled market sentiments dragging down the indices towards the negative territory. The benchmark index fell below its 6,000 mark on Friday whilst counters witnessed across the board dips throughout the short week. Daily activities were predominantly energized by crossings witnessed on selected blue chips whilst retailers picked on the penny stocks.

Investor confidence on the Banking Finance and Insurance sector was demonstrated as the sector accounted for the highest turnover during the week. Hatton National Bank (non-voting) topped the list accounting for c.23.0% of the total turnover tally, as a result of the 7mn share crossing at LKR 117.5 that took place on Monday. In addition, other notable turnover generators were Samapth Bank, HDFC Bank and Commercial Bank, which encountered share crossings during the week.

Further, diversified John Keells Holdings, Hemas Holdings; and The Lion Brewery of Ceylon from the Beverage Food and Tobacco sector also witnessed crossings during the week. Moreover, the hype that was created subsequent to a news paper article indicating a possible deal on Union Bank, pushed the counter to record a notable turnover during the week.

However, the counter pared the initial gains subsequent to the denial made by the two parties over the deal to end the week at LKR 16.6, down 1.8% WoW.

Conclusion: Bourse loses grip as investors adopt a cautious approach…
The Colombo bourse headed south throughout the week with both the indices losing sharply paring the gains made during last week. Meanwhile, the bench mark ASI fell below the 6,000 mark on Friday, whilst both the indices plunged more than 2% during the day due to the price dips witnessed across the board led by few large cap counters.

Food Beverage and Tobacco sector counters Ceylon Tobacco and Nestle Lanka which witnessed foreign and institutional participation over the recent past lost 19% and 14% WoW respectively during the week, however registering YTD return of 52% and 48%. Despite the indices losing momentum, large scale transactions that dominated the week’s activities pushed the week’s turnover level recording an average weekly turnover of LKR928.8mn, an increase of 17% WoW. Mixed corporate earnings for 2QCY2013, continuous fall in LKR (which depreciated c. 0.6% WoW) and the news on foreign funds gradually pulling out of the regional markets in favour of developed markets such as US would have possibly caused the investors to adopt a cautious approach as the bourse witnessed heavy selling across the board. Further, the external data released by the CBSL yesterday indicated that the import expenditures witnessed a faster growth (15.3% YoY) than export earnings (6.8% YoY) for the month June resulting in widening of trade deficits.

Further, the regional markets and currencies also witnessed steep dips during the week, due to funds pulling out of these markets (which have been witnessing a slowdown in theri economies), in favour of the US which has showed signs of recovery. This was triggered subsequent to the Federal Reserve’s July meeting minutes which indicated a possible tapering of the stimulus. However, the emerging markets gradually picked up during Friday’s trading subsequent to the positive economic indicators that came in from the US, China and Europe.

Meanwhile, the Colombo bourse witnessed a net foreign inflow during the week with a WoW increase of 3%.

Investor participation has been persisting on Sri Lankan equity market presumably due to the relatively higher growth prospects of the Sri Lankan economy cf. regional peers and the strong growth profiles posted by selected listed companies. However, continuous fall in LKR will remain a challenge to the companies that are largely depending on imported raw materials for their production, whilst it would favour companies who earn revenue in USD.
Source: Asia Wealth Research 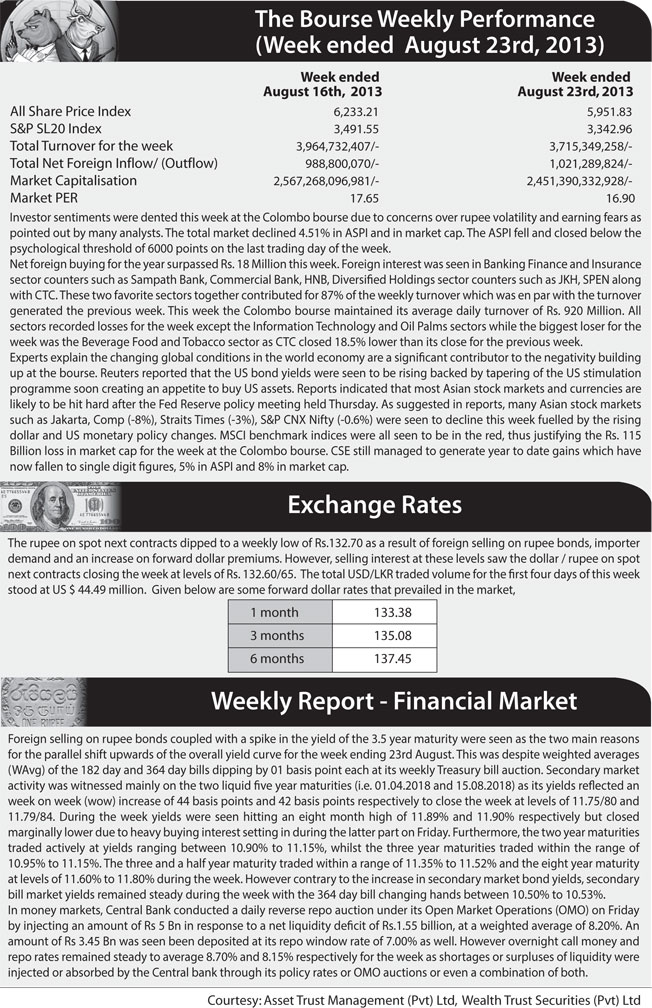