On Tuesday market snapped the five day losing streak and broad market index ended on positive territory. ASI gained 27.69 points (+0.47%) aided by price appreciation in index heavy counters while S&P SL 20 index decreased by 8.30 points (+0.89%). Daily market turnover was LKR 503mn. John Keells Holdings, the mostly traded stock topped the turnover list with a turnover of LKR 179mn. Further Distilleries with LKR 39mn and National Development Bank with LKR 28mn were the next top contributors to the daily turnover. Meanwhile John Keells Holdings, Valliable One and Nations Finance were mostly traded stocks during the day. Foreign participation for the day was 31% whereas foreign investors were net sellers with a net outflow of LKR 96.2mn.

Stock market managed to regain ground on Thursday as All Share Price Index advanced 71.86 points (+1.25%) and S&P SL 20 index increased by 55.03 Points (+1.71%). Market turnover was LKR 511mn. Sampath Bank with LKR 124mn, John Keells Holdings with LKR 111mn and Peoples Finance with LKR 81mn emerged as top contributors for the day. Meanwhile John Keells Holdings, Touch Wood and Nations Lanka were among the mostly traded stocks for the session. Foreign participation accounted for 19% of the total market activity and foreign investors were net buyers with a net inflow of LKR 112mn.

Lee Hedges announced singing of a sale agreement with AVIC International Hotels Lanka Ltd (AVIC) for the sale of property situated at No.418, R.A.De Mel Mawatha, Colpetty commonly known as ‘Colpetty Mills’ in extend of One Acre and Twenty One and decimal Fifty eight perches at a total sale price of LKR 1,240,000,000.00 only subject to obtaining the approval of the shareholders of the company. The capital gain from above transaction amount to LKR 1,067mn (per share LKR 209.00) and the stock closed at LKR 249.90 (+7.8%).

The bench mark ASI plunged to its almost five month low during mid week mainly due to heavy weight John Keells Holdings slumping sharply (c.10%) consequent to the announcement made by the company regarding a rights issue attached with warrants, whilst selling witnessed on several counters aggravated the down fall. However, John Keells Holdings gained momentum towards the latter part of the week, whilst the bourse recovered slightly from its 5 month low on the back of renewed buying interest witnessed on selected counters. Foreign investors’ remained net buyers after witnessing net selling during the first few days of the week, however, cf. last week, foreign activities during the week were far below as the net foreign inflow dropped 82%WoW.

During the course of the week, the LKR hit its all time low of LKR135.20 on Wednesday before recovering slightly, whilst the CBSL today imposed a 100% margin deposit requirement on letters of credit for car imports to slowdown the imports amidst weakening Indian Rupee which is likely to trigger the car imports in the period ahead.

However, KIA motors, a subsidiary of Colonial Motors will continue to import and market KIA range of vehicles. In addition, Cargills (Ceylon) released an announcement regarding its proposed restructure of retail operation. According to the announcement, Cargills Foods Company (Pvt) Ltd, a fully owned subsidiary of Cargills (Ceylon) will carry out the retail operations of the group and Cargills (Ceylon) will continue as an investment holding company for Retail, Food manufacturing, Brewery, Leisure & property development and Strategic investment sectors of the group.

On the other hand, foreign investors ended up as net sellers of government securities to the tune of circa
LKR 10 billion during the week ending on 28th August reflecting the regional trend in the flow of portfolio
investments from emerging markets to developed markets. The imposition of 100% margin deposit
requirements by the Central Bank today against the Letter of Credit’s opened with commercial banks for
the import of motor vehicles is a measure taken in this regard to limit the importation of non essential
vehicles and thereby lessen the pressure on the LKR to depreciate without adversely affecting the supply of
essential imports to the country.
Source: Asia Wealth Management Research 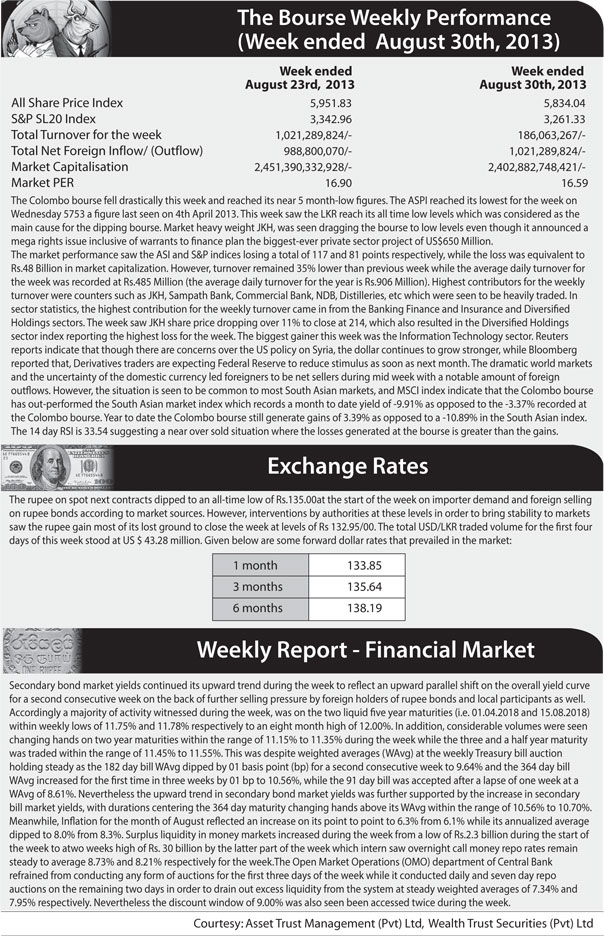